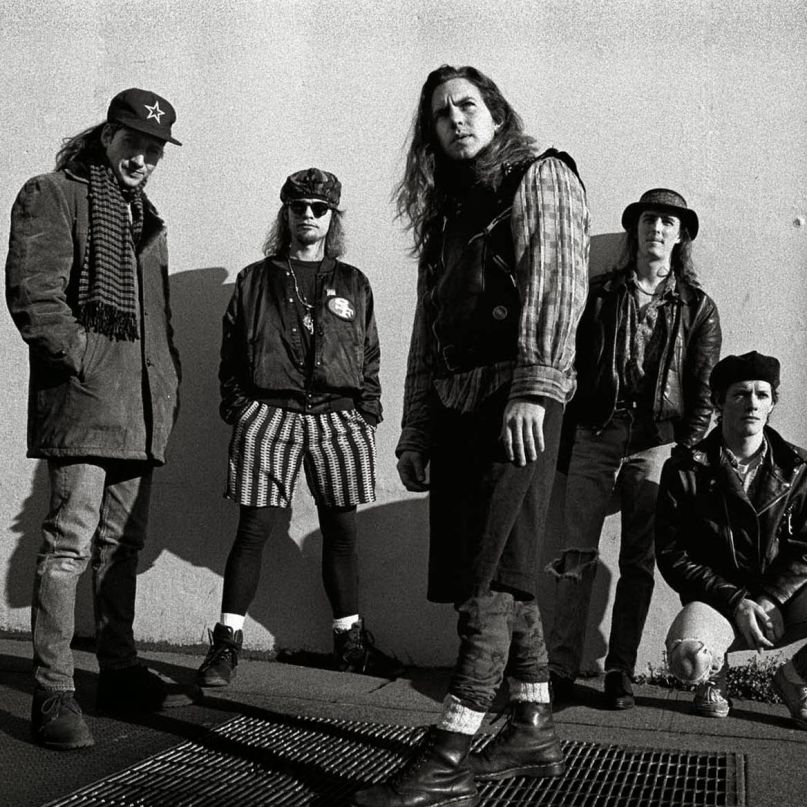 October 22, 1990. Stone Gossard and Jeff Ament, previously of Mother Love Bone, took the stage with their new band: Mookie Blaylock. It was an important moment in many ways.

For starters, it was their first true show since MLB frontman Andy Wood’s tragic death. The set also included a new lineup featuring lead guitar player and friend of Gossard’s, Mike McCready, drummer Dave Krusen, and a San Diego-based surfer named Eddie Vedder. This marks the concert as a significant point in music history: the beginning of Pearl Jam.

Today marks 25 years since Pearl Jam’s first show. To honor the occasion, we have selected 25 of the most unique Pearl Jam performances over that span. While it is certainly true that every Pearl Jam show has its own unique element to it, here is a collection of rarities that are in a class of their own.

Where it all began. First song of the first show. Only days after Vedder’s arrival in Seattle, the band took the stage at the Off Ramp before an audience that included Chris Cornell, Randy Johnson, and many other Seattle icons.

The band had just flown in from Europe, wrapping up an extensive tour. They agreed to do the MTV Unplugged show after successfully playing in similar fashion a few weeks before. Not knowing what to expect, they delivered one of the more sincere performances in the show’s history. The aired program ended with this epic version of “Porch”.

Yes, it’s a music video, and the storyline is extreme. But just watch Vedder’s eyes throughout. For many music fans who were either just being introduced to the power of music or migrating away from hair metal, this says it all.

After inducting The Doors into the Rock and Roll Hall of Fame, Vedder performed “Roadhouse Blues”, “Break on Through”, and “Light My Fire”. The Doors have had numerous singers take on Jim Morrison’s spot over the years, but nothing quite like this as they etched their names in rock history. Seemingly a natural pairing.

On the heels of Vs. being released, Pearl Jam performed “Animal” at the 1993 VMAs on MTV and took home four awards for “Jeremy”. They concluded the night by performing with Young.

During the Saturday Night Live outro, Vedder opened his jacket to reveal a K drawn over his heart. At a show a few nights prior and shortly after Cobain’s death, Vedder had this to say to the crowd before “Indifference”: “Sometimes people elevate you, whether you like it or not. It’s real easy to fall. I don’t think any of us would be here in this room tonight if it weren’t for Kurt Cobain.”

Midway through the Australian tour in support of Vitalogy, Dave Grohl surprisingly appeared for the last song of the night and guided the band through the track with his signature thunderous style.

Pearl Jam (minus Vedder) embarked on an 11-date European tour with Neil Young in support of their Mirror Ball collaboration. Only a handful of official Pearl Jam dates remained on the calendar before the band hunkered down and began writing their fourth record.

Amid confusion during the mid-’90s over what would become of Pearl Jam, the band’s performance of “Hail, Hail” on the Late Show in 1996 reminded fans that Pearl Jam is special and built upon resilience. Vedder delivered the outro of that performance with such intense passion. It was also a first glimpse of the new record, No Code.

“Breath” was performed at Madison Square Garden during the Yield tour for the first time in over four years. After three nights in a row where fans passed out “Breath” signs to hold up, the band obliged, opening their first encore with the popular Singles soundtrack tune. Vedder compared the sign request movement to organized religion as he humorously announced, “Well, f*ck you, we’re going to play it.”

Midway through the set during 2000’s US Binaural tour, Vedder noticed “something interesting happening on the side of the stage. If it’s happened before, we’ve never seen it.” A perfectly timed lead-in to a song about fortitude. Vedder graciously danced with Kim at the conclusion. A very special moment that ended up being featured in the Touring Band DVD. RIP Kim.

During their Las Vegas stop towards the end of the Binaural tour, Pearl Jam played the Mother Love Bone song “Crown of Thorns” for the first time to honor the late Andy Wood, their first decade as a band, and the 17-year relationship between Gossard and Ament.

During the 2000 Binaural tour, this was a beautiful guitar melody Vedder would usually play before ”Better Man”. Emotional and fitting for this heavy time period in the band’s history.

A surprise appearance by Chris Cornell during Pearl Jam’s last show of 2003. Cornell played two solo acoustic songs and then was joined by Pearl Jam for “Hunger Strike” and “Reach Down.” The first time Temple of the Dog songs were played by the complete band since 1992. A show that also included a guest appearance by Jack Johnson and Vedder sporting dyed blond hair.

“Love Boat Captain”, the opening song on opening night of the Vote for Change tour. After two warm-up shows in Boston, this was the first stop of a 10-day experiment that included Dave Matthews Band, Bruce Springsteen, John Fogerty, John Mellancamp, Dixie Chicks, and Jackson Browne. All would reconvene in Washington, D.C. for the finale. A purposeful, mood-setting choice for the lead-in to the activism-based tour, Vedder changed the lyrics to “let the vote begin” and got the crowd to sing the “love” chants in unison. The Vote for Change tour served as the centerpiece of Pearl Jam’s 2004 before heading back to the studio to craft their eighth studio album, Pearl Jam.

Vedder delivered an emotional story on VH1 Storytellers about what the song “Alive” initially meant to him and what it was about – not really knowing his true father and learning he had passed. A story he named “The Curse”. Upon seeing how crowds reacted to the song over the years and the spiritual essence behind it, Vedder explained how the song took on a new meaning for him. “The audience changed the meaning of these words. When they sing, ‘I’m still alive,’ it’s like they’re celebrating. And here’s the thing. When they changed the meaning of those words. They lifted the curse.”

After a six-month run, the Avocado tour ended in Hawaii. The native land of keyboardist “Boom” Gaspar. Without a true introduction, Vedder quietly led in with “Just a bit of a prayer here, OK. Just a bit of prayer.”

With an all-star lineup that included the Foo Fighters, The Flaming Lips, and Incubus, Pearl Jam took the stage right before the night’s honoree and stood alone performing “Love Reign O’er Me” and “The Real Me” It was one of those Varsity vs. JV moments.

Forty seconds of pure awesome. The lone time Pearl Jam covered this song and it was only a portion before launching into “Elderly Woman”. The crowd sang along. You long for it to keep going or to maybe hear it again someday. But that’s what makes it so unique.

The last song to close the historical Philadelphia Spectrum on Halloween night. The conclusion of a four-night Pearl Jam run at the venue, where 139 songs were played. A Rocky – Philadelphia icon montage was played before the band took the stage each night. Balloons and confetti dropped at the end of it all. It was thrilling time to be in Philadelphia as the Phillies were playing in the World Series right the across the parking lot. This would also wrap up Pearl Jam’s 2009 U.S. tour in support of Backspacer, which was released a month prior. “Yellow Ledbetter” has always had a finale, turn-the-page type of feel to it. This was one time where that’s literally what happened. (Philadelphia – 2009)

Night two of the PJ20 festival. The lineup consisted of many Pearl Jam friends and tour mates such as Queens of the Stone Age, The Strokes, Mudhoney, and Glen Hansard. This is the beginning of the grand finale, where Pearl Jam closed the weekend. They selected the B-side “Wash”, much to the delight of the fan club-heavy audience from all over the world. One of the more magical moments of a Pearl Jam show is when they first walk on stage. What will they open with? This moment captured it all perfectly.

Vedder performed with Roger Waters for the 12.12.12 Sandy relief concert. Another example of how powerful Vedder’s voice is. Among a night of stars, jaws dropped and goosebumps emerged as Vedder delivered the first … “There is no pain, you are receding.”

The crowd sang along … with the guitar parts. The band has admitted to being mesmerized by the enthusiasm and passion of South American crowds, often stating it’s one of their favorite places on the planet to play. The guitar riff sing-along for “Do the Evolution” has since become a staple, but this is where it all began. And this is how you do it.

After a two-hour rain and lightning delay at Wrigley Field, Vedder returned wearing a Cubs jersey and brought out Ernie Banks. This show was also an introduction to the band’s first new music in four years. With a new record appropriately titled Lightning Bolt, they played until 2 a.m.

Full band performance from the Global Citizens festival. Vedder had played solo renditions, but this was the first time it was performed as a full band. It was in the most appropriate setting, planted in the middle of Central Park on a beautiful New York City night. The song was introduced with respect to Lennon’s upcoming 70th birthday.