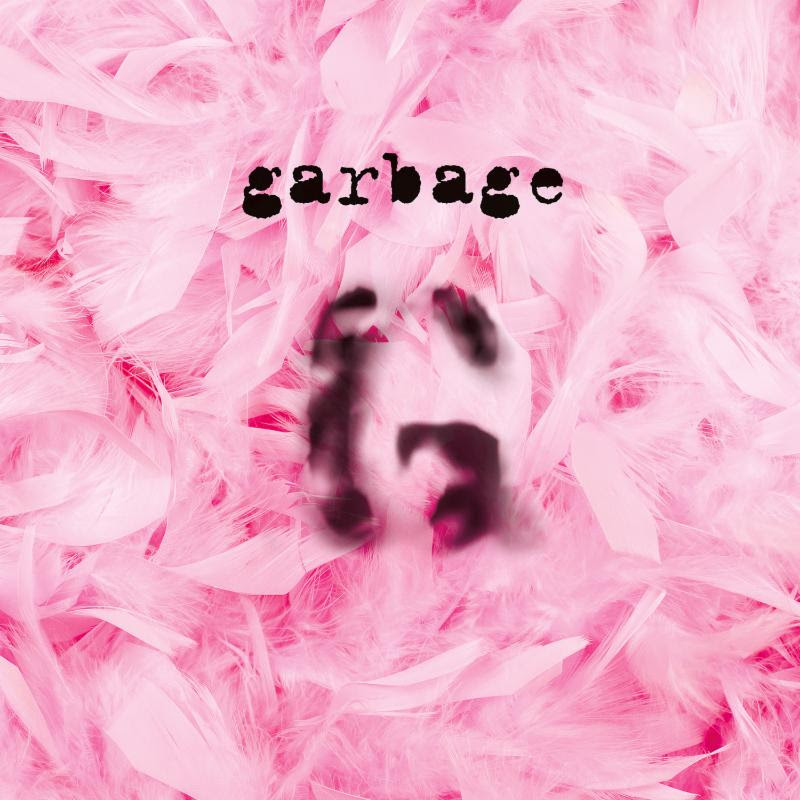 Garbage was never about subtlety. Their 1995 self-titled debut is a flashy introduction to the band, right down to the pink feathers and graffiti logo on the cover. At first, it all seems very ‘90s: an in-your-face group discontent with their lives and the world around them. But that’s only half right. Twenty years after the album’s release, the band’s complex legacy is still begging to be explored.

There are really two sides to Garbage on their debut: the alternative rock poster band and the trip-hop experimenters. Their image supports the former. With a name like Garbage, paired with Shirley Manson’s orange hair, the band exuded a punk ethos. Add in the fact that drummer Butch Vig was riding high after producing Nirvana’s Nevermind and Smashing Pumpkins’ Siamese Dream, still two of the highest-regarded rock albums of the era, and it’s hard to imagine the band being anything else. Yet Garbage only feels like this at certain moments.

“Only Happy When It Rains” is the epitome of post-grunge chart-toppers. The massive riffs and Manson’s smoky voice, painfully howling “Pour your misery down on me,” channel all the pent-up aggression that defined the first half of the ’90s. Likewise, “Stupid Girl” drops scene-appropriate bursts of noise between melodic bass lines to score Manson’s self-deprecation. This isn’t to devalue the band as a gimmick — in fact, the band was pushing the radio in brave new directions.

Another of the band’s singles, “Queer”, challenged expectations on multiple levels. First and foremost was the lyrical content: Manson’s, tongue-in-cheek, sexual lines had to have elicited some blushing in the Clinton era. But it also pushes past the grunge signifiers and into the other half of the band’s sound, specifically their interest in drum loops and samples. The opening ringing notes and shuffling drum patterns evoke European trip-hop rather than punk rock. Even with all the guitar back-and-forth, the production and arrangements remain lush and hypnotic. It’s a clear indication that Garbage aspired to be more Portishead than Pearl Jam.

Their ambitions are made even more clear on tracks like “A Stroke of Luck” and the haunting closer “Milk”, in which samples are placed front-and-center rather than hidden behind distortion. “My Lover’s Box” draws even more focus on the drum loops, before bursting into another massive chorus. Garbage bridged two very different worlds in an era that often felt separated, drawing different audiences together under their unique banner. Their self-titled debut feels just as instrumental for post-grunge as it does for dance rock and trip-hop.

Not everything about the band’s debut has aged particularly well. “As Heaven Is Wide” gets a bit heavy-handed with the angel imagery, though this does seem to be a common trope for the era (Sunny Day Real Estate, Pearl Jam). The assertive sexuality Manson brings to the lyrics remains fascinating and bold, but still, lines like “You can pull it out if you like it too much” on “Supervixen” have lost some of the shock value they had two decades ago. Even so, opening the record with that song highlights the band’s unwillingness to compromise and throws the listener right into Manson’s world.

This 20th anniversary edition also features several unreleased tracks and demos in which the more obscure half of Garbage really shines. The bellowing “Sleep”, which originally appeared as B-side to “Only Happy When It Rains”, delves into the band’s keen sense of rhythm and ability to establish mood. The slow, open track gives Manson room to show just how emotive her subtle swoops can be. Elsewhere, “Driving Lesson” and “Alien Sex Fiend” show the band operating at their weirdest, but not necessarily their most listenable. Industrial rock and surrealistic songwriting blend, but the outlandish lyrics and cheesy synth patches make it clear why they were left off the album back in 1995.

Garbage may not get their rightful place in history as the forbears of alt rock’s eventual embrace of dance music and samples, despite their unique blend of genres. However, their debut album remains a fascinating listen. Twenty years later, they’re still reigning as the queerest of the queer.