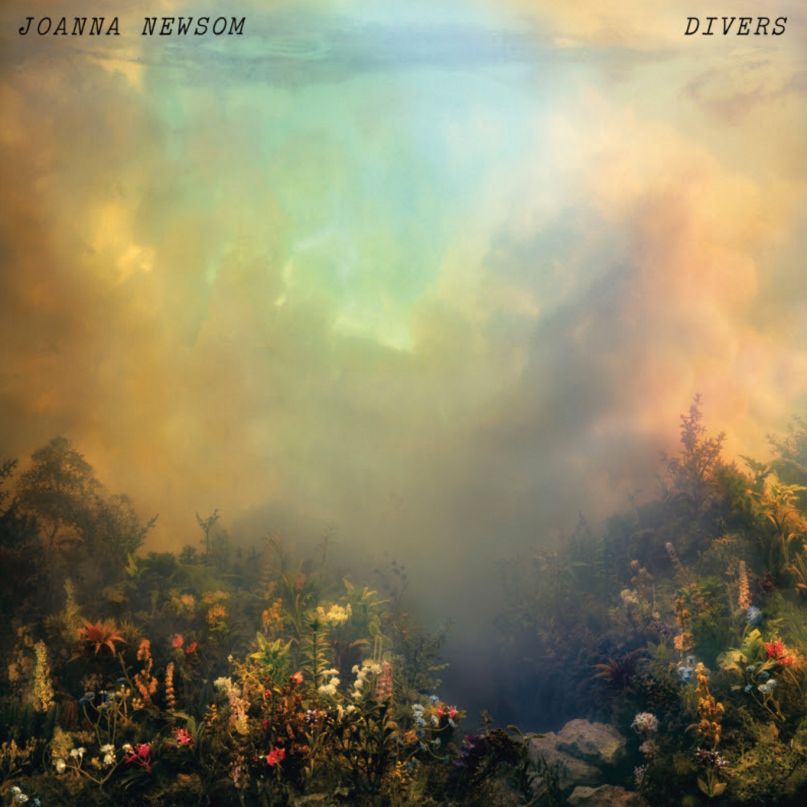 Until Divers, each of Joanna Newsom’s albums could be traced to a distinct point in her narrative. Her debut, The Milk-Eyed Mender, collected and repurposed earlier material from her self-released CD-Rs and introduced the public to a wild-singing, harp-plucking, melodically direct songwriter from the tiny town of Nevada City, California. On follow-up Ys, Newsom went an entirely new direction, choosing to meander over sprawling compositions, showing that she could maintain the type of focus over long-form songwriting that would make even the noodliest jam bands jealous. And then there was Have One on Me, a triple album that found a mix of both types of songwriting, all while grappling with the end of a relationship over the record’s duration.

Over these albums, fans have watched Newsom’s vocals grow more precise without losing their personality, the arrangements grow more lavish and expansive, and the list of collaborators grow long (Divers features Steve Albini, Noah Georgeson, Dave Longstreth, Nico Muhley, and Neal Morgan, to name a few). Maybe the most interesting thing about Newsom is how an artist whose mainstream appeal has always been limited by her music’s intellectualism can at the same time appear so relatable in interviews. Her genius has never served as an isolating factor.

On Divers, Newsom’s music is anything but regular. Working without the net of attaching the album to a distinct point in her narrative, Newsom attempts something uniquely ambitious: making an album outside a traditional career arc and still finding a way to make it a success.

Only one song on Divers extends into “long song” territory, and that’s the title track that appears near the middle of the album. Even though it approaches some of her past work in terms of the space it consumes, its melody isn’t convoluted and its lyrical metaphor isn’t indecipherable. She sings of the love of a person that spends most of their time underwater, exploring and looking for treasure. Newsom layers herself playing various instruments, but there is tremendous intimacy both in the lyrical content and the arrangement, causing all her sentiments to come into question when she confesses, “You don’t know my name, but I know yours.”

While full band arrangements turn up more often, complete with the previously rare employments of percussion on “Sapokanikan”, “Leaving the City”, and “Goose Eggs”, Divers more than any other Newsom album allows the spare and quiet moments to play off her more grand gestures. The penultimate number, “A Pin-Light Bent”, features only Newsom’s voice and a harp, wiping clean the slate by getting back to Newsom at her most skeletal. It’s also the most instantly familiar melody on the album, a moment that feels completely necessary for the listener to let their own guard down. But though she is singing at her most soothing soprano, Newsom still contemplates the very essence of her own life, its fleeting nature and the brightness with which it can shine. Though this can seem lighter than her previous work in certain respects, it is never without weight.

Divers also showcases Newsom’s knack for reaching out beyond the song and landing a line or phrase that can resonate on its own. On “Anecdotes”, a song that casts her voice dangerously and delightfully close to the realm of Disney princess, she exclaims an out of context bit that rings particularly true: “We sing to the garden, and we sing to the stars, and we sing in the meantime, wherever you are.” Often it can feel like Newsom’s audience is less the people around her and more the world that she occupies, but leaning on that interpretation feels like a cop-out for not wanting to travel into the depths of her narratives. Everything about the way she has morphed as a songwriter screams accessibility except for her lyrics, which still ask to be workshopped for full comprehension. There’s “Sapokanikan”, which could be mistaken for a Randy Newman melody, and “Same Old Man”, which employs a banjo for some front-porch blues. “Goose Eggs” even comes close to R&B in its melody, with Newsom offering knowing wisdom when another line leaps from the pages: “What’s redacted will repeat, and you cannot that you burn when you touch the heat, so we touch the heat.”

The album winds up feeling like the first in Newsom’s catalog that won’t be considered a classic, but it’s proof that a sturdy, thought-provoking, and rewarding record doesn’t necessarily need to stand next to her past work to find its own greatness. On the triumphant flex of power “Leaving the City”, the music drops away for Newsom to proclaim her faith in her audience. “I believe in you,” she sings. “Do you believe in me?” Over her career, Newsom has only garnered more people to trust in her journeys and her soft left turns into meditations on love, loss, time, life, and death. What makes her continually achieve greatness is the trust she puts back in her listeners, that they will appreciate her words and the labor she pours into her compositions, that they will give her music the patience it deserves.