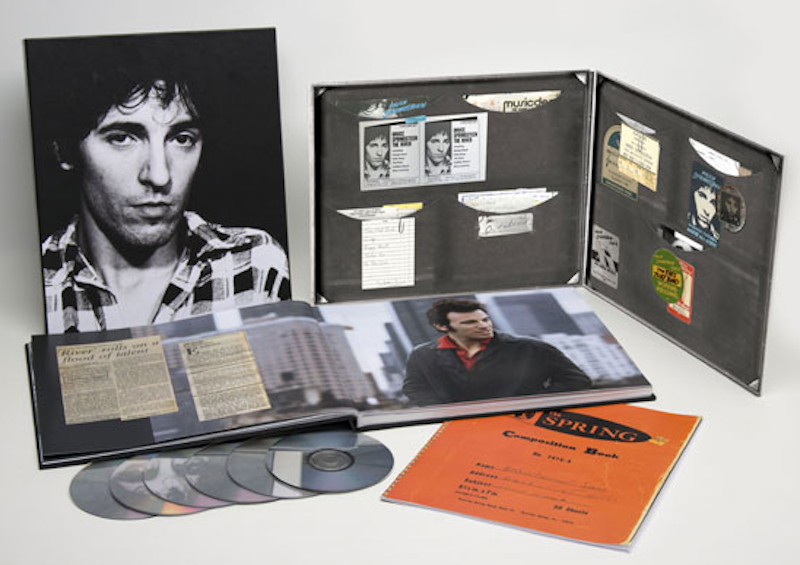 Bruce Springsteen has announced a massive reissue of his 1980 double-LP classic, The River. Due out December 4th, The Ties That Bind: The River Collection contains four CDs and three DVDs. Alongside the original two-disc album, the box set includes a single-CD version of The River that Springsteen initially intended to release in 1979, 11 rare and unreleased tracks from The River sessions, 10 previously released non-album cuts from the era, a documentary, and a concert film.

His first record to reach No. 1 on the Billboard 200 and the first to feature a Top Ten single (“Hungry Heart”), The River marked Springsteen’s fifth album. He initially turned in a single-album version under the name The Ties That Bind in 1979, but took it back when he realized he wasn’t done writing about the themes therein. He continued recording through 1980, producing more tracks than could fit on even a double album, many of which are contained on the box’s 22-track The River: Outtakes.

Some of those songs were released on the 1998 box set Tracks, including “Restless Nights”, “Where the Bands Are”, and “Ricky Wants a Man of Her Own”. Others, like “Meet Me in the City”, “Stray Bullets”, and “Party Lights”, have never been heard until now. As a preview of the newly revealed songs, Springsteen has shared “Meet Me in the City”, a jaunty nighttime swinger about a felon “charged with doin’ things I can’t explain” wooing the object of his affection. Check it out below.

Also featured in the box is an hour-long documentary directed and produced by Thom Zimny called The Ties That Bind. Alongside photos and concert footage from around The River‘s release, the doc shows Springsteen performing acoustic versions of the the album’s songs while discussing their backstories. In one scene that appears to be shot outside of his New Jersey home, Springsteen discusses “Independence Day”. “You’re brought into a very late night intimate convention between two people,” he says of the track. “It’s part of a series of songs that I wrote about my dad that weren’t completely autobiographical, but were emotionally autobiographical.”

The final piece of media in the box set is a two-DVD concert Springsteen and the E Street Band filmed in Tempe, Arizona on November 5th, 1980, the day after Ronald Reagan was elected president. Though apparently incomplete, the film features 160 minutes of footage, plus 20 minutes of rehearsal footage from September of that year prior to the album’s release.

In the documentary The Ties That Bind, Springsteen discusses the role The River played in his growth both personally and as an artist.

Also included is a 148-page book containing 200 rare photographs, an essay by Rolling Stone Contributing Editor Mikal Gilmore, the original RS review, reproduced pages from Springsteen’s notebooks, and other memorabilia from the era. Pre-orders are going on via iTunes and Amazon.

The Ties That Bind: The River Collection Tracklist:

DVD 1
The Ties That Bind (Documentary)