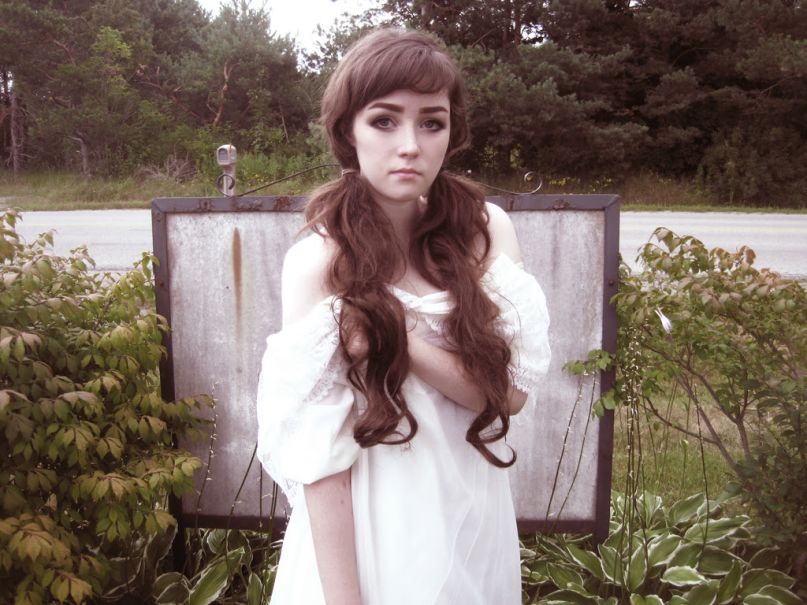 Nicole Dollanganger keeps her doll collection on one side of her bedroom and her gun collection on the other. It’s the same room she’s lived in since she was a baby, the one at her parents’ house in rural Ontario about 20 minutes outside of Toronto. Up until her studio debut, Natural Born Losers, it was also the room where she recorded all her music: a series of delicate, eerie pop songs about sex and love and kink and violence that she’s steadily uploaded to Bandcamp over the past three years.

Last spring, those songs caught the ears of James Brooks, formerly one half of Elite Gymnastics and boyfriend of Claire Boucher, who’s better known as Grimes. He passed them along to Boucher, and together they reached out to Dollanganger in March. She flew out to Los Angeles to meet them both in April; in August, Boucher announced that she had founded an artists’ co-op called Eerie solely so Natural Born Losers could be released on a broader scale. “It blew up my brain so hard that I literally started Eerie to fucking put it out because it’s a crime against humanity for this music not to be heard,” Boucher said in a statement.

Natural Born Losers already existed in demo form when Boucher got in touch, but with the new release plan in mind, Dollanganger had to bring her music from her bedroom into the studio for the first time since she started writing songs. “It was recorded in a few different basement studios with my friends,” she says when we talk over the phone. “Letting more people in was scary and sometimes hard, and it was also magical. I struggle with instruments, so they’re doing things that I never even thought possible. What they’re doing with guitars is so pretty.”

With its percussive flourishes and echoing production, Natural Born Losers sounds more tied to particular landscapes than anything Dollanganger has recorded on her own. Some songs explicitly reference places from her childhood; “White Trashing” is written from the perspective of a couple who shoot bottles off their porch for fun, while “Alligator Blood” takes its imagery from Dollanganger’s frequent trips to Florida. “I love alligators,” she tells me. In the song, she sings as someone who’s forced to drink the animal’s blood straight from its carcass so she’ll “grow up tough.”

Most of Dollanganger’s songs are laced with similarly startling descriptions of gore. Even “You’re So Cool”, which she calls a love song, turns its gaze to “the skulls of the high school champs you keep in rows above the bed.” “Flesh and the body … anything like that is universally relatable. I feel like it’s a really good way to get a concept across,” Dollanganger says. “Even if it sounds violent, it’s not necessarily. It’s this thing that everybody understands and anyone can relate to. We live in this culture that’s obsessed with death and obsessed with aging and our bodies declining. That’s just something that reaches out to me. It’s an easy way to describe something.”

Violence becomes vocabulary in a larger language of sorrow and desire and disgust. The most striking thing about Dollanganger’s music is the richness of her imagery, how her lyrics grasp at broad gestures through concrete physical acts whose mystery is never explained away. Hers is a world where things happen; she shows but rarely tells. She sings in a disarming soprano, her voice light and innocent as she describes rapists feeding their victims to wild animals, mothers setting their daughters on fire by the side of the road, herself killing an angel and mounting it on her wall. She regards the world’s atrocities and her own violent fantasies with melancholic fascination, singing lyrics that would make a metalhead spin in the timbre of a lullaby.

“It probably goes back to something as simple as watching a lot of horror movies, something you don’t even think impacts you,” she explains. “We all have that interest in the macabre. We’re all interested in death. Even people who wouldn’t necessarily bring it up in conversation have probably read about serial killers. There’s something about it that pulls them in. The way they’re portrayed … they almost become actual horror villains, like Fred Krueger. They’re these real monsters. It’s really fucked up, but you can buy a Jeffrey Dahmer action figure. That morbid curiosity, I think it’s part of the human condition.”

That marriage of the gruesome with the delicate comes naturally to Dollanganger; she gets it from her parents, she says. “My dad always makes jokes. ‘Half your room, you have these semiautomatic rifles, and the other half you have these baby dolls that you’ve been holding onto since you were five.’” The rifles used to be her father’s — she adopted them when he was cleaning out their basement and contemplated getting rid of them — while the doll collecting habit she shares with her mother. “I get the softer side from my mom,” she says. “I’m a sentimental person, so things that relate back to childhood and special times for me are very important.”

Some of the dolls lined up on her wall are toys she had as a kid, but others are rare antiques — carnival dolls made of chalk that she started collecting when she was 12. “They’re so rare now because they were made in the ’50s and given out as dinky carnival toys,” she says. “Because they’re made of chalk, because it was cheap, they are so rare to have survived such a long period of time. It’s so cool, because if you ever find one, you know that someone has taken immaculate care of it and loved it enough to have it still exist. They’re so delicate. I have a few dolls where you can actually see where the lipstick has worn off on the mouth because little girls used to kiss them so much. They’re just so sweet.”

As for the guns, Dollanganger says she’s never fired them, though she knows people in her hometown who keep weapons around just because “if something weird in the world happens, you want to know how to shoot a gun. There’s that weird, almost post-apocalyptic mentality behind it.” Her own gallery of rifles is just for show — a reminder of where she’s come from, a symbol of her harmonious relationship with her parents in the home they’ve always shared.

If her music has historically been pinned to a specific point on the map, it’s about to spread far outside Ontario. Dollanganger will accompany Grimes on part of the Rhinestone Cowgirls tour this fall for a string of the biggest shows she’s ever played. The 23-year-old songwriter might write songs like it’s the end of the world, but hers is only just starting to open up.