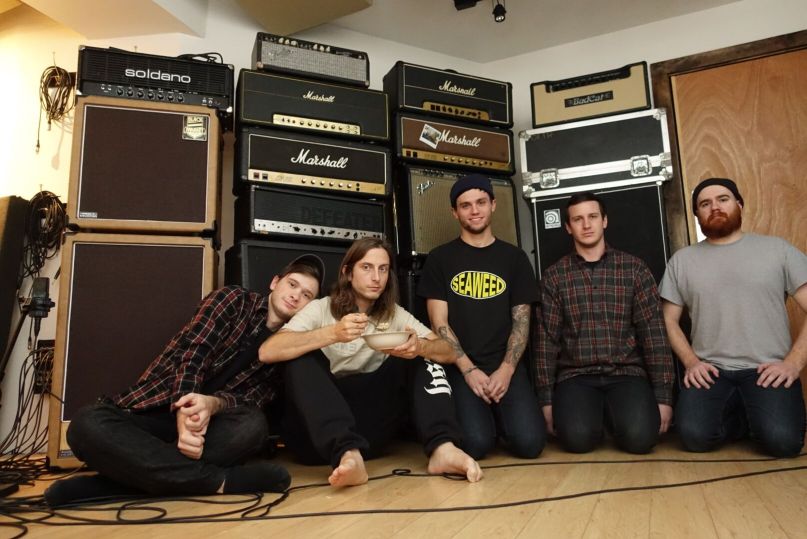 Albany, New York punk outfit Drug Church have been known to operate at extreme levels, in both a technical and personal sense. Fronted by Self Defense Family’s Patrick Kindlon, the band has carried the hardcore torch passed down through the likes of Fugazi and Black Flag, their 2012 self-titled debut EP earning them a reputation for self-loathing songs riddled with bombastic guitar licks and deafening drums.

This sound showed up in full force on their first full-length album, 2013’s well-received Paul Walker. Now, Drug Church is ready for round two with sophomore LP, Hit Your Head, due out on October 30th via No Sleep Records.

Though it’s been three years since their debut, Drug Church are still not quite done shining a harsh light on their flaws, as evidenced on new song “Hit Your Head, Greedy”. Here, they critique and own up to their bad party etiquette. Throughout the song, Kindlon details a less-than-savory guest, who gets high at weddings and wakes and is prone to drug-use and rage-filled episodes. A crunchy bass guides the song along while sharp guitar distortion flies in from every direction. Every second is brutal, making each act of debauchery feel worse and more hard-hitting than the last.

“While all Drug Church songs are, ultimately, about being an unlikable bag of garbage, this track really puts a fine point on it,” the frontman tells Consequence of Sound. “Stop making mom cry.”