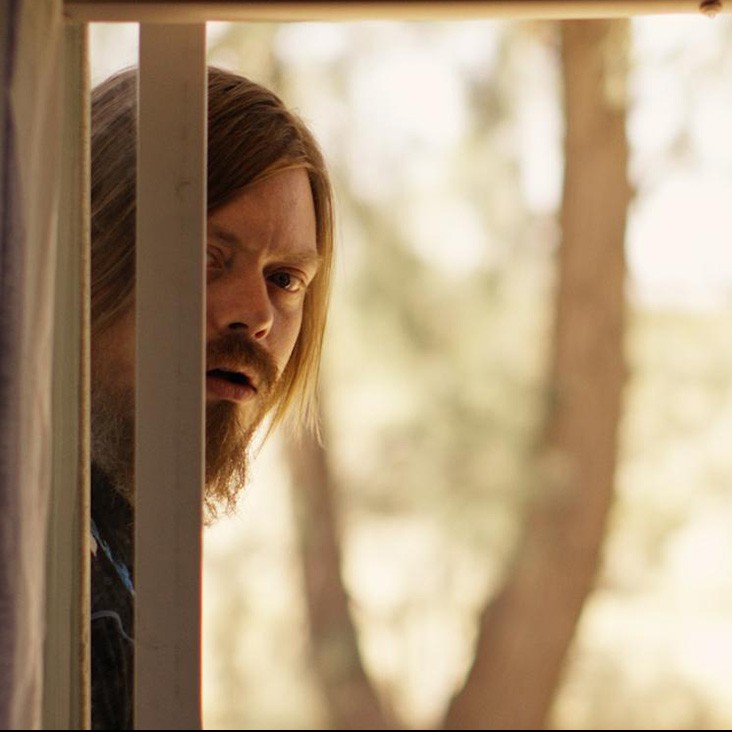 “I’m brand new!” Charles Manson declares in the archival footage that kicks off Manson Family Vacation. “Everything I do is brand new!” He dances, his arms flailing back and forth, his bearded mug a blend of joy and madness. It’s the perfect clip to kick off this smart, emotionally complex little film, since Manson Family Vacation isn’t about Manson so much as his legacy and the aspects of it that persevere to this day. Life isn’t a video game — when the big boss is defeated, his followers don’t revert back to their old selves, nor do his ideas wilt into the ether. Most modern audiences view Manson as a monster, but there’s a small contingent that still see him as human.

That’s where Conrad (Linas Phillips) comes in, bearded, backpacked, and clad in a bright yellow shirt emblazoned with Manson’s face. Newly unemployed and on his way to Death Valley, he stops in to visit his adopted brother Nick (Jay Duplass), a well-to-do lawyer with a big house, a beautiful wife, and an eight-year-old son. Quiet resentment simmers between the two, most of it centered on Conrad’s bohemian lifestyle and the recent death of their father. As a bonding exercise, Conrad takes Nick on a tour of the Manson murder houses. After that fails to resonate, Conrad lets Nick drive him out to his new life in Death Valley. Bonding ensues, truth emerges, and complications arise.

Manson Family Vacation isn’t a buddy comedy or a road movie, though it has aspects of both. It’s very funny, but unafraid of intense emotional catharsis. The script isn’t especially subtle — the third act’s reveal isn’t especially hard to figure out — but J. Davis’ direction is elegant, and Duplass and Phillips make for a winning duo. Though not as innately charismatic as his brother (filmmaker and The League star Mark Duplass), Duplass is every bit as natural, lending Nick a prickly exterior that’s nevertheless easily bypassed. Still, it’s Phillips who really stands out. The awkward, burly performer exudes humanity with a general countenance that’s both strikingly honest and deeply inappropriate.

That’s good, because Conrad needed an empathetic actor that was willing to investigate what exactly draws certain people to monstrous public figures and a fascination with tragedy. Phillips never plays Conrad as creepy or psychotic, even when Duplass’ Nick tries to project such behaviors on him. It’s an accurate representation of the way society treats people with unusual fascinations: It’s easier to judge than it is to actively engage. Search the Internet and you’ll find fan pages for every mass killer with a manifesto. Davis’ greatest accomplishment here is exploring such communities with an admirably light touch.

Ultimately, though, Manson Family Vacation is more about family than it is Manson. “It’s better than a real family,” Conrad says of the Manson clan, “because they chose each other.” It’s hard to argue with him, especially once you see how his strained relationship with Nick stacks up against the Manson sympathizers he befriends in Blackbird and Sunshine (Tobin Bell and Davie-Blue, both excellent). The aforementioned third act reveal complicates matters further, but the question persists: What constitutes family, and how do we reconcile our blood ties with our chosen clans? Manson had his answer. The rest of us might not.