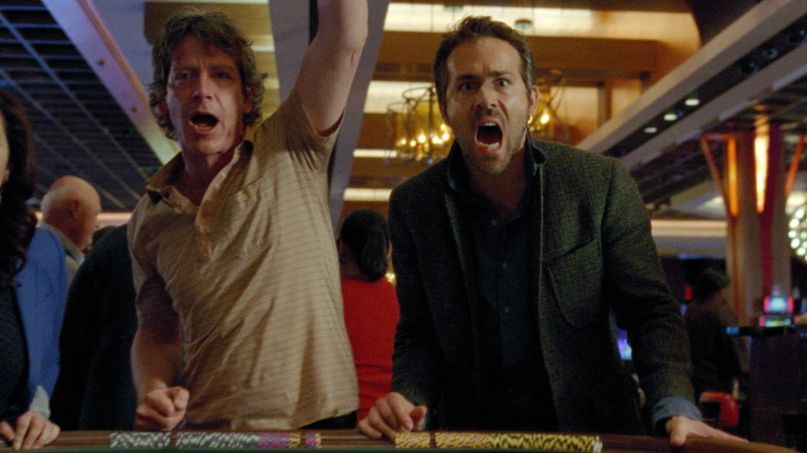 At first, Mississippi Grind might trick you into thinking it’s a raw gambling feature. An indie with two dudes out on the open road, photographed with Altman-esque naturalism as they struggle with their demons and push each other into mischief? The directors, Anna Boden and Ryan Fleck, are known for this kind of stuff and have a navel gazer’s penchant for society’s side characters, the under-appreciated and misunderstood. Gamblers? They’re outliers, and just plain liars.

But there’s something palatable about Mississippi Grind, a film about more than the grit or grift of gambling. It’s a buddy picture where the leads aren’t the best of buddies. As a matter of fact, Mississippi Grind is about two self-destructive types, unlikable but honest. Well, honest in how they’re depicted, at least; these two would fail a polygraph before they walked into a casino’s security office. Here’s a film about the need for companionship and support, not for the sake of filling some hole, but rather to keep out of trouble.

There’s Gerry (the ever-pitiful Ben Mendelsohn, going full Mendelsohn), a divorcee, a real estate agent on the skids, and a guy with debts to “everyone.” And there’s Curtis (Ryan Reynolds, trying so hard to be natural and nearly getting away with it), the motor-mouthed pretty boy (Reynolds!) gone down-and-out, whose background is a puzzle with a lot of missing pieces.

When the two cross paths at a run-down casino, Gerry mad-dogs Curtis, and Curtis can’t help but pay extra special attention to Gerry while mouthing off with the usual shoot-the-shit anecdotes. And it was love at first Woodford Reserve. At least, they order that and get the cheap stuff. But it’s a meet … desperate?

The two keep running into each other. Good luck? Gerry seems to think that’s what Curtis is. Gerry, in a bid of desperation, wants to hit the road with Curtis and gamble their woes away. Gerry is certain Curtis’ very presence will bring good fortunes. Curtis, a hound dog with a little bit of dough, agrees. And they’re off, from Iowa to Mississippi, riding a Subaru. They gamble in a river raft; they hit up OTB. Gerry sneaks his way into small games while desperately avoiding money lenders and bookies from back home. Curtis seems to have ties to women, but it’s never fully fleshed out — he’s a wild man, born free to bed ladies.

This being an American indie, we’re privy to some of the finest natural-lit establishing shots and dank locales imaginable. Mississippi Grind is a filmed series of lies, bad choices, and shaky attempts to get paid, all told through the texture, the soundtrack choices, and interesting casting.

On that soundtrack note, this movie has a radical one, available as two albums: Gerry’s Road Mix, and Curtis’ Road Mix. Cute. But the film bubbles and bursts with blues, rock, and soul from the likes of cats like John Lee Hooker, Memphis Minnie, Memphis Slim, Big Bill Broonzy, Paul ‘Wine’ Jones, and more. It’s a good’un.

The two leads work hard. Mendelsohn is beyond perfect as Gerry, all beige and gray and broken down enough to look like a guy who’s spent a lot of time running from debt. It’s a nuanced, deep, and terrifically sad performance; Mendelsohn is certainly unlikable, but crazy watchable. Meanwhile Reynolds, while mired in mixed motivation and the phoniness of someone who tries to talk his way out of everything, is at least all-in on Curtis. He’s a character comprised of tells, little distractions for the audience to realize there might be little inside him. But he’s not a dullard, and that allows for Reynolds’ most committed work to date.

Mississippi Grind’s structure has admittedly little to say beyond its tired clichés about luck and friendship. The two men drive, they rant, they lie, and they cling to a rapidly deteriorating dream of amassing riches without really trying. But Fleck and Boden bet big on the characterization, ambience, and anti-glitz of the whole thing. Mendelsohn and Reynolds aren’t Clooney and Pitt, and that’s Mississippi Grind’s best hand. The gambling is tertiary when we get wrapped up with these two cards.