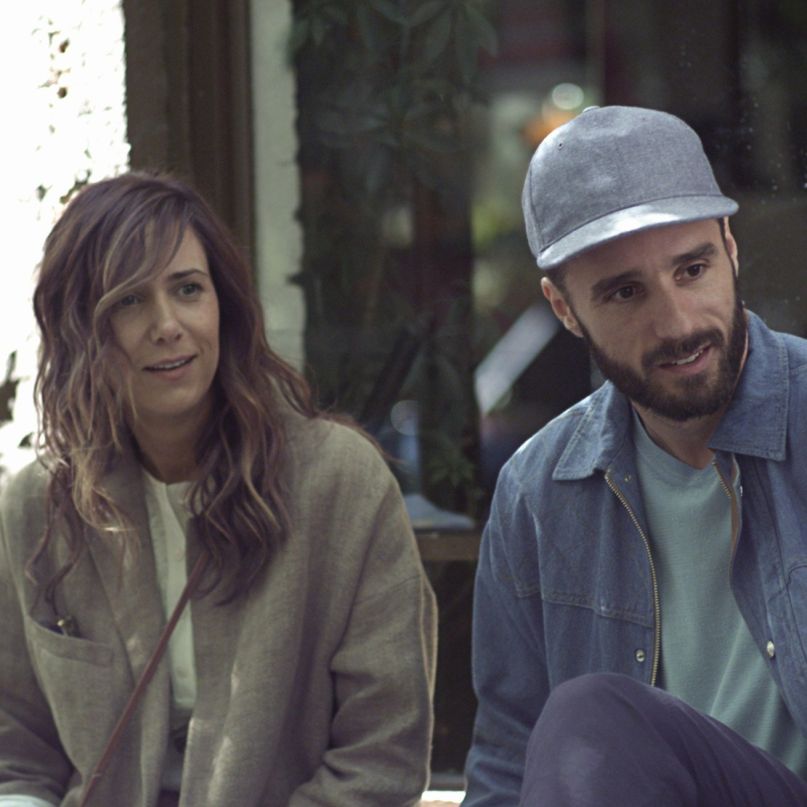 Nasty Baby is one idiosyncratic film for much of its runtime, and a different but equally puzzling one in its final act. And if writer-director Sebastián Silva never really synthesizes those disparate parts, it’s a minor qualm against a film that’s at points moving in its deeply weird, deliberately stilted way, and at others as abrasive a bit of unshowy satire as theaters have seen this year. It’s difficult cinema, absolutely so, but like the most interesting of the difficult movies, it’s an eminently memorable watch.

Among many other things, Nasty Baby is about a trio of progressive-minded Brooklyn friends who set out to have a child together, for reasons that range from sincere excitement to what appears to be some sort of performance art gesture. Freddy (Silva) and his boyfriend Mo (Tunde Adebimpe) amble through their days, Mo working at a fabricator’s workshop while Freddy prepares his latest show: Nasty Baby. Because of what Freddy describes as his feelings of remorse over becoming yet another parent fawning over yet another baby, his penance is an art showcase in which Freddy will perform as a newborn infant, crying hideously and humiliating himself.

He’s also jerking around the surrogate, his best friend Polly (Kristen Wiig), who’s along for the ride for some of the same reasons but also has reached the end of her rope trying to tell Freddy that she’s running out of time and really wants to do this. And while they negotiate the rituals of New York life, from dealing with obnoxious studio curators to the Bishop (Reg E. Cathey), a mentally ill man living on their block who doesn’t know how to leave the gay couple alone, Freddy and Mo and Polly attempt to prepare themselves to be ready, and maybe even excited, to receive a child into their world.

This description still falls short of describing the singularly odd rhythms on which Nasty Baby shambles along, but Silva and his cast find a consistent (if physically uncomfortable) tone that the film maintains even as it becomes more and more beholden to the film’s larger ideas about parental anxiety and secrets left buried. These ideas emerge in small ways: Freddy’s obsession with superimposing his face onto infants to try and fathom what his child would look like, a snide remark from Mo’s relatives about a triangular family dynamic, or when one of them lets off a side remark about their own self-absorption, even as they revel in it. The fact that Freddy can’t even deal in any kind of productive way with the man who brings out a leaf blower too early every morning suggests that they have quite a bit of work to do.

Silva frames these vignettes with an uncomfortable intimacy, both visual (the film is heavy on close-up takes that cut the film’s purposeful aimlessness with a tension that ends up proving totally appropriate) and emotional. Which is why the film’s controversial finale (one that has seen audience walkouts at Sundance and elsewhere) ends up tying together the film in a way that’s initially dissatisfying but ends up proving a cathartic moment of absolute unity. In more ways than the obvious, Nasty Baby asks a trio of “creatives” in arrested development to grow up faster than they’re probably ready to handle, and throws the world at their feet as it forces them out of their cloister. And while Silva’s particular rites of passage are far from the usual trials of soon-to-be parents, the circumstances that force them along are too familiar. Struggle waits for nobody and operates on no timeline. You just keep getting up the next day and hoping for the best.