How Daniel Lanois Brought U2 Back Home

The band's longtime producer revisits All That You Can't Leave Behind 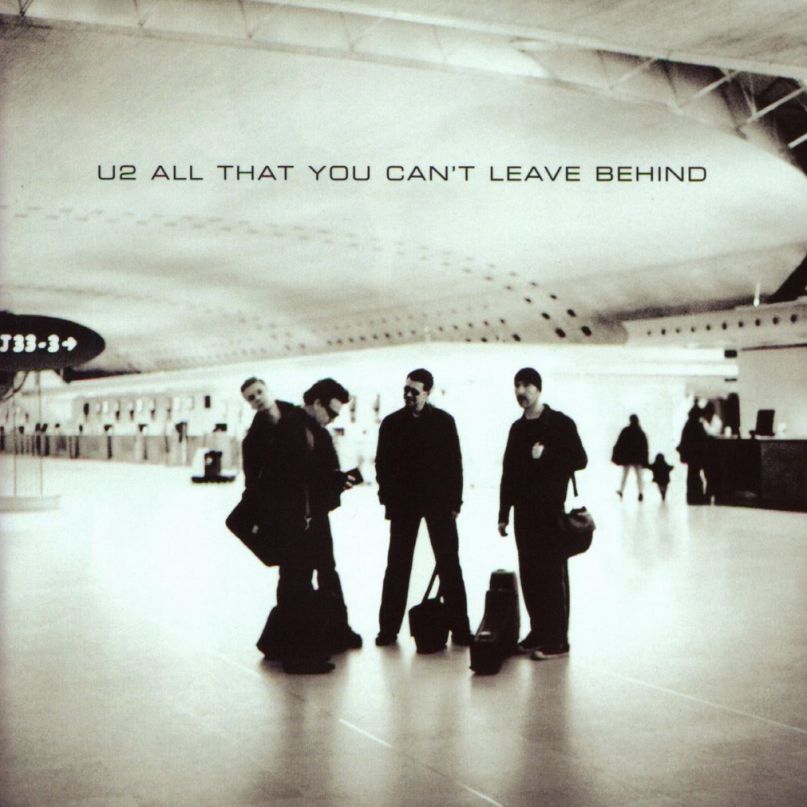 You can always go home again.

How many times have we heard that? It’s reassuring to know that regardless of where our travels take us, there is always the comfort of home to fall back on. But while having that safety net is nice, there’s also a hint of regression in circling back to one’s roots. More often than not, it takes a wrong turn, however slight, to steer us back where we came from.

As U2 found near the turn of the century, rock ‘n’ roll demigods are not exempt from such life lessons. After a decade-long winning streak that boasted such monolithic hits as The Unforgettable Fire, The Joshua Tree, and Achtung Baby, U2’s once-indelible luster began to fade a bit. Zooropa, released in 1993, was the band’s attempt at riding the alternative rock wave that had crashed upon the shores of mainstream rock radio. It was hardly a flop, but it also didn’t scale anywhere near the heights of their previous smashes, commercially or critically. Then five years later came Pop, a curious flirtation with dance music that only the most chiseled of U2 diehards can endorse. If Zooroopa failed only by the band’s own lofty standards, Pop was met as U2’s first and only flat-out misfire.

When U2 regrouped in 1999 to pen a follow-up to Pop, they went back to their native Dublin. With their hunger for experimentation largely satisfied, the band opted to get back to the heart of what they do best: big, anthemic rock ‘n’ roll. To get there, Bono and company re-enlisted the services of Daniel Lanois and Brian Eno, the legendary studio pair responsible for bottling up the band’s most electric moments on record. As we get ready to celebrate the 15th anniversary of All That You Can’t Leave Behind, we spoke with Lanois about the value of preparation, how his relationship with U2 works, and what he remembers about the record that re-established U2 as arguably the biggest rock band in the world.

What do you remember most about the record 15 years later?

Well, we made it in Dublin, I remember. At that point, U2 had a studio right on the canal system, literally three feet from the water’s edge. It was in this industrial park. Back then, it was pretty funky, but it’s since evolved into a walking area. That’s where we were.

In retrospect, there’s something kind of poetic about recording in Dublin, especially given the record’s reputation as a “back to basics” or return to form for the band. How conscious of a decision was it to bring the band back home?

I think at that point it made sense, geographically and otherwise. At that point, U2 had made Achtung Baby, if I have my history right. That was all about making a European rock ‘n’ roll record in Berlin. Then, after flirting with American music [on Zooropa and Pop], they were happy enough to be Dubliners again. We were not necessarily looking for any outside forces other than the people in the room. Do you have the titles there? Is “Beautiful Day” on that record?

Yeah. We recorded that track in the studio I described to you. I have fond memories of a very nice setup. That’s a big part of the success of U2 recording sessions. They have a band room, which is like the blast furnace. You’ve got to wear a protective suit to go in the room because it’s so loud. Then we have the room of communication. They had a very big control room at that time. That’s where me and Eno set up, and we gave a lot of time to our stations. We weren’t just cerebral contributors to U2; we were actively in the trenches with them.

I can imagine. At that point, that was the fourth record you guys had done with them. Do you feel like extended family, at least with respect to the recording process?

Oh, absolutely. It was clear to everybody that we weren’t just technicians. We have musical skills, so our stations were very welcome. In fact, “Beautiful Day” was one of those tracks that we batted around for a few days. One morning, Eno and I arrived a little early. We drummed up this sort of germanic beatbox beat, sort of like [mimics song’s opening drum part].

Yeah, man, there you go. That’s something the band has come to expect from Eno and myself, that we’ll present them with different angles and ways of looking at their work. “Beautiful Day” was a nice example of that. We let [drummer] Larry [Mullen Jr.] off the hook. He didn’t have to do that rock ‘n’ roll signature of his, that heavy drumming on top. By asking him to do a different task, the song took a different direction. It was a turning point for the song. The idea for the song came from the man himself, Bono. It was in the middle of a long session, and at the end of it, he just said, “It’s a beautiful day. Don’t let it get away.” We took a lunch break, and when we got back we thought, “Well, that might be the chorus.”

You just know it when you hear it.

One quote from Bono that always gets attributed to the record is, “We’re reapplying for the job of best band in the world.” That sounds like a lot of pressure they were putting on themselves. What was their mindset coming into the studio?

I don’t remember there being that much of an agenda. They were wiling to huddle up, and history has shown when we huddle up, we do good work. We wanted that feeling again. We didn’t want to do any globetrotting. We were happy to be in Dublin. The winning team was back together, so there was a feeling of “Let’s make the most of this.” People didn’t want to travel as much at that point. As a touring band, they were happy to be home. I was happy to leave my Canadian home to be there with my Irish mates.

The recording process was lengthy, right? Something on the order of two years?

It always sounds long when you look at it from the beginning to the end, but in fact we weren’t at it all the time. At that point, everyone had families. You had to think about kids. We tried a different technique of hit and run. We just rolled up our sleeves for 10 days and got out of town for another month. We took advantage of the fact that we get a lot done quickly. That pace accommodated the making of the record as well as everyone’s family life.

Didn’t you and Bono work on another project together at the same time? Did that in any way put strain on the process, breaking things up bit by bit?

That’s right. We did a soundtrack together, but that didn’t take a lot of time. We put a band together, Bono and I, and it was very sweet of U2 to accommodate us for that. But I can’t remember there being many interruptions beyond that. We like creativity. I remember we cowrote a song for the soundtrack called “Falling at Your Feet”. Edge said, “You gave away those lyrics? What about our record?” It was a nice set of lyrics [laughs].

Are there songs from the record that stand out for you all these years later?

I get surprised by some of that stuff occasionally, if I’m leaving a store or hear it at someone’s house. You’ll have to refresh my memory about some of the song titles from the record we’re speaking of, but obviously “Beautiful Day” resonates with me. Can you rattle off a few more titles?

“Stuck in a Moment You Can’t Get Out Of”?

That was an interesting one. It was based off an old R&B groove. It had this Marvin Gaye sort of feel to it. There were these classic chord changes that we hadn’t experimented with up to that point. I think it meant a lot to Bono, because it’s about a tipping point. Maybe one night you’re dealing with insecurities and something can take you too far, whether it’s depression or isolation or what have you. And in those moments maybe you just need a friend to say, “Come on, let’s go do something different.” It can save a person’s life. As I remember, it was written for the INXS singer who died.

Yeah, yeah. But it’s really for anyone who’s stuck in one of those moments.

The gravity of that song is huge, but musically it feels so light. It’s a great contrast.

Well, it’s a reminder of what we all love about art. It’s a contradiction in tonality. I like that in photographs, where they can be a little shadowy. It can be cheerful subject matter, but there’s some sort of menace there far off in the corner.

It just seems like whenever you and Eno get together with U2, great things happen. You seem to have some sort of touch or ability to unlock their best stuff. What do you attribute that to? How does it work?

We’re really dedicated to coming out with results. We put a lot of time into preparation, Eno and myself. I have my own sandbox and tools that I work with, and Eno has his. We might spend five days building our stations, our sounds, and this and that, so that in the heat of the moment with these guys, we can be musical contributors. We just play well together, simply put. When we start jamming we have a lot of fun, and something always comes out of it. Perhaps not a finished song, but maybe the root or vibe of something we can build on. We call that spotting. We might just charge into some jam or some idea that someone’s excited about, and off we go. After a few hours of work, if I’ve done my job as a note-keeper, I’ll tell the assistant engineer about some of the parts we need to get back to. Some of those parts weren’t originally built into the aesthetic of the record, but one of the great parts of our work is that we can change the course of the ship in any moment. If we find something that we’re excited about, we can go off and work on that for a while.

Yeah, man. We play well together, we have good jam sessions, and we’re good at making an assessment of moments of freedom. If we’re lucky enough to find one sort of sparkling resource, a crack of light from the door, then we’re on to something.