The Queen of Pop reigned supreme over the City of Angels 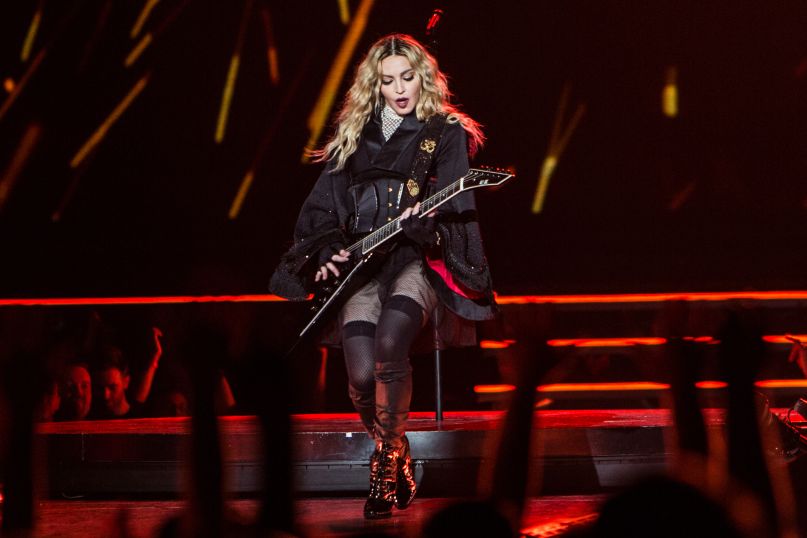 “It’s decent work, if you can get it,” Madonna told a capacity crowd at The Forum in Los Angeles on Tuesday night. The pop music legend was surrounded by her dance crew; a group always there to lift her up, to help her down stairs, to fetch her water when she is thirsty. But this little quip could have applied both to herself and her infinitely impressive troupe, as a recurring theme through her two-hour set was humility. She would joke about the ceiling seeming lower because of her inflated ego, but the reality is that even after 32 years of reigning as the Queen of Pop, she remains grateful of her life and profession.

Madonna’s gratitude should have been difficult to muster given the turmoil she endured for the release of this year’s Rebel Heart. This included two separate leaks of both demos and finished tracks off the album, all stemming from a hack on her personal computer that ended with a 14-month sentence in an Israeli prison for the culprit. Because of the hacker’s actions, however, her entire release plans were stripped away all at once, and the art that she worked so hard to create was brought into the world without any of the deserved control.

But the Rebel Heart tour wasn’t about that unfortunate period and left the album’s dark cloud in the past. Instead, taking a cue from the night’s big finish “Holiday”, the performance was pure celebration, with the opening images featuring a caged Madonna breaking free of the bars that hold her in order to entertain the crowd. And in a clever use of her audience’s early undivided attention, the first handful of songs were almost exclusively from her recent release, allowing her to showcase her newest material while her fans were caught up in the giant spectacle.

And much of the show was larger than life. From the interludes that showcased Rebel Heart tracks while her dancers put on acrobatic displays, to stage features that would ascend and recede as the concert demanded, the production did not skimp, right down to the cross-shaped stage extension.

But it was the evening’s moments of intimacy that really shined. Early on it was a ukulele sing-along of “True Blue”, which under the circumstances became even sweeter and more playful than the giddy original recording. Later, she would reveal it was her daughter that got her playing the uke as she sang one of her child’s favorite covers, “La vie en rose”. And an acoustic run through “Secret” found fans singing along to one of Madonna’s less heralded singles, with the pop star finishing at the end of catwalk, voicing her love for that part of the show because it wasn’t reliant on specific timing and she could go off script.

And then she did just that, offering up something special for “the City of Angels,” an unrefined and joyous rendition of “Like a Prayer” performed for the first time on the tour. There wasn’t a dance routine to support the song, just Madonna getting the audience caught up on the strength of the classic. Sure, the presentation of a pop experience is what people expect when they come to these sorts of performances, but Madonna’s music is so much more than that. Her songs are cultural touchstones, distinct musical memories, and can often completely stand on their own without the frills of lights, dancers, and choreography.

During a medley that saw “Into the Groove” and “Lucky Star” bisecting the beginning and end of “Dress You Up”, fans erupted at the first hints of the Madonna classics, thankful that she still found ways to include songs within songs, giving the audience more than a typical setlist could offer. If felt like a generous nod from an artist that no longer needs to be generous. But that comes back to the prevailing tone of the show, how it felt more like a humble thank you note than a album-slanging promotional event. With fans like Katy Perry (brought on stage for a spanking during “Unapologetic Bitch”), Beyonce, and Jay Z all in attendance, the Rebel Heart tour could serve as a model of how their career can look in 20 years if they play their cards right. It’s decent work, if you can get it.