A night of delirious amounts of spooks, specters, and jump scares

by Blake Goble and Dominick Suzanne-Mayer 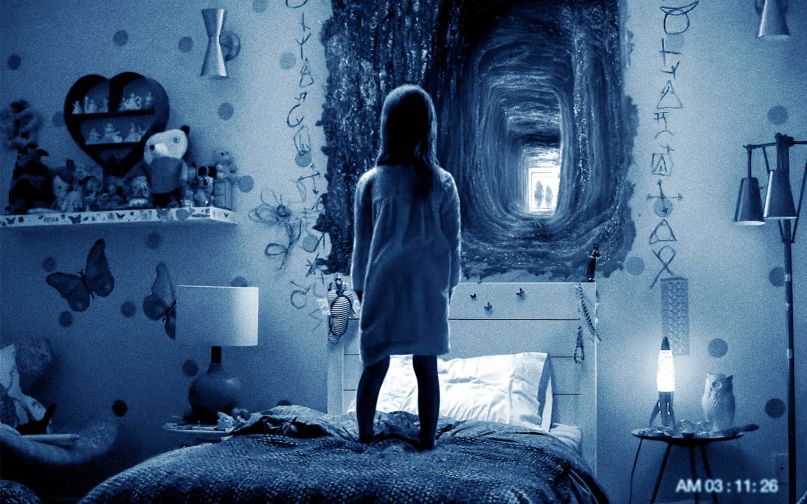 Marathon is a recurring feature in which our writers endure a grueling face-off with a franchise or collection of work in a single sitting and report back on the experience. In our latest edition, Blake Goble and Dominick Suzanne-Mayer sat down for delirious amounts of spooks, spectres, and jump scares courtesy of the Paranormal Activity franchise.

What the hell were we thinking?

Dom and Blake got together one night to watch all the Paranormal Activity films in anticipation of Paramount’s upcoming Paranormal Activity: The Search for a Solid Release Date (aka The Ghost Dimension). It’s easy to forget the film’s humble origins, Halloween hype, and eventual wearing out of its welcome to theaters, even if that all happened over the past six years. The post-Blair Witch haunted house thrillers played with clever camera work and eventual universe-building, looking for any reason for doofuses to keep recording in the face of a malevolent presence. Through security cams, GoPros, laptop cameras, and Betamax, ghosts got caught on candid camera.

In re-watching the franchise (among other things…), Dom and Blake got to witness the steady dip in franchise quality and learned to deaden themselves to jump scares after many hours of loud noises and things abruptly popping into frame. But still, nothing beats a scrappy film school-like project taking in hundreds of millions of dollars from humble beginnings and a $15,000 budget. Sometimes, Steven Spielberg hyping your movie can do wonders.

So get ready for Blake and Dom’s long journey into a Friday night. And see if you can guess who wrote which notes. Hot tip: Blake is panicky with this genre. Dominick? Less so.