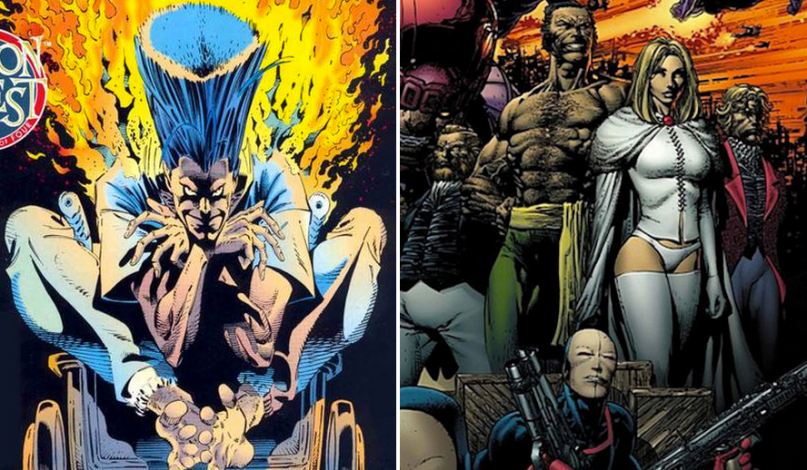 It’s hard to imagine Marvel ever getting the X-Men feature film rights back from FOX, but that doesn’t mean they’re out of the X game entirely. The two companies have just announced a pair of television shows set in the X-Men universe.

The first will be called Legion and has been ordered to pilot by FX Networks. The story will center on David Haller, a diagnosed schizophrenic who has found himself in and out of psychiatric hospitals since he was a teenager. After a strange encounter with a patient at one of these institutions, Haller realizes the voices in his head and the visions he sees might actually be real.

In the comics, Haller is Professor Charles Xavier’s son, an omega-level mutant who merges his split personalities into a being of immense power, inadvertently launching the Age of Apocalypse. The character was a regular in X-Factor comics, and more recently headlined the X-Men: Legacy series.

Fargo and Bones’ Noah Hawley has been hired to pen the pilot as well as executive produce alongside X-Men: Days of Future Past’s Lauren Shuler Donner, Bryan Singer, and Simon Kinberg for FOX, and Jeph Loeb and Jim Chory (both from Marvel’s Angets of S.H.I.E.L.D., Daredevil) for Marvel Television, as well as John Cameron (Fargo, The Big Lebowski). FX Productions and Marvel Television will produce, while FXP will manage the actual physical production.

Co-President of Original Programming, FX Networks and FX Productions Nick Grad said, “Legion is just the sort of ambitious story that Noah excels at. His adaption of ‘Fargo’ for television was one of the most acclaimed television events in recent memory. It’s also an honor to partner with Marvel on Legion and to enlist such an accomplished team of Executive Producers to create this pilot.”

(Read: Does Continuity Matter? Time Travel and the Multiverse in X-Men and DC’s Extended Universe)

Meanwhile, over on FOX, a series entitled Hellfire is in the works. Set in the late 1960s, this series appears to be a more direct spinoff of the X-Men films, specifically X-Men: First Class. In the show, a young Special Agent stumbles upon a mutant woman with high ambitions of power who seeks to take over the world as a member of a clandestine group of millionaires known as The Hellfire Club.

Film fans are familiar with the group, as they were the primary antagonists of First Class, led by Sebastian Shaw (Kevin Bacon) and featuring Emma Frost (January Jones), Azazel (Jason Flemyng), Riptide (Álex González), and eventually Angel Salvadore (Zoë Kravitz). Though Magneto mentions Frost died between First Class and Days of Future Past, the timing of Hellfire still could allow for her to be the “powerful woman” character, as she is a major player in the Hellfire Club of the comics.

20th Century Fox Television and Marvel Television will co-produce, with Fox once again handling physical production. The series is co-created by Evan Katz (24: Live Another Day), Manny Coto (24), and Patrick McKay and JD Payne (Star Trek Beyond). McKay and Payne will pen the pilot, act as show-runners, and co-produce. Donner, Singer, Kinberg, Loeb, and Chory will once more serve as co-producers.

David Madden, President, Entertainment, for Fox Broadcasting Company, said, “We are thrilled to partner with Marvel to bring this world to television and build upon the vibrant mythology that has captivated fans for years. These powerful and dynamic characters are complicated and larger-than-life, the pace and visual imagination are unrelenting, and the story takes place during one of the most explosive eras in recent history.”

Jonathan Davis, President, Creative Affairs, at 20th Century Fox Television added, “Hellfire is a unique opportunity to be able to go deeper with some of these extraordinary characters, but to also dramatize new characters and give TV viewers a chance to experience this expanded world in an explosive way that everyone will be talking about.”

Though it isn’t directly stated, the “go deeper” and “build upon the vibrant mythology” lines imply that at least Hellfire is indeed set in the same universe as the X-Men film franchise. The teams involved with both projects, having come from the X universe already, also adds credence to the shows’ big screen connections. Though Marvel Entertainment has worked on all the X-films to date, Hellfire and Legion will mark the first time an in-house Marvel production division (Marvel Television, in this case) has been involved in the X-franchise.