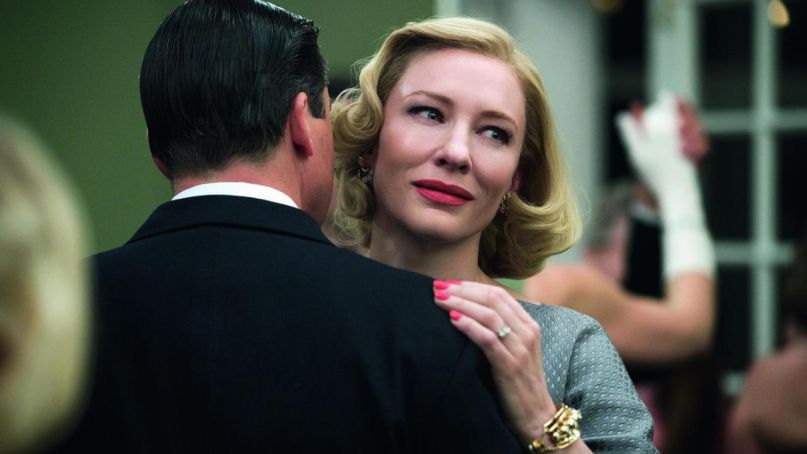 Todd Haynes’ Carol captures the intimacy and tension of love in a time when, for some, love interferes with the rest of life’s balance. Then again, when does it not? Yet Carol pushes even further, asking why we love who we do and what we hope to get out of the relationship — all through the eyes of a heartfelt, taught, reticent connection yearning to become a relationship as outside forces tug it backwards. Ownership has no place in love. The only exception is the possession one has over their own heart and the tightness of their grip on its emotions. As Haynes’ film unfolds over the course of two hours, we’re reminded how crucial simple affection is, especially when faced with repression in a world that’s pushing you in.

Based on Patricia Highsmith’s 1952 novel The Price of Salt, Carol pries into the love affair between the older married woman Carol (Cate Blanchett) and the youthful department store worker Therese (Rooney Mara). Neither is a stranger to affection. Carol battles the ongoing struggles of a separation from husband Harge (Kyle Chandler), and Therese can’t find a reason to commit to her relationship with the young, affable Richard (Jake Lacy). Both women clearly stand taller than their male companions. Carol, wrapped in a huge fur coat with all-knowing power, holds her head high despite the somber battles in her life. Therese, wide-eyed and unaware of her own virginal beauty, finds herself drawn to her passions as a photographer.

So fate, as it always seems to go, sees the two meet at Therese’s doll section in the Manhattan department store where Carol accidentally-on-purpose forgets her gloves on the counter. The rush of Christmas acts as a blur behind them, both in their introduction scene and the rest of the film, bringing warmth to snow and silence to shopaholic bustling.

The remarkably personal and poised piece capitalizes on its subdued emotions by amping up the imagery of the time period. The 1950s already detail themselves sensuous by nature of attire, especially when you’re dealing with side-by-side images of the upper and middle classes as represented by the two women. Director of photography Edward Lachman highlights it all while Carter Burwell’s swelling score gives those images voices. It’s a time period of sleek cars, dapper hats, soft curls, and button-down coats, this time magnified with foggy restaurant windows, vintage train sets, silvery Minolta cameras, and category cards for real record stores. Blanchett’s home is sewn with modern mahogany furniture, while Mara must light a match simply to heat her apartment’s oven. The differences aren’t dramatic enough to set the two worlds apart, but they act as launching points for natural intrigue, two outsiders interested in the details of one another’s backstories.

Carol’s plot works well because of the way in which it’s delivered. Here lays a lesbian romance that, finally, does away with sensationalism. The usual error is that of overdramatics; the physical is milked extravagantly. Here it’s done tenderly, and sparingly, opting for shy shots of hands on shoulders or fingers brushing on piano keys instead of a head-on embrace, as if to give the characters both privacy and allure. There’s a level of maturity expected of the audience, and with that expectation comes top-tier acting to illustrate that romantic scenes expected of a film don’t need to flash skin. Attraction permeates flesh through the smallest of gestures. Those who come wanting and hungry to discuss exposed lesbianism will still be satisfied, without the usual clichéd representations.

In a New York Times interview on the stubborn sexism of Hollywood, Blanchett addressed the influence actresses have in changing the way sex sells: “When the director says you really need to be topless in this scene, I go, ‘Do I?’ You have to fight back and claim the right to develop the character … even a character that’s written in a clichéd way.” Carol backs her statements up. As the industry knows, there’s no question over whether or not sex sells, but there can be questions over the way in which we sell it.

Carol dons red lipstick in nearly every scene, but even that classic symbol of seduction is reeled in; no pouting or open-lipped smirks necessary. With her, it’s all about the eyes. Carol nails the passing of information between shooting looks at the customer service counter, or the cold stare from her kitchen as Harge starts another fight. Slow tenderness cultivates romantic longevity. Even Therese, aware but lacking in confidence, is slow to employ suggestive moves.

Love is another word for tension. No matter what genders are involved, it’s mental pressure and physical strain and dependent upon all sorts of invisible magnetism. At its core, a lesbian romance is no different than that of a heterosexual one. A forbidden relationship, however, is. The film rides on tension instead of exposure, and the two leads pull it off with Oscar-worthy control, working to redefine the role of possession in love and how literally it’s held to be true. Even when a few trivial instances arise — the tongue-in-cheek appearance of Carrie Brownstein, albeit briefly, as a possible suitor cheapens its impact thanks to the decade’s clothes fitting like a Portlandia role-play character — Blanchett and Mara never break character, a near-perfect combination of character studies that make its ending all the more powerful.

Previous Story
The Martian: What Would Being Stranded on Mars Be Like?
Next Story
NYFF Film Review: The Treasure
Popular
More Stories
[fu-upload-form form_layout="media" title="Submit Your Photo"][input type="hidden" name="ugc" value="1"][/fu-upload-form]