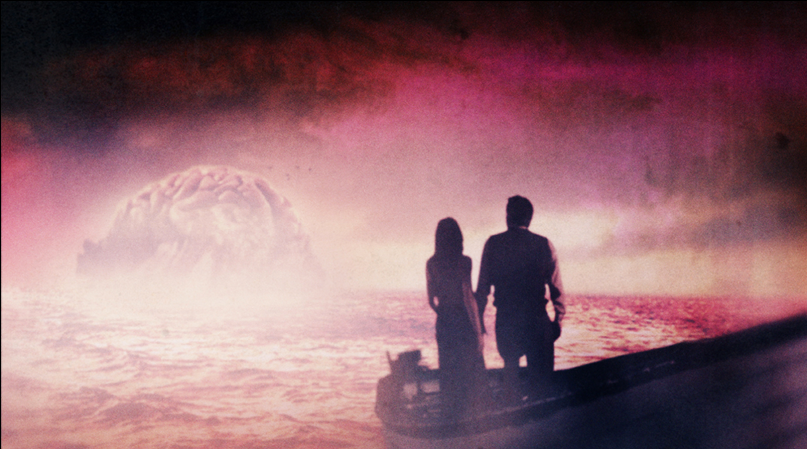 Welcome to the beautiful and strangely moving The Forbidden Room, an antiquarian adventure structured like a Russian nesting doll. Guy Maddin and co-director Evan Johnson take us on a journey through paradox and pastiche in a series of esoterically connected vignettes about memory, nostalgia, and, of course, the joys of taking baths.

The Forbidden Room is a long-form dream found within a deep slumber, likely influenced by taking a long bath just before bed. Take a deep breath now as we attempt to unpack whatever the film is about.

This is the tale of men trying to suppress an explosive jelly batch in a submarine, which segues to the story of woodsmen permeating a cave where challenges of masculinity arise, which then transitions into a sort of feverish cabaret, which leads into brain surgery to overcome a man’s compulsive desire for grabbing buttocks, which then links over to some business about a bone doctor and his beautiful patient, which leaps back to psychiatry and mumbo-jumbo about inner children on a train, which loses focus and jumps back to a virgin sacrifice at the altar of a volcano, but not long before the tale of Lug-Lug, a Jekyll-and-Hyde character, and there are the skeleton insurance defrauders, and then some quotes from Keats and the Gospel of John! And then, and then, and then…

The film exists in a constantly shifting and evolving dream state, one debatably born out of bathing hygiene videos. The Forbidden Room is less about anything concrete than it’s about the strange inner workings of the mind. It’s like a silly, cartoonish dream: nothing makes sense, and everything’s all the more interesting for it. Maddin and Johnson dream of constant fears like pain, the loss of control, death in confined spaces, diminished sexual agency, and other common everyday woes. Yet these themes are articulated by way of the most playful and colorful scenarios, as if to give some credence to the fear only to then cry balderdash. Skeletons can’t hurt you; that’s silly. Broken bones? Those will heal. Through Maddin and Johnson’s beautiful hallucination, a lucid, loose, and even considered statement emerges: Don’t worry, dream nutty.

Where to begin describing Maddin’s gonzo art, for the unfamiliar? Imagine a film utilizing every kind of camera and lens trick imaginable on display. The Forbidden Room employs rear projection, rainbow-colored film, mixed film stocks, broad humor, surrealism, digital transitions that make it look like the reel’s melting, hand-manipulated footage, scratched negatives, voice distortion, and fonts and headers right out of the Soviet Union in the ‘20s. Among other things, of course. It’s all so much, but never a burden. Nothing’s forbidden in Maddin and Johnson’s bag of cinematic tricks.

Also of note is Room’s all-star, international art house cast (Mathieu Amalric, Charlotte Rampling, Udo Kier, and Geraldine Chaplin, among others), all announced and credited at the beginning of their respective shorts. It’s tremendous fun to see venerable names get strange like this. The film’s caked in absurdist wit, a mix of classy and not-so-classy material. Imagine award-winning actor Amalric pulling the pants off his butler in some Marxian routine where he’s trying to save his own hide. It’s wild. Or take the bit about mustaches, a son, and a blind mother. This segment stars Udo Kier as a runaway father, passing his mustache to his son. It’s punchy, but is it a silly slapstick piece with hair props or a stunning child-is-the-father-is-the-man struggle? Yes! And that’s the secret genius of The Forbidden Room. All the wacky bits might seem arbitrary at first, but they grow more meaningful over time.

Maddin’s made a wonderful career out of absurdist films made via archaic processes. (My Winnipeg and The Saddest Music in the World are lovely works of flowing, vintage silliness.) The Forbidden Room may be deemed too avant-garde or piecemeal for some, but there’s no denying the invention on display, and it fits right into the Maddin mold. Out of whacked sensibilities comes something deep. And what’s deeper than dreams about the bottom of the ocean?