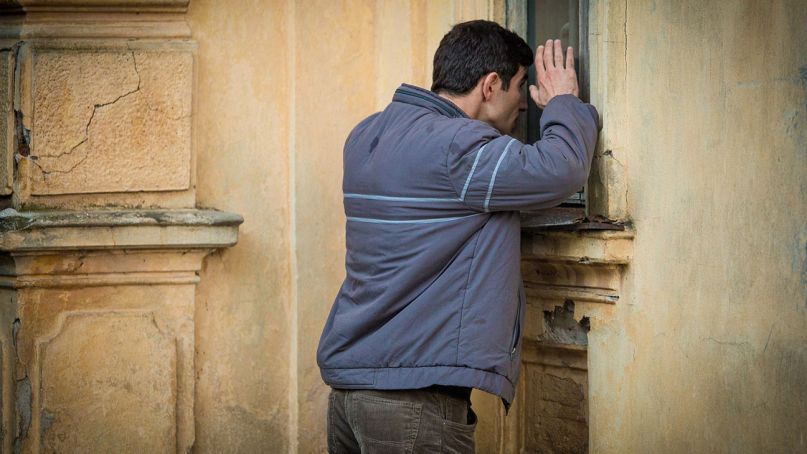 It’s important to discuss this upfront: The Treasure’s US Distribution poster features the two leads in what is an unfortunate, enormous, and frankly film-destroying spoiler of an image. So for starters, please avoid any advertising for The Treasure, and trust in the delirious surprises that you’ll find within. This is the kind of quiet film that turns out to be a surprise in so many delightful, expectation-subverting ways.

In the plainest terms possible, The Treasure’s a deadpan tour de force. You will love watching dolts dig for “treasures.”

Corneliu Porumboiu (of the Romanian New Wave landmark satire 12:08 East of Bucharest) is at it again with a movie so deliberately banal, so humanely selfish, and so comically naïve in its motivations that it forces you to wonder when a squealing metal detector has ever been this damned funny. Yes, this is a statement about Romanian recession, bureaucracy, and the changing affairs of state. The Treasure is absolutely a demystification and drubbing of the treasure hunter genre. But most importantly, and most enjoyably, this is the funniest film about two dimwitted dreamers this side of an Abbott and Costello film in a good while.

Two saps, Costi (Toma Cuzin) and Adrian (Adrian Purcarescu), are middle-class, middle-aged Romanian men. Costi’s a quiet family type who loves his wife and son. He lives modestly, slaves at a boring job, and reads his son Robin Hood every night before bed (nice allusion, too). His life may be a little bland, but he’s doing okay, really.

But one night, Adrian comes a’knocking on Costi’s door. Adrian’s been having some fiduciary troubles, to say the least. See, Adrian was in publishing and got laid off, but he did some great pamphlet work, and well, the company was doing great, and you know how these things are: people don’t read anyway, and Adrian’s bills, his mortgage is piling up on him, and well uh, Adrian needs some money. To be precise, Adrian wants 800 euros to rent a metal detector and seek out unproven treasures in his grandparents’ backyard in the countryside. Adrian says his deceased grandfather told him and only him about the treasure. So it’s got to be real, right?

Any grounded, self-respecting adult would balk at a wild goose chase like this. Adrian has to be nuts; Costi says no, of course. That’s money Costi needs for practical things, like bills. But … who knows what might be down there, right?

Of course the two go for it, and what unfolds from there is a series of mannered moments of perfectly delivered comedy. There’s the awkwardness of having to explain plans to a metal detector rental agency, and the startling, disappointing realization of the whole endeavor’s true expense. There’s the constant haggling over dollars and cents, the realization that personalities might clash in a hunt like this (whether relating to communism, ego, or concern for one’s family, no one’s ever on the same page). There’s miscommunication all around, and the gray, frankly boring experience is the antithesis of a Robin Hood-like adventure.

Think of The Treasure this way: imagine your Nana telling you there are valuable jewels strewn about her old house, or something like that, and you go crazy thinking about them, giving pause for all the possibilities, whether they’re just Cracker Jack collectibles or jewel-encrusted crowns from an ancient era. You don’t feel like an idiot, but you may well look like one, and that is just too funny. That’s The Treasure’s perfect joke: the folly of value, the salivation over what may be the silliest thing.

In the end, the concept of treasure is just a bunch of guys foolhardily betting the farm on holes dug in a backyard. It’s not rubies, or sacks with dollar signs on them, just grown men getting petty over who has to take a turn shoveling next. The Treasure is an assured, perfectly embarrassing kind of funny. But to describe its humor in any further detail would give away too much. Discover it for yourself.