Remember that time Katy Perry sang backup for P.O.D.? You do now

Future pop superstar was a touring member for the nu metal band, sang on their 2006 single "Goodbye for Now" 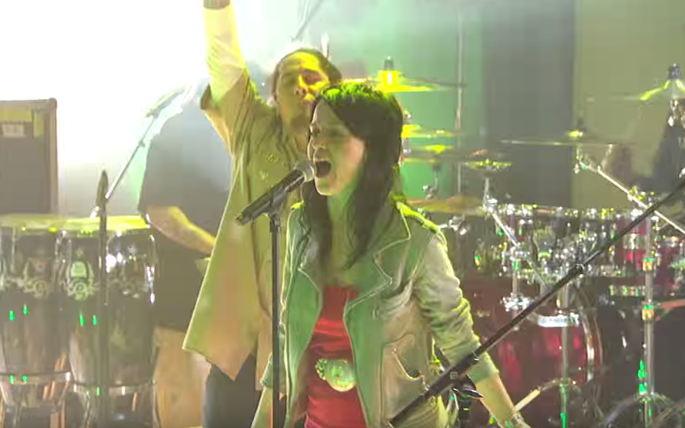 At this point in her career, it’s hard to remember Katy Perry as anything but the larger-than-life, world tour-dominating mega-star that she is. But jump back a decade, and you’ll discover a very different California girl. This is all a matter of public record, but it’s likely that not too many fans know what Perry was into before she kissed a girl. Her career actually began as Katy Hudson, her given name, performing Christian pop music.

Though she switched to contemporary pop in the early 2000s, the Christian connection resurfaced in 2006 when Perry teamed with P.O.D., the rockers most famous for hits like “Alive” and “Youth of the Nation”. Perry was the featured backing vocalist on the band’s 2006 single “Goodbye for Now” off their album Testify.

It might seem too much of a mismatch to be true, but there’s video proof of it all. Perry appeared in the video for the track, and even showed up for a few televised performances. Essentially, she was a touring member of the band for like six months.

Update: In a statement issued to Rolling Stone, P.O.D. guitarist Marcos Curiel took issue with stories saying Perry was merely a backup singer on “Goodbye for Now”. According to him, she was more than that, and he called out “shabby reporting” saying anything different:

“This is revisionist history and disrespectful to our girl Katy who was NEVER a backup singer … We invited her to participate on our record as she was and is still is one of the few pop artists with strong musicianship roots … She paid her dues not as a backup singer but in a van going town to town. This is the problem with music journalism today … Shabby reporting. No research. No history.”

Watch the evidence below.

“Goodbye for Now” on The Tonight Show with Jay Leno:

“Goodbye for Now” on CD:USA:

Perry’s odd pre-fame appearances don’t end there, either. When she first broke out as a solo artist in 2008, she joined the Warped Tour. This seems incongruous now, but back then, she had strong ties to the indie alternative scene. In the early 2000s, she dated Relient K’s Matt Thiessen, and actually ran out on stage once when the band covered Eminem’s “Lose Yourself”. She then launched herself into the crowd in an attempt to stage dive, but bit it hard. There’s video of this, and you can see Perry appear around the 00:45 mark.

Is this where the opening lines of “Self Inflicted” come from? Thiessen wasn’t the only scenester Perry was involved with, either. In 2006, she was dating Travie McCoy of Gym Class Heroes and played his final on-screen romance in the clip for “Cupid’s Chokehold” (he wrote the song before they got together, though).

She was also featured in Carbon Leaf’s “Learn to Fly” video.

And just because we’re digging deep into her history, let’s not forget the time she backed up Mick Jagger on his 2005 Golden Globe-winning song “Old Habits Die Hard”.