The Concert Promoters That Took Over Texas 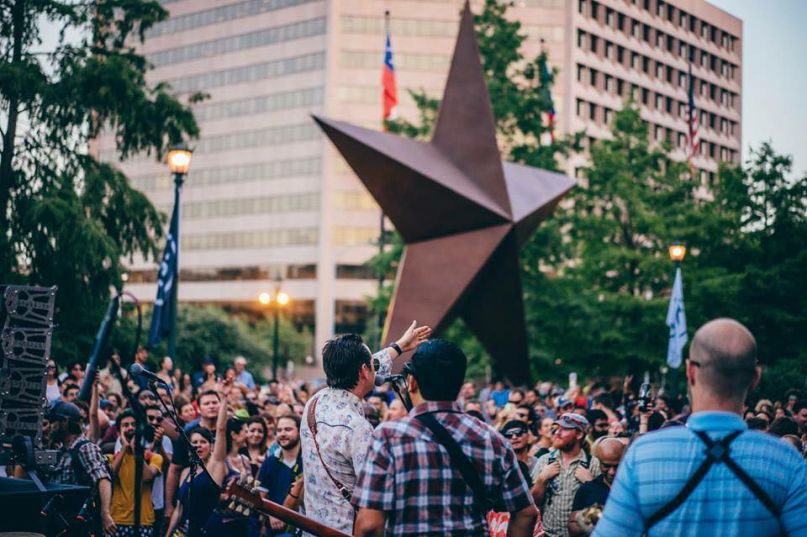 This fall marks the 10th anniversary of Fun Fun Fun Fest, the other Austin festival that grew from humble beginnings into one of the most anticipated music events in the country. Originally started in 2006 because a group of shows happened to be booked the same weekend and founders Graham Williams and James Moody decided to make a festival out of it, FFF has become a massive undertaking, bringing in artists like Run DMC, M.I.A, Judas Priest, and Wu-Tang Clan. For Transmission Events, the concert promotion company run by Williams and Moody that puts on the festival each year, this fall marks another achievement for the organization: They recently began booking shows at the landmark Houston venue Fitzgerald’s.

Along with their expansion to other cities in the past few years, Transmission now has the ability to book shows in all four major cities in Texas: Austin, Dallas, San Antonio, and Houston. They’ve evolved into a regional powerhouse for booking live music that, while much larger than its DIY roots, offers a local alternative to behemoth concert companies like Live Nation.

Transmission started booking shows in Texas to give the state its own version of the ’80s/’90s Goldenvoice shows that Moody went to growing up in Southern California. “They used to do all the interesting, hard-to-get, fun shows, and we didn’t feel that was being done in Texas at the time,” Moody explains. Williams describes the scene at the time as “tribal,” with house bookers competing with each other and focusing on getting a busy night for the bar rather than “looking out for the bands and putting them in the right room for the show.” Looking at companies around the country like Bowery Presents that had a strong identity, Williams wanted to bring something similar to Texas.

While Moody laughs at the idea that Transmission has a master plan, Williams notes that being able to book shows in all four major markets in Texas became a goal of the company a couple of years ago. They now see it as an important milestone, making them a sort of “one-stop shop” for booking bands to play in Texas. “It’s hard getting through the south,” Williams says, noting that the area has “not as many cities to play in, longer drives, and smaller scenes.”

Being able to go to a booking agent or band and offer them four cities to play in increases the likelihood they’ll make the trek out to Texas at all. Williams thinks they’re working to challenge preconceived notions about Texas as well. “Everyone thought San Antonio was only heavy metal bands with no love for everything else,” he says, “but we’ve been doing shows there since this spring with Black Lips, Strfkr, and Death from Above 1979 all packing venues down there. It’s been amazing.”

Working with four markets as opposed to one naturally creates additional obstacles, such as coordinating a larger staff across cities and dealing with additional partner venues where there’s less control in the decision-making process. “There tends to be less ownership when it’s newer and further away, so you need to meet in the middle on a lot of decisions, but that’s just how any good compromise and partnership goes,” Williams explains. For now, the expansion has created more opportunities to partner on unique ventures, such as the Lone Star Texas Heritage Festival, a free traveling festival that stopped in all four major Texas cities this summer. By partnering with brands, Transmission is working to capitalize on its vantage. “If we can execute interesting and successful shows across a number of Texas venues, I think it helps build confidence with bands and agents over time,” Moody says.

While Transmission is steadily working to expand its presence throughout the state, this year has brought a number of difficulties in its hometown of Austin. The company recently won a prolonged struggle with the city council to determine which areas of Auditorium Shores, the park where Fun Fun Fun Fest has taken place since 2011, could be used this year. “You’d think at 10 successful years and no problems to speak of with the community, it wouldn’t be an issue, but we’ve literally had to speak in front of the city council, the mayor’s office, and the media every single year to get approval to do our festival,” Williams says. “It’s nerve-racking not knowing if you’ll have a home the year before an event.”

While the festival is set to continue in its current home this year, and ideally will for the foreseeable future, Williams stresses that a change in location wouldn’t be enough to stop them. He says there’s “no reason to stop doing FFF Fest unless there aren’t enough people to support it.”

The past two months also saw the closures of two venues in downtown Austin, Red 7 and Holy Mountain, where Transmission frequently booked shows. “It’s frustrating as hell having great rooms spend time and money building their brand and ability to operate and then get fucked,” Williams explains. “At the same time, I have seen so many clubs open and close all while the scene kept growing.”

Transmission has advocated to preserve the Red River area of downtown where many clubs have traditionally thrived, lobbying city council and helping to form a “Cultural District” for the area. “I wish we all felt more stable, but we don’t,” Moody says. “We need a master plan for the area with a smart balance and mix of uses … that needs to have the support of City Council and the community.” Moody notes that having a new mayor and city council has created uncertainties as “the current leadership hasn’t clearly articulated its position on supporting the live music culture in Austin.” While the company has been expanding its business to the rest of Texas, Williams emphasizes that Austin is their home base and strongest market, and they have no intentions of backing down. As Moody puts it, “It’s important to remain optimistic, but not naively so.”

No matter the city, venues open and close, neighborhoods change, and scenes evolve. Williams believes that the city designating Red River a historical area helps the fight and that it’s important for the city and community to get behind the ecosystem that has been cultivated in the area, the home of many live staples and the central hub of SXSW. Williams emphasizes that he is not against growth in the city and believes the more people Austin attracts, the more people there will be to support the music scene. “I fucking hate that ‘don’t move here’ motto a lot of kids are proudly printing on their bumper stickers,” Williams says. “It’s so lame. It’s the hipster equivalent of ‘go back to Mexico/close our borders.’ Who is anyone to say who can and can’t move to Austin?”

Noting the neighborhoods that have come and gone over the past 20 years, Williams believes that even if Red River fell apart, businesses and scenes would find new areas to thrive. As Moody puts it, “An Austin without Red River will survive, but it will suck.”

For now, Transmission’s biggest focus is the 10th anniversary of Fun Fun Fun Fest. The festival remains notable for its variety and draw, curating lineups that focus on indie rock, rap, electronic, punk, and metal. This year’s lineup brings together legacy acts like Venom, Head Wound City, and Drive Like Jehu with contemporary artists like Grimes, Rae Sremmurd, and Schoolboy Q. With more and more festivals popping up in the area, it becomes a greater challenge to craft a lineup that stands out.

“In the beginning, most of the bigger fests booked adult contemporary, jam bands, and the occasional indie acts,” Williams says. “As independent music got bigger and bigger, they started booking the stuff folks like us had been booking for years. We didn’t stop liking or supporting those acts, so we still book them as well, but we never want FFF to just start to look like everything and become cookie cutter.”

Williams and Moody believe this year’s lineup meets that goal, with rare sets like Jane’s Addiction celebrating the 25th anniversary of Ritual De Lo Habitual and Dag Nasty’s reunion set. At the same time, they place a big emphasis on being a festival where people can discover new acts, like Odesza, Alvvays, or Title Fight.

After working to pull off reunions many thought were never possible, like Run DMC in 2012, Moody and Williams’ self-proclaimed “unrealistic wish list bookings” don’t seem that outlandish: Born Against, Jawbreaker, and Fugazi all make the cut. While both are quite upfront about the fact that they’ll probably never be able to get Fugazi to play the festival, Fun Fun Fun Fest has become the kind of event that makes the impossible happen.

As there have been no shortages of strife to get to this point, from politics to budget and marketing, Transmission has been celebrating the 10th anniversary in style with a string of events in the weeks leading up to the festival including pool parties, roller rink and bowling events, shows at the Bob Bullock history museum, and a performance by Neon Indian in a “ghost town.” Transmission has always focused on bringing extras to their festivals, from the inclusion of a skate park and wrestling ring at the fest to shooting off a Taco Cannon every year that once made it onto a Good Morning America special, one of the high points of the organization’s tenure.

Williams sees the festival as their greatest accomplishment, as they’ve made it work with just their small team and turned it into a festival that brings in patrons and attention from around the world. “It’s just been great to build something we believe in and carries with it what we believe as a concept, that all progressive music, while different in many ways, belongs at the same party,” he explains.

Williams and Moody believe that they have managed to grow Transmission while still embodying the punk ethos and DIY spirit that the company was founded on. For Williams, it’s a matter of being happy to have a job doing what he loves and believes in and learning how to work small within a budget. While they have had partners on the financial side throughout the years, they have never had to sell off what they do. “If we find a cool partner, we will consider it if we can align interests. I think you can do all of that, and grow, while sticking to your original intent,” Moody says. “Last I checked, it’s pretty punk rock to build a sustainable business through shows that creates jobs and feeds families.”