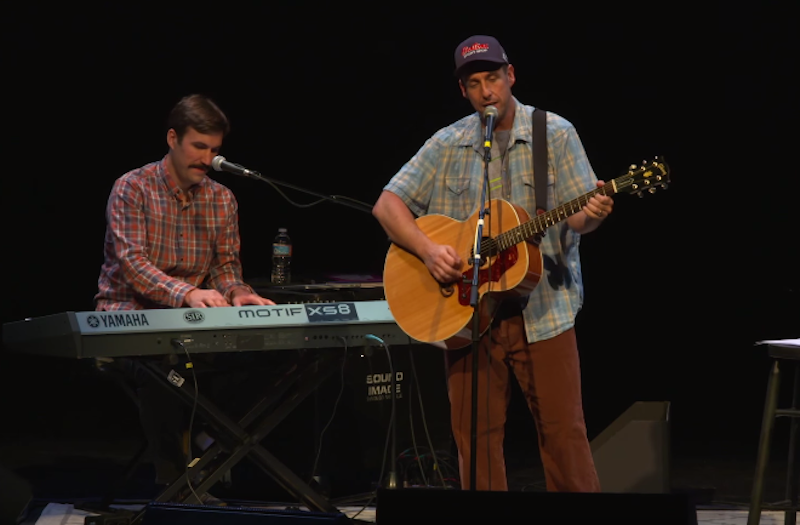 We Jews don’t get a lot when it comes to the Holiday season. Oh sure, we get eight days instead of one, but you really only get the good presents on the final night. In a mall covered in green and red tinsel, we have to track down the little square with the blue-flamed menorah down the hall by the boarded up Sam Goodie where no one ever moved in. However, while we may not have a “Jingle Bell Rock” or a “White Christmas”, at least we have Adam Sandler.

In 1994, Sandler gifted the chosen people with their most iconic holiday jingle ever, “The Chanukah Song”. He’s since followed up the original with two renditions, “Part II” in 1999 and “Part III” in 2002. Now, 13 years on from the last update to the song, Sandler has released “The Chanukah Song Part IV” — and it’s glorious.

The song was debuted at a gig in San Diego last week, and now video of Sandler’s latest rundown of high-profile Hebrews has come online. Jesus and Punky Brewster get mentions within the first ten seconds, and it only takes off from there. After name dropping Drake and the guys who founded Google, Sandler sings, “We got Scarlett Johansson/ Talk about a kosher crush/ And if you need a higher voice to turn you on/ How about Geddy Lee from Rush!” Unfortunately, it’s not all good news. “Jared from Subway/ God dammit, a Jew/ But guess who’s Jewish and could fix him?/ Love Lines’ Dr. Drew.” David Beckham’s apparently a quarter Jewish, and Shia LaBeouf is half — “But 100% nutty,” Sandler adds.

To hear who else the tribe can claim as their own, check out video of “The Chanukah Song Part IV” below.