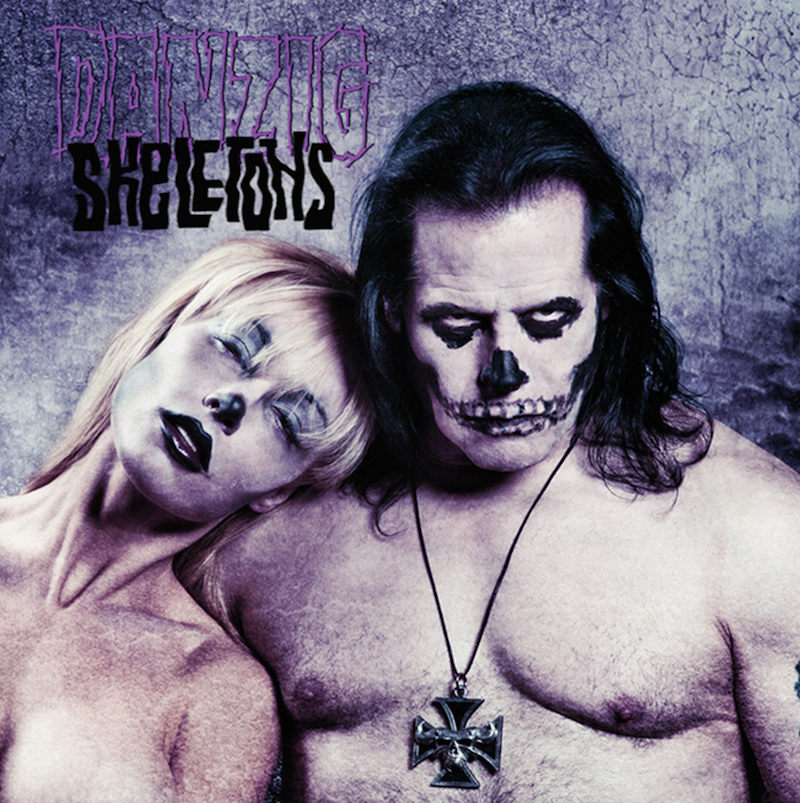 When it comes to the metal and hardcore punk scenes, Glenn Danzig is about as legendary as you can get. With his work in the horror punk outfit Misfits, Samhain, and the eponymous project Danzig, he has become a subcultural icon with a trademark voice and work ethic that won’t quit.

It’s admirable for a man so influential to release an album made up of songs that impacted him deeply. The songs that comprise Danzig’s 10th album form, as Danzig says, “the actual basis and skeleton of what I listened to growing up, ultimately informing the kind of music I like.” And Danzig’s way of taking the songs that formed the foundation of his music and making them his own kind of works.

Skeletons brings the listener along on a journey into Danzig’s musical history, covering a wide range of music that all coheres when filtered through his singular voice. The album begins with an homage to grindhouse biker films of the ’60s, as Danzig takes the theme songs from Devil’s Angels and Satan’s Sadists and makes them sound like songs he might have written himself. The former starts with pure punk energy, the likes of which likely still keeps Danzig kicking, and the latter is balladic, bluesy, and pleasantly faithful to the original. Skeletons then mostly settles into a mixture of ’60s rock and pop songs, from deeper cuts by artists like Black Sabbath and Aerosmith to surprises from outliers like Elvis Presley and The Everly Brothers.

The pop selection presented here mostly relishes the the psychedelia that defined the ’60s, and with Danzig’s reworking, the songs slide surprisingly well into the present. The Litter’s “Action Woman” and The Troggs’ “With a Girl Like You” lose their grooving bass and steady tempos in favor of heavier riffs in a loose and carefree style. The Young Rascals’ “Find Somebody” ends up being one of the genuine highlights of the record thanks to Danzig’s ability to take the energy and spirit of the song and cast it in his own torchlight without losing any of the fun.

The most damage is incurred, ironically, when classic heavy rock songs are squeezed through Danzig’s wringer. The natural magic of Black Sabbath’s “N.I.B.” is lost with Danzig’s inability to do Ozzy’s vocal work any justice, not to mention the obvious and unfortunate favoring of heavy riffs over Geezer Butler’s unique bass work. Skeletons’ canned production is tolerable up to this point, with the riffs and drums serving as background noise to Danzig’s trademark voice, but it only dilutes a track like “N.I.B.”.

Even more uninspired is the adaptation of Aerosmith’s “Lord of the Thighs”, in which a seductive and grooving mood is replaced with dull riffs and an obviously bored Danzig. More fun lies in Danzig’s Elvis impression on “Let Yourself Go” and his vocal enthusiasm on ZZ Top’s soulful ballad “Rough Boy”.

Skeletons’ production is monotonous, often favoring pick squeals over musical nuances, and always relying on Danzig’s voice to come through way over the top. Even so, it is a Danzig record, and Danzig realizes his strengths lie in having fun with the songs that he loves. Skeletons succeeds a little, too, in doing what it set out to do: baring a little bit of Danzig’s blackened soul. The final track, a cover of The Everly Brothers’ “Crying in the Rain”, loses the heavy riffs in favor of discordant keys that maintain the original’s downtrodden spirit. We see a little bit of the doom and gloom that has always preoccupied Danzig, and in sharing that, even in fleeting moments, Skeletons does what it set out to do.

Essential Tracks: “Devil’s Angels”, “Let Yourself Go”, and “Find Somebody”