Frankie Cosmos – Fit Me In 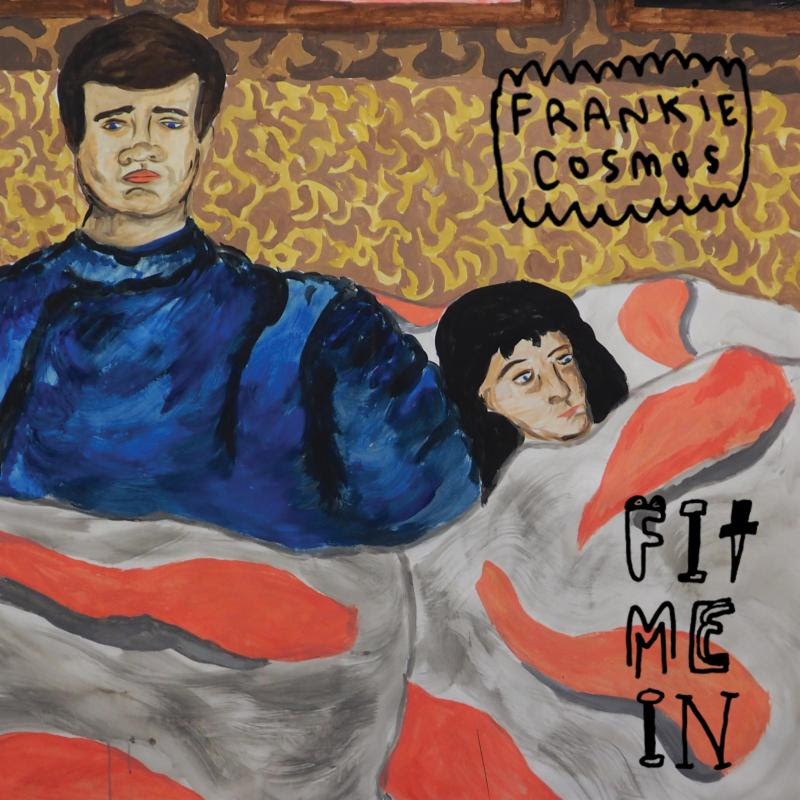 Given her capacious catalog, talking about the four songs and roughly eight-minutes comprising Frankie Cosmos’ latest EP, Fit Me In, feels a bit like pulling a book from the shelf and expecting to find something out about a library. It’s a window to a world, but a small one. But as Cosmos, Greta Klein always plays the little-big game, zooming and panning across her uniquely bespoke canvas. Fit Me In proves to be something of a bridge: suggestive of a reported full-band LP coming in 2016 and reaching back to the pretty minutia of her best-known work, Zentropy.

On Fit Me In, Cosmos deploys more synthesizers than guitars, a new move, though the EP is still replete with her trademark downcast brilliance. When zoomed-in with enough magnification, everything looks either beautiful or horrifying; elementary school microscope sessions tell us as much. Cosmos knows no other way of expanding her universe, both a bourgeois and impressive form of narrative imperialism — to make the world big by pressing eyes right up against it. Only Klein can make a lyric like, “Look mom, I’m hobbling through,” from Zentropy’s centerpiece, “Buses Splash With Rain” appear authentic, when her real-life parents are famous actors (Kevin Kline and Phoebe Cates).

Taking small problems seriously lies very much at the core of Klein’s song-writing, a methodology unchanged on Fit Me In. Album opener “Korean Food”, actually about a boy, ends with a languid, repeated “anyway,” as if the project of making music involved a ham-fisted segue from one thing to another, from one zoomed-in world to another. Album standout “Young” shows Klein distancing herself from the role of the precocious, young talent. She sings, “Have you heard I’m so young?/ I heard about being young,” against a backdrop of a slowly pulsing synthesizer progression, as if the concept of youth were something to be studied, examined up-close. Importantly, “Young” is the only track on Fit Me In with a dose of self-consciousness — not Cosmos as avatar for any of the minute failures and trials of any post-adolescence, but Greta Klein as Greta Klein. “I wrote some songs that I sung,” she sings dryly.

It represents a subtle change, but Fit Me In is no less confessional than her previous work; it merely extends her experiences allegorically. A song like “Sand” clocks in at a form-meets-function 49 seconds and involves a downtown diorama of kissing “your stupid thumb” and touching all the books outside the Strand bookstore. “Sand” could be about anything or anyone. Despite its obvious signifiers, “Sand” sounds and feels like what it is: to be young, in love with the world so much that it pained you. It is a phenomenological approach, to be sure; Cosmos knows best what she can see and feel, a sort of epistemology intimately tied to the importance and realness of people and things. Her snow-globe universe of New York City could be anywhere, the nouns swapped for other people and places.

And perhaps this dose of universality keeps Cosmos’ cutesy, upper-class problems from feeling dishonest. Likely, your father didn’t star in Wild Wild West, and, likely, you don’t date another marginally famous musician. The listener still might resonate with a line like, “With this I’m scraping by/ At least it’s cute that I try,” on “Young”. Her gift is making the world legible and abstract at once. “I notice more of everything,” Cosmos confesses on “Sand”. It’s true. Her tiny New York can translate anywhere. Up close, your skin looks like the surface of an alien landscape. At the right level of magnification, far-away places exist on and in all of us.