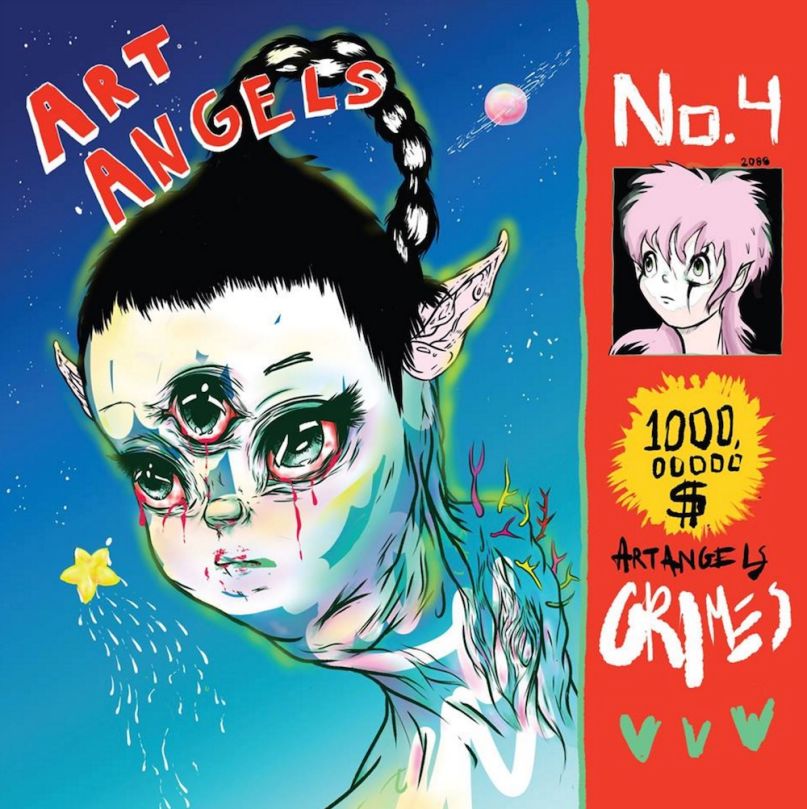 Some artists use alter egos to protect their private selves from their performative ones; others use their personas to become more themselves than they ever could be without an audience. Grimes, the chimera puppeted by Canadian producer Claire Boucher, falls in the latter camp. Her art, her fashion, her music, and her personality appear seamless across the channels where she’s chosen to display them. Grimes is a maximized self, sparkling, mutable, and inexhaustibly alive.

The accessibility of the Grimes character is in part what’s made Boucher such a central figure in the post-blog music landscape, though it’s the music itself that’s allowed her to hold that shaky position. Her first two records, Geidi Primes and Halfaxa, crept out five years ago on the Montreal label Arbutus full of slimy, sharp-edged synth experiments that twisted her voice to beautiful and grotesque extremes. Then 2012’s retro sci-fi opus Visions piled eyes on Grimes by the ton, and Boucher had to navigate the strange condition of being suddenly, acutely seen.

For the past three years, Grimes has walked the tightrope of micro-celebrity, having her words yanked out of context, getting punished for things she didn’t really say, and all the while facing down an enormous need for more: more appearances, more content, more music. The Grimes brand grew opaque. Boucher tweeted less and worked more, drawing away from the sect of critics that would peg her as the voice of the Tumblr generation: mythical, whimsical, and always, always available.

Grimes’ fourth album, Art Angels, is simultaneously her most accessible and her least personal body of work. You could trace lines into Boucher’s own narratives in the ragged edges of her first three LPs; you could find the details of her hurt and fold them into your own hurt. But Art Angels is pure Grimes — performative, maximalist, joyful, and broad.

While Visions borrowed deeply from the ‘80s in its fat analog synths and layered whispers, Art Angels skips to the next decade, embracing turn of the millennium mall pop and jock jams. Off-brand chart-toppers like t.A.T.u., Alice Deejay, Sonique, and Savage Garden swirl around in volume four of Grimes — she’s playing guitar now, and she fuzzes it out so it sounds like a toy bass and then wraps whole songs around it. Art Angels’ production is as rich and dense as ever, but it sounds optimized for blasting out of car windows or laptop speakers. You can listen on good headphones if you want, but you’ll sort of be missing the point.

At Art Angels’ core is an attitude, not an aesthetic. You can read a degree of antagonism into Grimes’ lyrics, especially the wistful kickoff “California”, where she seems to seethe at the way the media machine has processed her over the past few years: “I didn’t think you’d end up treating me so bad,” she sings. “The things they see in me I cannot see myself/ When you get bored of me, I’ll be back on the shelf.” But the words are open enough for you to use them wherever you need them — you can wrap them around a failed relationship or a shitty living situation, and they fit.

“California” might be the only song on the record written squarely in Boucher’s perspective. The rest tend to assume a wide cast of characters, and we get Boucher playing Grimes playing Al Pacino playing a gender-morphing vampire — a whole theater ensemble in one verified jam, “Kill V. Maim”. “I’m only a man/ Do what I can,” Grimes repeats, and then breaks off into a vicious cheerleader chant over a sandstorm of a beat. The hypermasculine and hyperfeminine coalesce into a single manic floor show where Grimes is director, producer, and star.

Inside all the artifice runs a deep current about music itself, what it can do and what can be done to it, and the power it holds over us in our most vulnerable moments. “This music makes me cry,” Grimes sings in “California”. “It sounds just like my soul.” Then, on “Belly of the Beat”, she reiterates: “And you never get sad/ And you never get sick/ And you never get weak/ We’re deep/ In the belly of the beat.” Strung between acoustic guitar strums and Boucher’s time-tested drum machine architecture, the track longs for surrender to the kind of music that can flush away the mundane.

Because the details people thirst for from Grimes — the jokes, the politics, the opinions and alignments — are all mundane. They’re a way of pinning someone down to a world she’s trying to transcend. Art Angels lashes back by digging at sublimity in cast-off corporate pop, by closing herself off to the blogs and trying to reach directly to the listeners. This isn’t an album made by someone who’s trying to become a figurehead for a generation. Grimes isn’t trying to save music. She’s trying to lose herself in it, to sink deep into what she loves and the reasons she loves it, to produce a robust excavation into the sounds we cling to as pre-teens, the songs we use to sculpt our nascent identities. Art Angels looms as tall as the singles you carry inadvertently in your brainstem. It has the same aspirations.

“Every morning there are mountains to climb,” Grimes sings on a reworked version of “Realiti”, which first saw the light of day in demo form earlier this year. “When I get up this is what I see/ Welcome to reality.” Her lyrics stretch broad enough to curtain anything, but the fractured wisps of her voice coil around one feeling in particular: the wonder at being subsumed into something bigger than yourself. After Visions, the only thing Grimes could do was to grow as big as the landscape around her. Here’s her mountain.