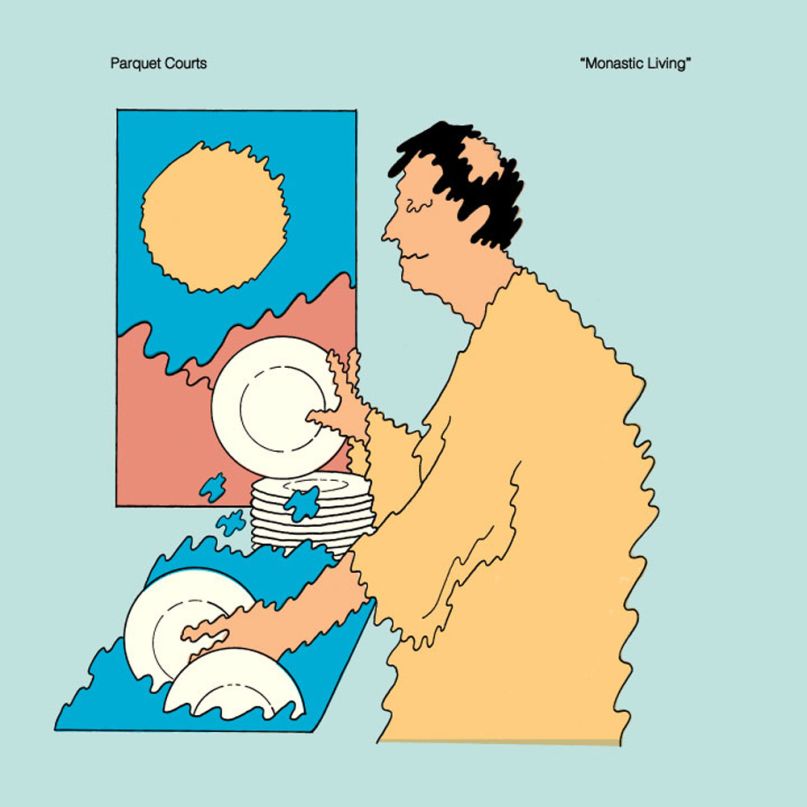 When Parquet Courts smashed their way into the indie rock consciousness with Light Up Gold in 2013, we thought we had them figured out. Their reference points were easy enough to pinpoint. The band’s sound played like a love letter to a very specific piece of New York’s musical history, beginning somewhere near the decadent pre-punk cool of the Velvet Underground and weaving in the art school smarts of Television and the noisier inclinations of Sonic Youth. Parquet Courts won over fans and critics by putting a smart, contemporary spin on well-traversed and historically revered musical terrain.

Had the Brooklyn-by-way-of-Austin band stuck to their drill, it’s unlikely anyone would have faulted them for it. But the three releases that quickly followed their breakthrough hinted at the outfit’s refusal to completely stay in pocket. Last year’s Sunbathing Animal stuck pretty close to its predecessor’s script, albeit with some quirky, more cerebral deviations. The same can be said for last year’s Content Nausea, released under quasi alter ego Parkay Quarts. There’s a creative itch that they’re desperate to scratch, and on their latest release, Monastic Living, Parquet Courts indulge their experimental whims in the most far out and surprising of ways.

If past releases merely hinted at the avant tendencies that lurked beneath the band’s sharply crafted post-punk, then Monastic Living is a musical coup, one where their ideas and creative ambition completely overthrow any concern for anything approaching conventional song structure. Starting with Max Savage’s opening drum pattern, lead track “No, No, No” begins the EP in traditional rock fashion. But it’s one small piece of three minutes worth of music that owes anything to their prior work. From there, Parquet Courts take a forked path down some unexpected musical avenues.

Monastic Living, their first release for Rough Trade, is a noisy minefield of crazy sounds and sonic experimentation, with musical exploration largely standing in for their 1977-era New York influences. “Monastic Living 1”, one of the EPs three tracks to liberally drift past the six-minute marker, unravels in a fit of sonic upheaval reminiscent of early Kraftwerk or Devo. Elsewhere, there are tracks that abrasively claw at listeners’ ear drums ( “Elegy of Colonial Suffering”), others that fall down Kevin Shields shoegaze k-holes (“Frog Pond Plop”), and still others that feel like something from an early ’70s krautrock time capsule (“Prison Conversion”). There’s a devil-may-care attitude to the songs, which are marked with the kind of freedom that comes with a band totally willing to throw everything against the wall and see what sticks.

That willingness to jump off the deep end should be applauded, but there’s no guaranteeing the worth of whatever comes out of the exploration. It’s probably best to call Monastic Living what it is: an excuse to cut loose and have fun in unexplored musical territory. But it’s ultimately a self-indulgent quest. The end result plays like a record for the band much more so than the fans, who might be hard pressed to hang in there with it for repeated listens after the curiosity factor wears off.

It’s easy to guess that Parquet Courts will loop back to their more streamlined art punk sounds moving forward, but Monastic Living proves, if nothing else, that this is a band that’s unafraid of taking the occasional off-the-wall detour. It’s hard to begrudge them that, but their latest EP sounds more like something they needed to get off their chest than any concrete musical statement. If laying it down and putting it out helps get back to what they do best, then all the power to them.