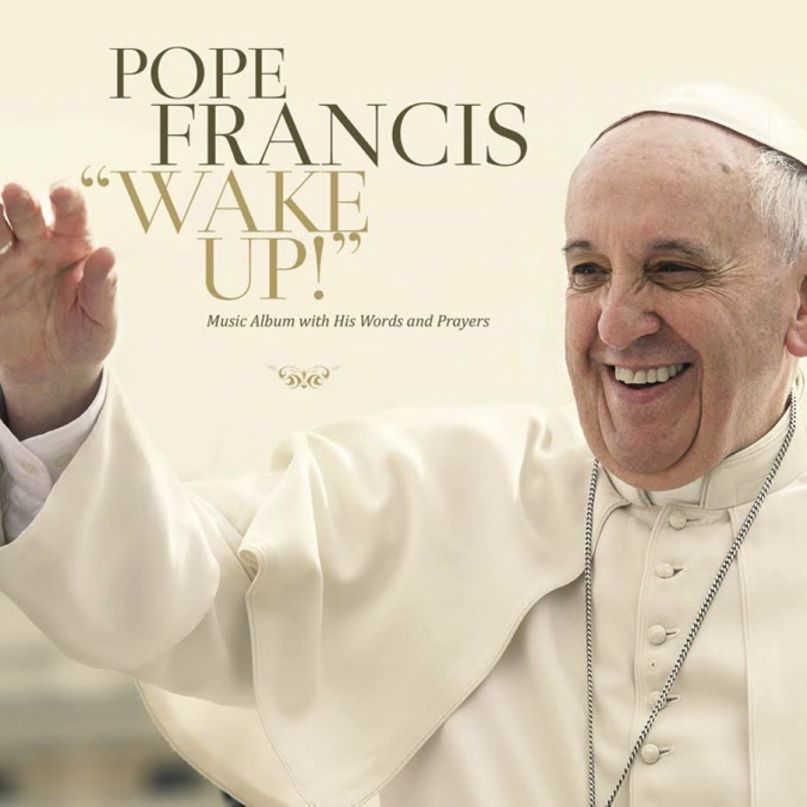 When it was announced in September that the leader of the worldwide Catholic Church would be releasing a prog rock album, the lay public’s reaction was one of disbelief. Pope Francis has indeed been more progressive than expected since taking the Holy Office in 2013. But papal reforms are one thing. The idea of a 78-year-old man strapping on a guitar and screaming into a microphone is something else entirely. Even the most liberal of lapsed Catholics had a difficult time wrapping their heads around that image.

This time, at least, the disbelievers were right. The Pope does not attempt any Peter Gabriel impressions on Wake Up!, nor does he explore the Sistine Chapel’s capacity for reverb. The 11-song album is, in fact, far more traditional-sounding than the music press (ahem) made it seem in the months leading up to its release. That’s kind of a bummer, especially when Rolling Stone promised “skyscraping electric guitars reminiscent of Godspeed You! Black Emperor.”

It’s fun to imagine the Bishop of Rome vibing on a bunch of Canadian anarchists, but the comparison doesn’t quite hold weight. Wake Up! has much more in common with Pope John Paul II’s Abbà Pater and other Vatican-approved releases than it does with Asunder, Sweet and Other Distress. The album might prove inaccessible to some of the 1.2 billion Catholics worldwide, but that’s only because it features speeches in English, Italian, Spanish, and Portuguese.

The music itself is an amalgamation of popular styles from around the world, ranging from Latin rock (“Cuidar El Planeta”) to contemporary pop ballads (“Santa Famiglia Di Nazareth”). Certain elements of prog rock do show up here and there, namely on lead single “Wake Up! Go! Go! Forward!”. Composed by Tony Pagliuca of Italian prog band Le Orme, the track generates tension with atmospheric synths and soaring guitar riffs.

Even so, the music never threatens to eclipse the message. If anything — and this might sound like a strange criticism of a Christian rock album — it’s too reverential. Pagliuca and Don Giulio Neroni, the album’s producer and artistic director, seem uncomfortably aware that they’re working with one of the most powerful humans in the world. This prevents them from taking any true risks, not that a recording of this nature really demands any intense risk-taking.

The bigger issue is that it prevents the individual compositions from registering as coherent. As soon as a particular melody begins to take root or shift in an interesting way, it’s yanked aside to allow Francis an open, mostly silent room in which to speak. In too many cases, the music struggles to lend gravity to the Holy Father’s message; it simply exists as a kind of aural placeholder, not unlike the person who shuffles out of bed for Sunday Mass but dozes through the sermon.

That’s a shame, because the sermon in this case is worth hearing. Pope Francis isn’t the most engaging speaker (sometimes it sounds like he’s on the verge of falling asleep himself), but his messages are enthralling at best and mildly uplifting at worst. In any case, it’s refreshing to hear a Pope address issues like poverty, climate change, and justice for humanity’s weakest members. It beats the endless newsreel of controversies and conservative dogma we were treated to by Pope Benedict XVI, which — thank God — the Vatican had the good sense not to make into an album like this.

Even at its strongest moments, Wake Up! won’t spark any kind of religious revolution. But it will earn the Church some cool points and help Francis promote his image as a man of the people, which is no small thing to an organization with sharply declining membership. As for your dream of the Holy Father fronting a King Crimson cover band, well, rest assured: They’ll be playing all the best bars once you finally get to Heaven.