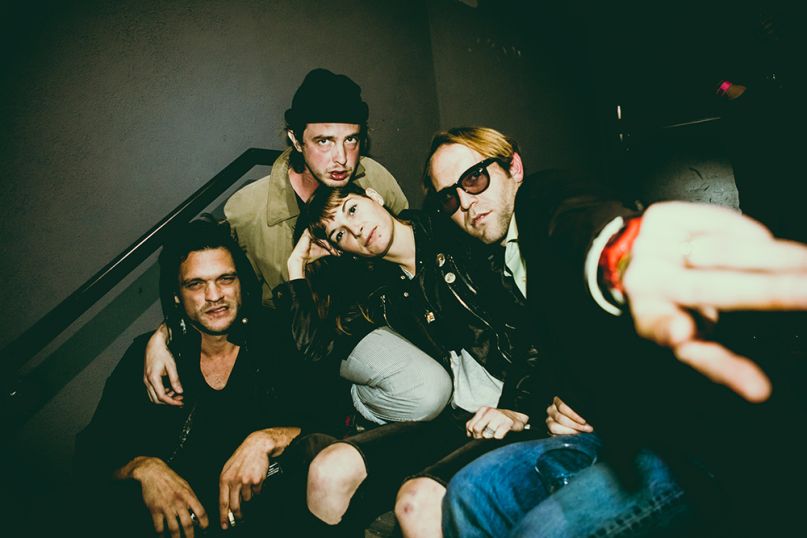 Welcome to All Access, a new feature in which a Consequence of Sound photographer doesn’t just see a show, but gets an inside look at what goes on before the band takes the stage.

Backstage at Teragram Ballroom, I find out from a friend and photographer of BRONCHO that the band has been touring on and off for almost two straight years now.

“Really?” I ask, surprised and uninitiated in the world of touring bands. “That’s insane.”

It’s a couple hours before they go onstage, and they’re understandably tired having just come straight from San Francisco, but still, the atmosphere is very relaxed and welcoming. Bridget Fonda’s 1993 film Point of No Return is playing on an iPad while they eat tacos and Thai food.

They tell me they’re going to take a longer break than they’re used to after this tour to finish their next album. They only have two shows left after this. “I’m probably going to be bored,” drummer Nathan Price says. It’s an interesting and weird lifestyle, being in a band and then being subjected to a normal life in between long stretches of touring. Their website still lists their 2010-2012 shows, which gives me a bit of anxiety just trying to take it all in. If you’re going to commit to this life, you’d better be relaxed.

Meanwhile, frontman Ryan Lindsey pops in and makes some lighting and set list decisions with the rest of the band. I hear plans of doing mostly red lights, and I’m immediately relieved I’m not just taking live photos tonight. He brings in his brother Eric who I learn is a pastor. “He’s actually the only one who isn’t,” Eric says about Ryan. “We have another brother who’s also a pastor.”

“But they started this whole thing,” says Ryan. “They had bands, too.”

After an hour or so of quiet, the people start coming in. From members of The Growlers to old high school friends, the gathering in the green room is becoming a small party of its own. I end up talking to another guy named Eric who tells me he’s from Oklahoma and coincidentally in town for work. He’s known Ryan for a really long time. “He’s a good songwriter,” he says. I agree with him.

Finally, they get onstage and the mood shifts. Ryan is making various noises on the microphone, much to the audience’s delight, bassist Penny turns intense and focused, guitarist Ben King looks calm and ready, and Nathan makes final adjustments to his drum setup. Then the music starts, gorgeous red lights flood the stage, and they rock in a way that’s anything but relaxed.