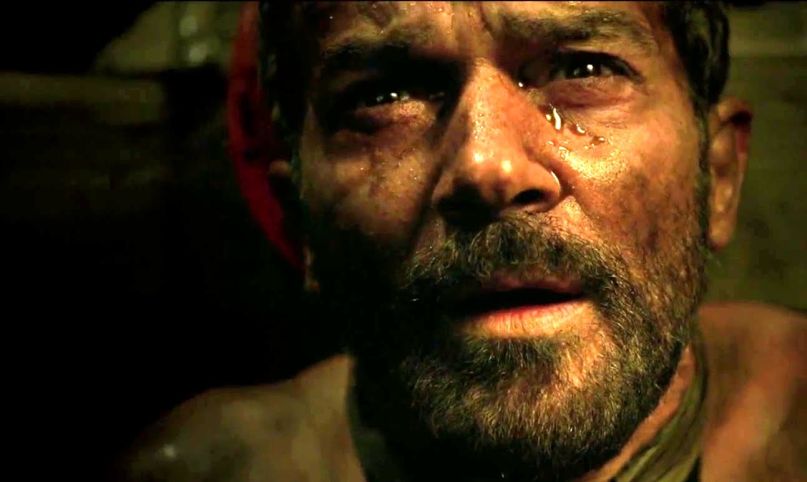 The story of the 2010 Chilean mining accident was gargantuan news, viral and metaphorical gold, and the burial and rescue of 33 men in a copper mine spoke to worldwide notions of faith and revival. Of course, their stories were going to be optioned and turned into books and TV specials and why we’re here today, a big Hollywood motion picture. (Ooh, and it’s got Antonio Banderas, too! He’s a handsome rascal!) What this is all meant to say is that any film dealing with the recent and the real will have the challenge of paying homage, interpreting a scenario that captured people’s attention on a large scale, and overcoming predictability. In Patricia Riggen’s The 33, it’d be pretty shocking to not see the men get out (and the film wouldn’t be the commercially viable uplift it always wanted to be). This film was always going to be either mushy or dire.

And yet, when James Horner’s South American pipes and sentimental compositions layer over the dim desperation of those men, it gives The 33 a sincere and emotional tone that excuses, even champions, its predictability. Everything might be okay when Horner carefully places strings over what could be an exploitative affair. Horner is The 33’s true rock.

The 33 is a stable studio job about a recent headline, one that sympathetically gets away from its legacy and focuses on the human element. Patricia Riggen’s retelling of the Chilean mining accident truly cares for the men who were stuck underground for 69 days in the Atacama Dessert.

For the folks who didn’t see the headlines: 33 men embarked on a doomed dig back in August 2010, where a rock the size of two Empire State Buildings clamped down and caved in on a copper mine. The men had extremely limited supplies (a trunk full of cookies and canned tuna), little air, and less time. Their safety ladders were incomplete and unusable, and the company that put them down there was unsympathetic. Banderas is Mario Sepúlveda, the default leader of the group, the spiritual mainstay. Sepúlveda doesn’t command his men; rather, he exudes confidence and the will to survive and keep it together. He is surrounded by men of many metals: addicts, kids, hostile old men, Elvis lovers, men with children on the way, and one Bolivian. The 33 manages to keep these guys from archetype, always remembering that these were survivors and lucky ones at that. Bureaucrats, technical issues, and all the details of the incident give way to the people in the mine.

From a storytelling standpoint, this is stock romantic disaster. Someone at the beginning always states very clearly (to deaf ears) that the mine will collapse. That inclement weather is coming. That the ship will sink. Perhaps the film’s biggest sins are its timing, hammer-headed themes of hope, and foregone conclusions. While those men were in the mine for 69 days, it only took producer Mike Medavoy nine months to get every last one of the Chileans to sign and agree to have their life stories be told onscreen. And let’s not forget the debatable and irksome practice of studio white-washing. Gabriel Byrne plays a gruff Chilean engineer, poorly, although Juliette Binoche is divine as the rambunctious, hard-hitting, tamale-selling sister of a miner. The practice has its gives and takes.

So Riggen digs deep elsewhere. She taps into a rich vein of humanity. This is a film of warmth and idealistic honesty, reminding people that survival in this situation was nothing short of a miracle. Banderas plays Sepúlveda with inner turmoil and worry over whether or not he can remain composed. And Binoche, along with Rodrigo Santoro as a political aide, take well-intentioned and spirited “types” and turn them into people who give a damn about the disaster. In turn, so does the viewer. Hope is a powerful quality in a film when done with sincerity, and The 33’s actors get that.

The 33 is an exceptionally well-produced film. It boasts stark, minimal CGI recreations of the mine, creative lighting amidst darkness, a certain tonal lightness despite the very literal heaviness hanging over everyone, and of course, a rousing, posthumous score from James Horner that rescues this film from treacle and trite.