The pop renegade kicks off her tour with balloons, puppy dogs, and fake breasts 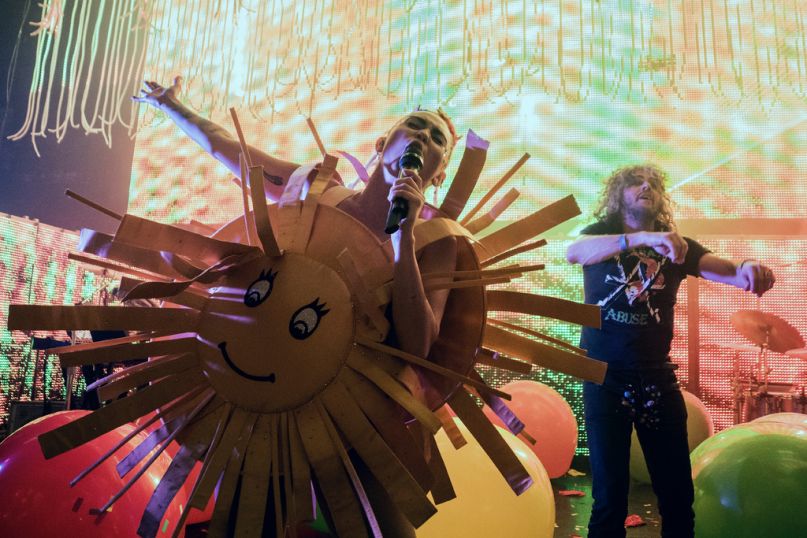 Here’s the secret of Miley Cyrus’ present run of intimate shows, backed by her band the Dead Petz, that kicked off in Chicago on Thursday night: It’s actually a massive arena pop gig jammed into the smaller confines of a couple-thousand seat theater. Cyrus doesn’t truck in subtly, and even in the smaller space, the amount of effort that she and her production crew expend to keep your eyes locked onto the stage is enormous. It’s not just a musical showcase, it’s a full-on experience.

Before Cyrus even made an appearance, the attention of the crowd was kept rapt by a stunning hour-long opening set from electronic wizard Dan Deacon. A little over 30 minutes later and a trio of ornately clad dancers decked out in black and gold extended the festivities and wowed the audience with a number of diving splits. Once they departed, Wayne Coyne of the Flaming Lips, the bandleader of the Dead Petz and Cyrus’ foil throughout the show, ambled onto the stage, clad in a simple black shirt emblazoned with the phrase “Verbal Abuse” in addition to black jeans with what appeared to be a bejeweled codpiece.

Moments later, the two-story high LED screen lit up with a mélange of fantastic swirling colors and the band began playing the opening strains to Cyrus’ earlier hit “Party in the U.S.A.”. The singer then made her entrance to massive applause, clad in a silver outfit with the letters D and O emblazoned on the front, waved the band off, and let it rip on the first single from her latest record, “Dooo It!”. To her right, she was flanked by a figure in a skeleton-adorned sumo suit, and to her left, a number of the dancers from earlier. Everyone, Coyne included, was throwing oversized silver balloons that read “Do It” into the crowd. The abrupt shift in song choice was a real eye-opener and to anyone going into the evening wishing that Cyrus would dig into some of her earlier material almost certainly went home dissatisfied as the near-two-hour long set was made up of tracks off of Miley Cyrus And Her Dead Petz.

The singer wasted little time lingering on that first song and almost immediately moved onto the next, “Love Money Party”, in which she throttled down even harder on the senses-obliterating production by setting off four different confetti cannons and bringing out another two dozen gigantic multi-colored balloons that were again tossed into the crowd. The air was so thick with swirling bits of paper and plastic that you could hardly make out any of the figures onstage. By the third number, “1 Sun”, a gyrating array of lasers were introduced as Cyrus herself cavorted around the stage clad in a yellow sun costume that she later changed out of in favor of a moon getup.

There actually came a moment mid-set when it all got to be too much. For the performance of “Tiger Dreams”, Cyrus returned wearing an outfit made of reflective mirrors and danced and sang in front of a gigantic eight-foot-wide disco ball that descended from the rafters, all while a truly massive amount of smoke was pumped into the room and a number of strobe lights went off to enhance the stomach-turning effect. By song’s end, a number of people in the general admission area had passed out and had to be physically picked up off the floor and carried away by some of the security personnel. Cyrus wisely ended that song a bit prematurely and gave those up front the opportunity to assist anyone in need and actually seemed a little shaken over the next two numbers “Pablow the Blowfish” and “Twinkle Song”, which she performed while seated at a grand piano.

But lest you think that it was all stunning visuals, balloons, and puppy dogs – that’s right, there was a moment when Cyrus actually brought a real life puppy onto the stage – you must remember that this is Miley Cyrus we’re talking about and there were a multitude of hyper-sexualized moments during the show that made you look around at some of the younger members of her audience and cringe. Like when she performed “Bang Me Box” and got down on her hands and knees to rip dollar bills out of the hands of some of the members of the front row with her teeth. Or during the strip tease that she performed from inside of a cage made of ropes of LED lights while singing “Fweaky”. Or during the final three songs of the set when she came out clad in a bra that resembled fake breasts, a horse’s mane, a glittery purple wig, and a gigantic 18-inch prosthetic penis with a glowing red set of balls. If it was her desire to shock, she certainly left a number of people with the jaws on the floor with that last outfit.

Many might consider this show the ultimate example of style over substance, but that really misses the point. Yes, it’s Cyrus’ goal to overwhelm the senses in every possible way, but she also has an innate level of talent and charisma that, in a number of moments, completely transcended the massive amount production at work around her. The highlight of the entire show came when she abandoned all instrumentation, and stood at the front of the stage alone, absolutely shredding her vocal chords into ribbons for an a capella rendition of “Twinkle Song”. It was a real moment, and a reminder that while she might be considered an entertainer first, she’s really singer at heart.