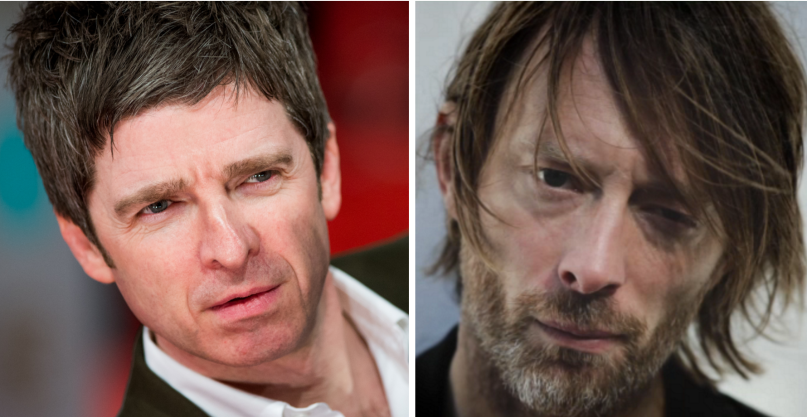 Oasis and Radiohead rose through the ranks together in the ’90s, but over the last half decade, their careers have taken opposite trajectories. The former broke up in 2009, and while its two found members have worked tirelessly launching their own solo projects, all anyone wants to talk about is an Oasis reunion. The latter, meanwhile, not only remains active, but is arguably the most celebrated band in all of music. So you can understand why Noel Gallagher isn’t among those eagerly awaiting Radiohead’s ninth studio album.

In an interview with Esquire UK, Gallagher was asked if he was “aware” of the hierarchy of UK bands. He responded, “I’m aware that Radiohead have never had a fucking bad review. I reckon if Thom Yorke fucking shit into a light bulb and started blowing it like an empty beer bottle it’d probably get 9 out of 10 in fucking Mojo. I’m aware of that.”

Later, when discussing the backstory of “Don’t Look Back in Anger” and its subsequent legacy, Gallagher took another shot at the Radiohead frontman. “Technically, there’s better songwriters than I am. Guardian writers will tell you that. Have other people’s songs ever really touched a generation, though? Radiohead? When do people listen to them? Is it when they go out, or is it when they come in? Because I’m struggling to think.”

He continued, “Look, as soon as Thom Yorke writes a song as good as fucking ‘Mony Mony’, give us a fucking shout. Me and my missus, we were at the Coachella festival a couple of years ago and Radiohead were headlining. We were like, ‘Right, let’s give them one more chance. Let’s go and see them.’ Beautiful, sunny night. We walked out through the crowd as they came on, and they were playing this post-techno: ‘de-de de de.’ We were a bit pissed. Fucking great. And then he started singing. No. Not for us. We’re party people.”

Gallagher’s criticism wasn’t just reserved for Radiohead, however. He also called out the “new generation of rock stars” including Arctic Monkeys’ Alex Turner and Royal Blood. “They’ve got the fucking skinny jeans and the boots, and all that eyeliner. I’ve got a cat that’s more rock ‘n’ roll than all of them put together. Pigeons? Rips their fucking heads off.”

“I go back to this: Fame is fucking wasted on these people. The new generation of rock stars, when have they ever said anything that made you laugh? When have they ever said anything you remember? People say, ‘They’re interesting.’ Interesting! That’s a word that’s crept in to music: ‘Yeah, man. Have you heard the new Skrillex record?’ ‘No.’ ‘Yeah, man. It’s really interesting.’ I don’t want interesting! Rock ‘n’ roll’s not about that. To me, it’s about fucking utter gobshites just being fucking headcases. Well, not headcases. But what I want, genuinely, is somebody with a fucking drug habit, who’s not Pete Doherty. Do you know what I mean?”