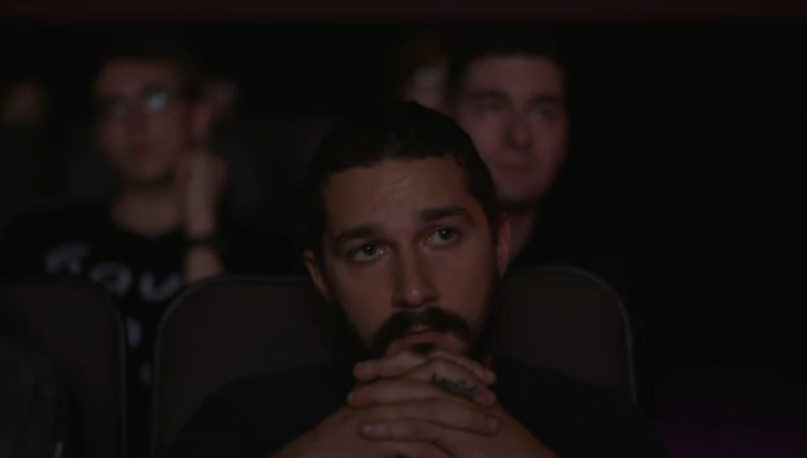 Shia LaBeouf is a purveyor of all forms of art, however eccentric, unexpected, or misunderstood. Take that time he attended a red carpet event in Berlin with a paper bag over his head, or that day a shirtless LaBuff and his strange ponytail engaged in a freestyle rap session in the middle of a park. The latest piece of art the Transformers actor is paying homage to? His own.

As EW.com points out, LaBeouf has set up camp at New York’s Angelika Film Center, which will be screening each and every one of his films for the next three days, from 2003’s The Even Stevens Movie, to 2013’s Nymphomaniac, to this year’s Man Down. The movie marathon, which started this afternoon and is dubbed #ALLMYMOVIES, will take place without interruption, only stopping for 10-minute breaks in between films.

If LaBeouf’s attendance sounds a little too bizarre to be true, the project’s website is actually streaming footage of the actor as he laughs, pensively reflects, and smiles while sitting amongst other audience members. It’s magically meta stuff, so head here to watch. And if you’re in the Big Apple, #ALLMYMOVIES is free and open to the public, so go say “hi” to Even Stevens in the flesh.

For more of this LaBeouf film experience, the actor has spent the last few days tweeting random lines from a number of his films.

my brother Forrest once said nothing can kill us, we can't never die

my name’s Dito, I’m gonna leave everybody in this film