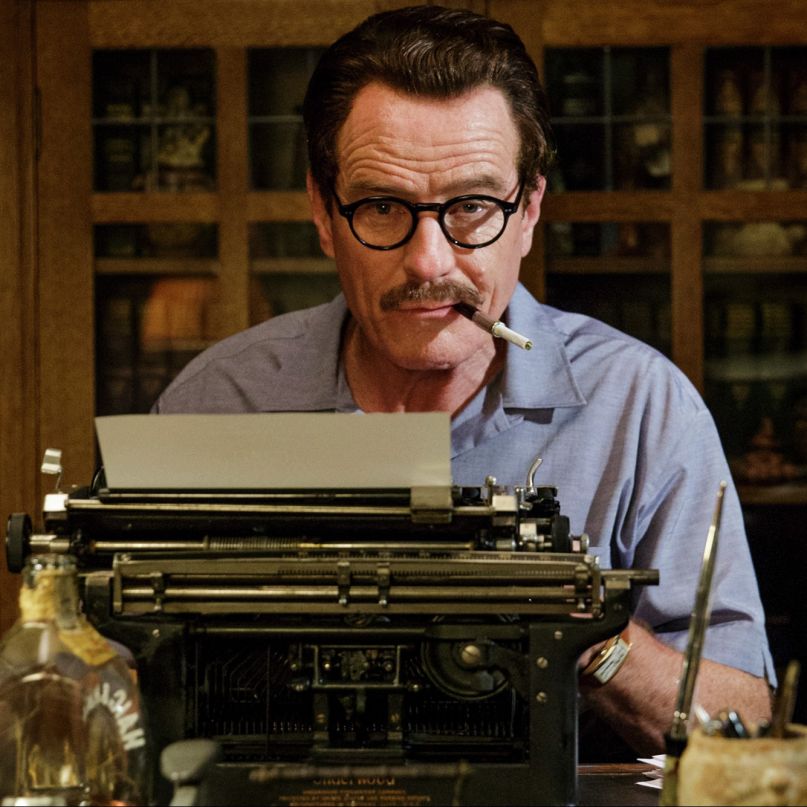 Note: This review was originally published back in September 2015 as part of our coverage for the Toronto International Film Festival.

Dalton Trumbo, the titular subject of Jay Roach’s new historical Hollywood biopic, was an excellent writer. The novelist and screenwriter – and registered member of the American Communist Party – managed to pen one of the most haunting anti-war tomes of all time (Johnny Got His Gun, which inspired, among other things, Metallica’s “One” video), write a stunning number of celebrated scripts (Spartacus, Exodus, Papillon), fix even more, and win two Oscars for his efforts (for Roman Holiday and The Brave One, both written under fronts or pseudonyms and officially recognized by the Academy as Trumbo’s in the post-blacklist era). So it’s a shame that the film about his life often feels less like a worthy tribute than something that would have benefited from his substantial rewriting skills.

The characters are introduced in the broadest of strokes. In 1947, Trumbo (Bryan Cranston) is a cantankerous but lovable and principled writer who actively participates in the Communist party and shares their ideals. He even charmingly explains the ideology to his young daughter Nikola (played in her later years by Elle Fanning) with a metaphor about sharing sandwiches at school. His wife Cleo (Diane Lane) is supportive. His friends and fellow writers, like Ian McLellan Hunter (Alan Tudyk) and Arlen Hird (Louis C.K.) are clever and quippy.

The purveyors of anti-communist sentiment both in Hollywood – where gossip columnist Hedda Hopper (Helen Mirren) and John Wayne (David James Elliott) campaign to blacklist communist and known associates from the film industry – and Washington – where J. Parnell Thomas (James DuMont) chairs the House Committee of Un-American Activities (HCUAA) – might as well be cartoon villains.

The battle between Trumbo and McCarthyism is hardly a polarizing issue these days – there are few who would argue that the red panic-fueled political witch hunt that cost some of Hollywood’s best and brightest their livelihoods (and sometimes their lives) is anything but a blight on American history. And yet the scenes leading up to Trumbo’s time in front of the HCUAA, and his imprisonment for contempt of Congress for refusing to answer the committee’s questions feel too simplistic a battle between white and black knights to carry the weight of the drama that Trumbo aspires to be.

Perhaps this is why the film’s more playful middle is so much more promising. Free from most of the proselytizing of the first act, Trumbo settles into an almost caper-esque tone. Home from prison and in need of work, Trumbo takes his writing to the black market, penning scripts under a series of pseudonyms for a pair of schlocky producers (John Goodman and Stephen Root) and finding similar work for his fellow blacklistees. With dialogue almost as snappy and effervescent as the jazzy score, Trumbo and crew subvert and foil the enemy. The mix of drama and humor works well here and comedic backgrounds of many of Trumbo’s stars becomes an incredible asset, adding almost perfect timing to many a line-reading. The severity of the circumstances facing the men and their families is never downplayed, but the Important Issues at play no longer feel so heavy-handed.

As the film climbs toward its conclusion, though, Roach and screenwriter John McNamara are once again openly striving for prestige drama. They’re more successful here than at the beginning of the film, but not all of the emotional, soul-searching beats and fights between Trumbo and his family are effective. At their best, they add a moral ambiguity to the biopic: Was Trumbo really a Hollywood hero, or was he one man with a personal agenda that happened to coincide with doing the right thing? And at what cost? The weaker moments often feel like emote-by-numbers monologues written specifically for the Oscar reel. And the uneven writing robs Trumbo’s final speech of its deserved resonance.

At a moment of great triumph and deep reflection, you just might find your mind wandering and wondering what Trumbo would have had to say about the writing, and how he might have fixed it.