Visualizing Resistance: How Hip-Hop Videos Use Surrealism as a Protest Tactic 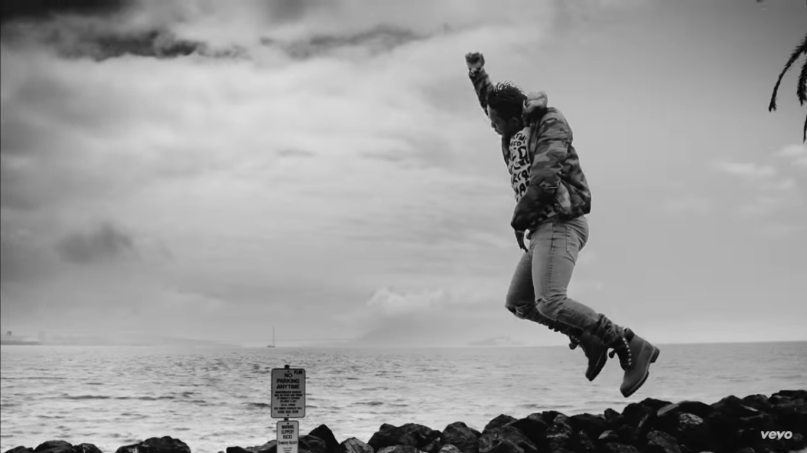 There’s something so important about Kendrick Lamar’s song “Alright”. “Alls my life I has to fight,” he says, vexed. At face value, this line could be a testament to his internal struggles with depression or the physical struggles of growing up in the bleak conditions of Compton. But it could also be symbolic of the communal black experience of fighting against oppressive political and social structures.

With the rise of the #BlackLivesMatter movement, protest has transcended geographical limitations. It’s now accessible through the click of a “like” button, the sharing of a tweet, or the post of a Facebook status. Activists and writers like Zellie Imani, Johnette Elzie, and Deray McKesson have become formidable online presences, revealing and speaking out against injustices in Ferguson, Baltimore, and around the country.

Protest against oppressive and supremacist power has always been tied to hip-hop. During the late ‘80s and early ‘90s in the midst of the gang-sweep era, the Los Angeles Police Department could indiscriminately detain individuals who appeared to be gang-affiliated. In response, artists like N.W.A and Public Enemy voiced their dissent by making some of hip-hop’s greatest albums. Straight Outta Compton and Fear of a Black Planet explicitly confronted anti-blackness and found power from the margins.

It’s been decades since that era of hip-hop, but the present eerily mirrors the past. In the last few years, the deaths of Trayvon Martin, Mike Brown, Tamir Rice, and Eric Garner have sparked a national conversation on police brutality, racial profiling, and the mass incarceration of black people. It should come as no surprise that hip-hop artists like Run the Jewels, Kendrick Lamar, and Vince Staples have taken a more political stance in their music. But the medium by which they communicate their protest has gone beyond their lyrics alone – it now manifests most vividly in their music videos. These videos go beyond typical political rhetoric, turning to surrealistic displays that expound on the complexities of the black experience.

Joey Bada$$, the nostalgic golden-era rapper, hasn’t been afraid to voice his discontent on police brutality. But on his single “Like Me”, Joey offers a message of optimism despite the oppression he faces. “I pray there’s hope for a nigga like me,” Joey says, even when he sees “blacks get their ass sprayed just for makin’ a move.” The music video for the track mirrors both his frustration and his hope. Throughout the video, Bada$$ is portrayed as the kid who was in the wrong place at the wrong time. After witnessing the death of another man, he tries to avoid the police, but gets shot himself in the process.

“Joey wanted to focus on how all sorts of people are affected by violence,” director Nathan Smith told Consequence of Sound. “Regardless if you’re good or bad, or of your socioeconomic position, everyone is affected by it.” After his death, Joey comes back to life and revives others who have also been shot dead — including stand-ins for Trayvon Martin and Michael Brown — with a single touch. “We wanted there to be a message of hope,” said Smith. “It is symbolic of spreading love, not hate.”

On his album To Pimp a Butterfly, Lamar battles mental health issues as he tries to make sense of the world that sells him as a commodity and where systemic policing and judicial inequality is normalized. The single “Alright” has served as an anthem of hope at multiple protests this year, as protestors in Cleveland and other cities have been filmed chanting the chorus: “We gon’ be alright.”

The song’s music video plays out like a dream. Lamar floats across the city, symbolizing a hero in a troubled world. “When Kendrick’s floating through the city, that’s him being … something these kids can aspire towards,” director Colin Tilley told MTV. “Like a superhero.” But just like Joey Bada$$, Lamar is also shot down. His power is suddenly ripped away, and he turns into a victim when a cop shoots him down with a pistol gesture of his hand. Tilley echoes Smith’s sentiments on his directorial choices: “It shows that, at the end of the day, we’re all human and that nobody’s untouchable.”

Also a California native, burgeoning rapper Vince Staples has spoken on the blighted condition of urban life in his home state. His music video for “Senorita” depicts a city where massive machine guns loom over a hyper-militarized neighborhood, where people are shot and left for dead on the streets. The neighborhood is filled with exaggerated caricatures of pimps, record label executives, and prostitutes that populate Staples’ world. At the end of the video, a white family gazes into the violence from behind glass. “I wanted there to be an element where the characters are a product of the outside gaze,” said director Ian Pons Jewell. “The family peering into Vince’s world has no experience of living in it.”

Visually, “Senorita” functions as a critique of how mainstream culture consumes black culture with no concern for or investment in rectifying the injustices that affect black communities. “There’s meant to be this feeling of people looking for a source of entertainment, “ said Jewell. “It’s like they are peering into this human-like zoo.” The disparity between the white family and the people in Vince’s world is emblematic of the political and social issues that plague the US today: White America gazes into the black experience, entertained, informed, but ultimately safe. Staples echoed similar sentiments on Rap Genius: “People don’t care about what’s happening in Long Beach, or Compton or Watts,” he wrote in his commentary on “Senorita”. “When they look at these people, they don’t see themselves.”

Run the Jewels’ video for “Close Your Eyes (And Count to Fuck)” visualizes a stark antithesis to Staples’ “Senorita” gawkers. A white cop and a black man seem to have already been engaged in an un-winnable battle, as both become confused, clumsy, and exhausted over the course of the video. There is no context or solution to their violence. “How many times have you seen this on the news, and when is there an appropriate amount of context?” asked director A.G. Rojas. “These situations are complex, and there never seems to be a real solution, which I think causes a lot of people to feel indignant at times.”

All these videos address anti-black violence, but why do they all turn to surrealism? Surrealism and the fantastical have long been modes of expression for black musicians and writers alike. N.W.A often used to describe themselves as brutes, invincible to the police: “A young nigga on the warpath/ And when I’m finished, it’s gonna be a bloodbath,” raps Ice Cube in “Fuck tha Police”. His fantasy continues in a long literary tradition of black surrealism and magical realism. In the late ‘70s, writers Richard Wright and Amiri Bakara employed surrealism in their works Native Son and “Black Art”, respectively; in 1988, author Toni Morrison won the Pulitzer Prize for her magic realist novel Beloved. Surrealism enables artists to transcend reality, to extrapolate on the world we live in now and to imagine a better one.

With the help of talented directors, more hip-hop artists are subscribing to the use of surrealism. “Hip-hop is where directors definitely have the ability to make bolder and bigger statements without necessarily imposing a forced message,” said Rojas. “You already know the context where that artist is coming from and their experience through their lyrics.”

Surrealism as a means of protest allows artists to go beyond the confines of the present, to transcend the current paradigms of racism, sexism, and classism. Lamar’s rallying cry, Staples’ blunt satire, and Bada$$’s prayer for hope can all be read as forms of protest; they decry the injustices that afflict their communities, but they also imagine how blackness can triumph over institutionalized racism and police brutality. In these worlds, the dead don’t need to stay dead, and power can be fluid. “It’s important to create something that is pertinent to the hip-hop community,” said Smith. “You need to visually bring these concepts to life and make the audience feel every ounce of the performance.”

In the video for Flying Lotus’ “Never Catch Me” (which also features Kendrick Lamar), two young kids come back to life at their own funeral, happy and liberated from the troubles of the world. They are dead and alive at the same time, mourned and celebrated, gone and yet undeniably present. The fantasy possible within music videos allows the black experience to be as paradoxical and unresolved as it often feels. As my friend Sequoia Maner put it: “Blackness circulates as both power and victimhood, entertainment and criminality, policed and liberated simultaneously.”

More than just entertainment, this new wave of hip-hop videos has taken up the mantle of protest literature – and the musicians and directors carrying it out are more than up to the task. “It’s up to us, as directors, to take responsibility for the images that we put out,” said Rojas. “We need to challenge people and to make people question what’s going on in the world.”