Erykah Badu – But You Caint Use My Phone 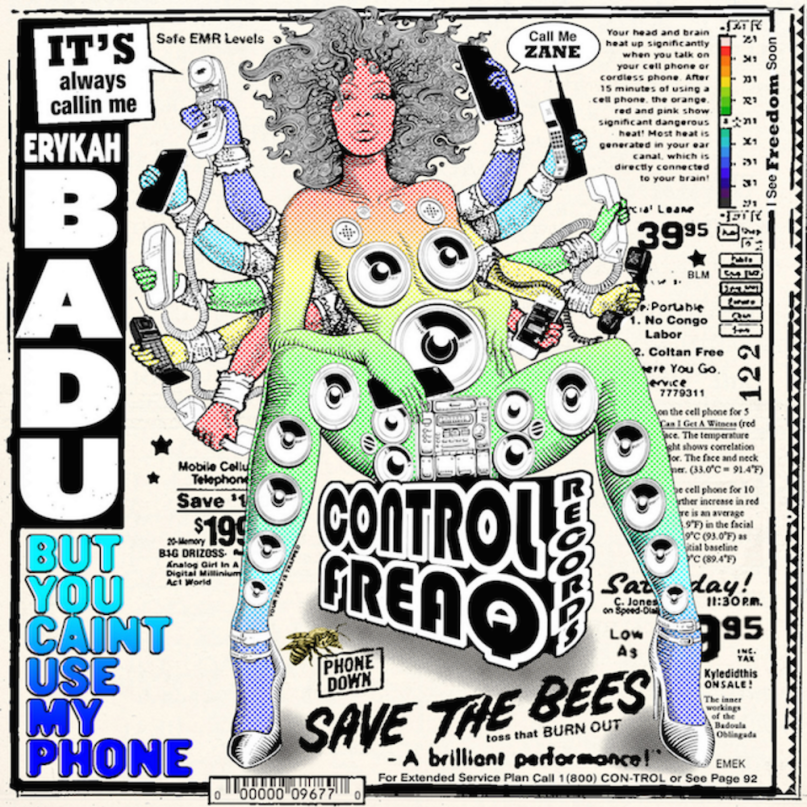 It’s been five years too long since we last heard from Erykah Badu. 2010 saw the release of the galactic dystopia New Amerykah Part Two (Return of the Ankh), so it’s weird and a little unexpected to hear new music in the form of a mixtape. Her albums seem calculated and intentional, boasting some of the best in funk and soul instrumentation. Yet But You Caint Use My Phone offers a breath of fresh air that finds power through simplicity and spontaneity.

Coming out only a few months after Badu’s remix of Drake’s pop culture contagion “Hotline Bling”, But You Caint Use My Phone takes root in a specific place and time as she references her frustration and intrigue with communication in the 21st century. Badu recognizes that phones, while an extension of ourselves and a conduit for our relationships, offer little meaning in themselves. In “Phone Down”, Badu echoes the complaints we’ve all had when our date is incessantly checking their phone — “I can make you put your phone down/ Leave it at the crib guarantee you wouldn’t miss it,” — while in “I’ll Call You Back”, she shares our thoughts on the expediency and practicality phones provide: “Running around in the city, I’m running I like it, I’m busy so I’ll call you back.”

While Badu still employs smooth R&B and cool watercolor jazz reminiscent of hits like “On and On” and “Didn’t Cha Know”, she’s at her most spontaneous and improvisational in But You Caint Use My Phone. Created in just 12 days with Dallas producer Zach Witness, the mixtape feels impromptu throughout, like the jovial prank hotline in “Cel-U-Lar Device” (“If you’re calling to ask for some free tickets in a city near you and know she don’t really fuck with you like that? Press 7”). Other moments — like the spaceball oddity of “Dial’Afreaq”, ItsRoutine’s impressive Drake impersonation in “U Used to Call Me”, and scattered “squirrel” references in the Andre 3000-assisted “Hello” — enhance Badu’s witty, off-the-cuff disposition. And much like in her past works, Badu continues to be a complex and three-dimensional character, shifting from a robotic android consumed by technology to a lover longing for intimacy free from cellphones.

Given its nebulous sound and Badu’s tongue-in-cheek wordplay, the mixtape makes for an easy and enjoyable listen that doesn’t need to be taken too seriously. In typical Badu fashion, she continues to employ a good amount of mystique as she takes her own spin on her muses. But this time she isn’t channeling the socio-political fodder of funk gods Sly and the Family Stone or soul savant Stevie Wonder. As the ultra-modern “Hotline Bling” remains at the core of the mixtape, so do her new influences. Besides the Isley Brother’s inspired “Hello”, Badu opts to give her take on more contemporary artists: R&B maestro Usher, in her own rendition of “U Don’t Have to Call”, and the languid melody of Post Malone’s “White Iverson” in “I’ll Call U Back”.

Drake and Badu’s friendship is an interesting one. Badu has said that she considers the ubiquitous rapper like family: “That’s my brother,” Badu told The Fader. “He’s an inspiration to me.” Meanwhile, Drake shared his own encounter with the soul queen in “Days in the East”: “Remember one night I went to Erykah Badu house … We talked about love and what life could really be for me.” At first glance, the two may seem like an unlikely pair, but both artists boast an unparalleled candor throughout their catalog. On But You Caint Use My Phone, Badu achieves an intimacy and warmth that makes you feel that it’s best to bare your emotions on your sleeve.