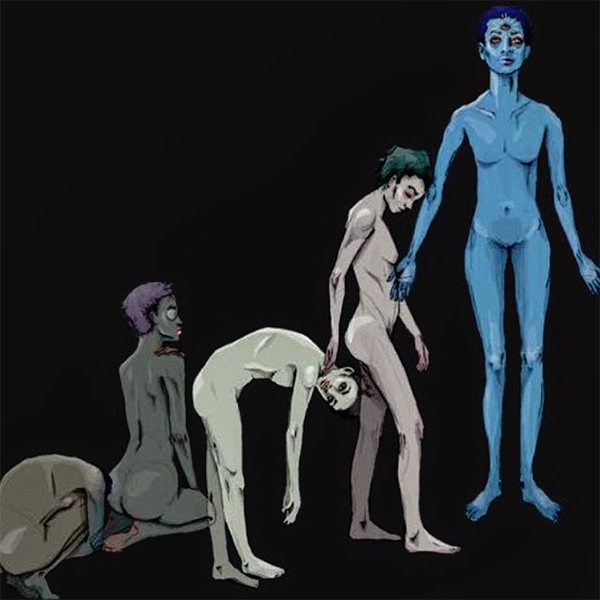 “I am just a teenager/ But I feel angrier than a swarm of hornets,” Willow Smith sings on the opening track to her surprise debut album Ardipithecus. The line acts as a healthy reminder that yes, she’s a teen, and a young one at that — after working on the record over the past year, she’s only now turned 15 years old. Her older brother, Jaden, somehow is only 17. It feels like the progeny of Will and Jada must be older. They’ve been making headlines for years, and “Whip My Hair” came out ages ago. They tweet and speak in interviews with the self-assured, grandiose nature of someone who’s been practicing it for decades. But no, I double-checked: 15. That said, you don’t need hit up Wikipedia to verify Willow’s young age: Take one listen to Ardipithecus, and the star’s burgeoning teenage angst, inconsistent experimentation, and “discovery” of well-trod metaphysical experimentations all readily reveal her youth.

Anyone who’s taken an intro to philosophy class with a hippie or gotten especially high with some “free thinkers” will recognize the kind of lyrics that predominate here. There are references to crystals and third eyes, ultra-confident assessments of where the generation is going wrong, hodgepodges of old-sounding words to justify all this knowledge: hither, Akashic, obelisk. None of them really mean anything in particular (unless, perhaps, you have the special Smith spiritual knowledge); instead, they’re just there to gesture at cred. Like a room packed to the brim with knick-knacks and trinkets, the at times solid bones of the songs are so cluttered with signposts of other things that you can’t appreciate their structural integrity.

According to FADER, Smith is the sole songwriter on 14 of the 15 tracks, even producing 10 of them herself. Commenters all over the Internet are doubting that, but that skepticism doesn’t make much sense. Nothing about the Smith kids’ personal brands smacks of, well, branding. They do crazy shit all the time, and subsequently get criticized or mocked. They’re not being marketed for mass audiences (at least not since “Whip My Hair”); they’re just being their absolute wackadoo selves — more power to them. Why would that suddenly change? Why, after years of unabashedly stating her personal beliefs, would Willow let someone else dictate her debut? Like her or not, she’s a kid with creative forces for parents, tons of resources, and seemingly total free rein. That kind of kid will do what they want to do. While her lyrics may be goofy or even overbearing, they further suggest this is a personal statement. Why would anyone be coaching her to sing about Adventure Time characters (“Marceline”), inhabiting the divine (“Star”), or dropping lines in Na’vi (“Wait a Minute!”).

Musically, Smith makes some strong, interesting choices. She’s no longer making earworm pop or trying to rap, instead exploring an ethereal intersection of alt R&B and experimental pop. Sure, she’s singing silly lines like “I am the oldest one/ But up in my mind and not in real time,” on “Organization & Classification”, but she does so there in a voice that’s part Björk-lite, part slam poet over a beat that seems to come in part from a blacksmith striking an iron. “Natives of the Windy Forest”, meanwhile, recalls Yeasayer in its twitchy percussion, chanting, and skittering world music flourishes. The empty-set clicking of “Marceline” gives her plenty of room to show off developing range and atmospheric falsetto backing vocals. The bass drum on “Cycles” kicks, and the slinky synth sounds Radiohead-indebted, her repeated notes about “howling” with the kids totally enchanting.

But the lyrical clunkers really can’t be ignored, no matter her interesting delivery or production choices. Eleven lines on “Not So Different” end with the word “thing,” as if, like “orange,” it rhymed with nothing else. “You make me feel like a cloud of H2O,” she sings on the Muse-y “RANDOMSONG”. She also calls herself “all-creating” and offers to “call your dorm room right from my labradorite” (which, apparently, is a crystal that helps with “manifestation”). Between flying, buckling up, getting from A to B, and going for a bumpy ride, “Waves of Nature” feels like a jumbled grab-bag of transitional cliches. “That’s why I’m surfing over reefs/ That’s why I’m sleeping under tepees/ With my native culture,” she adds on “dRuGz”, elsewhere noting her crystal-aided ability to see through trees via touch (because “they are fractals of me,” of course).

“Oh we’re not so different,” Smith repeats midway through the album. But yes, Willow, we are. So much of Ardipithecus is impenetrable, even distancing. The album is a headscratcher, one that shows plenty of promise but also a personality abstruse to the point of mystification. Willow Smith is clearly capable of producing great music. Maybe I need to catch up with the philosophy she’s throwing down, educate myself on chemtrails, crystals, and vortexes. Or maybe she’ll figure out a way to make her message more approachable. Maybe we’ll meet in the middle. Or maybe Ardipithecus is exactly what she wants to make, to cultivate a niche audience that digs the oddball New Age messages and doesn’t want them to make a ton of sense.