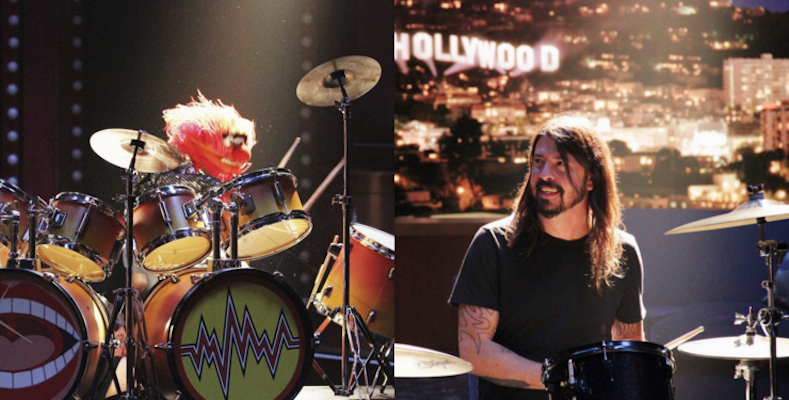 TV has brought us classic drum battles before, like the world-shattering contest between Will Ferrell and Red Hot Chili Peppers’ Chad Smith. (Where you at, Lars Ulrich?) But no duel of drumming demigods has built years of anticipation quite like what went down on this week’s episode of The Muppets. Dave Grohl sat in with Miss Piggy’s house band, the Electric Mayhem, on Up Late with Miss Piggy, but the real action came post-show, as the Foo Fighter stuck around to face off against his long-time nemesis, Animal.

On a dark set during the credits, Grohl and the mangy Muppet went snare for snare, cymbal for cymbal in a raucous round of rhythmic rivalry. “Oh what’s that? A bell?” Grohl asked after his first cymbal tap. “Time for school!” From there, it was on, as the pair pummeled their respective kits, losing control and eventually knocking every piece of equipment to the ground. Who gave in first and declared the other the winner? Watch below to find out.

The battle was part of episode nine of The Muppets, which actually doesn’t air on ABC until this evening. However, it already premiered in Canada, hence the clip surfacing online. The episode also featured Joseph Gordon-Levitt singing a duet with Miss Piggy and playing cards with the other Muppets. You can watch the full episode tonight at 9 p.m. ET/8 p.m. CT.