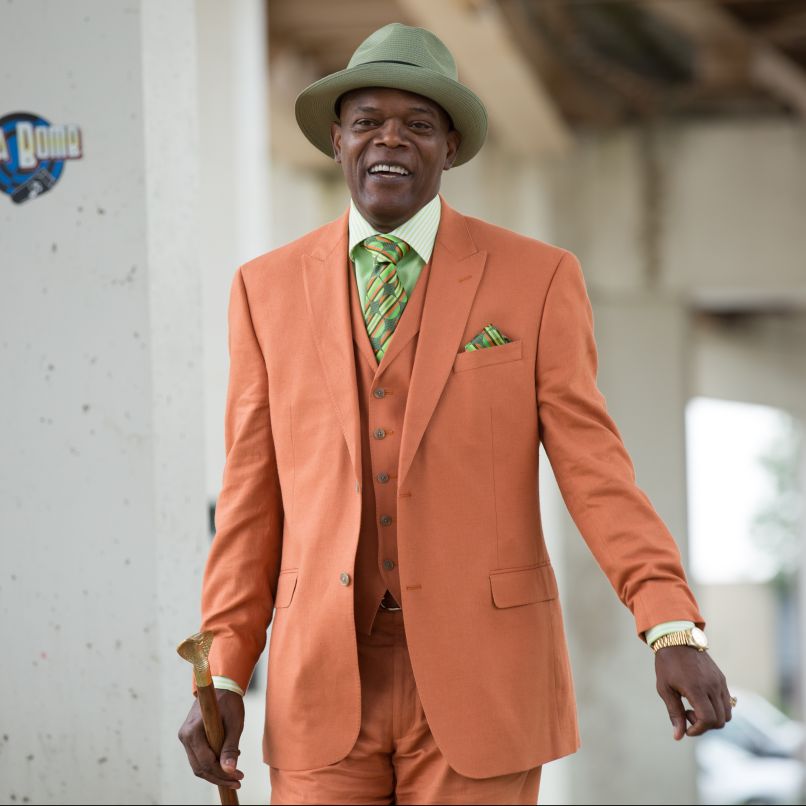 The film comes on stronger than strong, starting with some basic numbers. From 2001 to 2015, Chicago has seen 7,356 gun-related deaths. Comparisons show that the number slain is outpacing the casualty totals in wars abroad, like in Iraq. The count is part of these Saul Bass-like opening credits. There’s a map of the United States made of automatic rifles colored red, white, and blue. Then, blood-red Helvetica text takes the screen, punching lyrics for a new song from Nick Cannon, “Pray 4 My City.” The tune’s about the sad state of affairs, and plays in its entirety. The rap goes:

Pointed. Powerful. Yet would you believe that right after this, we’re immediately introduced to a stylish, cane-wielding Samuel L. Jackson walking under Chicago’s “L” tracks, addressing the camera in rhyme like a trash-talking Greek chorus? Spike Lee’s got your attention now, doesn’t he?

Chi-Raq works harder than hell to address a very real issue. It looks at a watershed moment in modern history and screams in disbelief and agony. But even more striking is how the film laughs, loudly, at the gun crisis as well. Chi-Raq has it both ways. Polemical, hysterical, this is total-impact filmmaking from a master working to tell an attention-grabbing story, refusing to stop shouting from atop his unconventional soapbox.

(Read: An Introduction to Spike Lee in Five Films)

Chi-Raq is Aristophanes’ Lysistrata, the ancient comedy about her one-woman mission to end the Peloponnesian War. Her weapon? Abstinence. Transplanted to 2015, Lysistrata (the intense, glowing Teyonah Parris) is an orphaned, beautiful young woman on the South Side of Chicago. She is Demetrius … sorry, Chi-Raq’s (Cannon) squeeze. Chi-Raq is a rising rap star, and also a hedonistic figurehead in gang wars. He, along with his cronies and enemies, has caused nothing but terror. The turmoil is as plain as day to those not holding a rifle. Death tolls are rising, guns aren’t being regulated, and there’s little end in sight.

She sees the agony in the community, but as if by divine intervention she comes up with her grand idea, and this is where Chi-Raq becomes deviously, deliciously, even dangerously clever: Guns are the ultimate metaphor for a man’s pride, power, and penis.

And what if a sex strike worked? What if society’s women simply refused to grant the endless warriors release until they agreed to set their weapons down?

The film giddily hypothesizes that men would devolve into primal fits. Institutions might crumble and shut down. The film even brandishes a catchy slogan to reiterate Lysistrata’s plan. “No peace. No pussy.”

Keep in mind, Chi-Raq’s not a blame game about the alleged shortcomings of the black community or the failures of bureaucracy or who might be viewed as accomplices to crime. Well, to some degree it’s also about all that, in a different manner: a wildly gender-centric joke that touches on a hard-to-fathom scenario with a cheeky through-line.

Lysistrata is the seed for a battlefield of expertly staged scenes and considerations: prayers, murders, sex, doggone madness. Plot is somewhat immaterial, however, as Chi-Raq escalates into a series of momentous pleas and punchlines. The film is a poetic, feisty ramble, willing to do anything as long as you listen up. And Lee never forgets what the film is trying to say: Boys, put the guns down.

Lee directs with two tones, one silly and the other solemn, and each works to their fullest potential. Functioning contrasts. Surreal yet intensely honest bloodshed over beefs on Twitter. Gunshot victims directly speak to the camera and describe their litanies of serious medical ailments. Ego and male chauvinism are euphemized time and again, without fail, through gun barrels. John Cusack’s south side preacher is initially played as curiosity, but is given real voice in his sermon. A sex showdown featuring smooth grooves and brass bedposts against Lee’s signature dolly glides becomes so epic and melodic that it may be the most memorable peace treaty ever filmed. Here’s a picture that subverts expectation at literally every turn, to become a wild, weird, even hypnotic comedy. Still, Chi-Raq is always rooted in reality.

When Lee frames Mayor Rahm Emanuel’s “Building a New Chicago” signage in the light of day, it carries every connotation that Chicago locals pick up daily: menace and hope and sarcasm and grief.

This is now Lee’s third (!) film of 2015, and the 58-year-old filmmaker is directing with all the enthusiasm and power of an NYU master’s student finding new ways to express himself. Why the satire on gun violence? Why not a hard shot like Clockers, or When the Levees Broke? Because quite simply, Chi-Raq is satire. Laughing, losing, learning, it’s full. In a journalistic era where gun violence is met with anticipation and later apathy, satire is hard to address. It may be perceived as flippant, evasive, or crass. But the genre has a power all its own, an ability to raise ire. Satire, even if it’s as offbeat and direct as Chi-Raq’s, has purpose in amplifying larger discourses. Here, Lee and co-writer Kevin Willmott want to imagine how gun violence could end. Crazy, right?

Maybe it’s hard to imagine Lysistrata’s plan going global (which it does). It’s a zanily expressed dream, but a dream totally worth imagining. Here’s the thing: it’s really not that insane when you think about it. The plot sticks because everything’s so pronounced. Chi-Raq is less a reflection than a provocation, a brilliantly devised one. But above all, it’s a targeted and breathtaking film.

Back to Lee’s two hands. On the serious side, the film is a document of an era: American hysteria for the gun problem, hitting in the heart of a city feeling it every day. In the tradition of Nelson Algren’s City on the Make, or Haskell Wexler’s Medium Cool, Spike Lee’s Chi-Raq is a bleeding, living, essential work of art about the state of Chicago, and what’s going down this very second. And on the other hand, Chi-Raq has moments of furious wit and shocking humor that allude to and even belong next to Kubrick and Southern’s Dr. Strangelove, or Kazan’s Face in the Crowd.

(Read: Does Spike Lee’s Chi-Raq Do the Right Thing?)

Chi-Raq needed to happen. Right here, right now, and in this style. When Lee buzzes “THIS IS AN EMERGENCY” over the credits, it may elicit derision, but is that untrue? Chicago’s violence is a no-bullshit emergency. The young are killing the young, the people are angry and afraid, and there’s an urgent need for peace, or a ceasefire, or a halt on gun sales, or literally anything to stop the violence. When it feels like the press just tallies the dead, as though gun violence is akin to a natural disaster, and the closest thing the city’s had in terms of creative media consideration was the conspicuously propagandistic CNN network doc about Mayor Rahm Emanuel, Chicagoland … something’s gotta give.

Now’s the time for someone with the daring of Spike Lee to shoot for the heart of the issue from a strange new angle: an outsider with concerted perspective. Solemnity is key, and Chi-Raq braves the waters, but the film’s stroke of genius is its ludicrous bent. The film swivels, and challenges us to not sit complacently. Get mad. Seriously. Think Chi-Raq’s making light? Good. Now respond to it. Think the film’s weirdly showy for a real deal? Good. Now do something. Chi-Raq’s an invitation. Chi-Raq does something in its wholly unique, too-important-to-skip way.

It is vaudeville. It is heartbreaking drama. It is potent. It is in mourning. It is beyond relevant. It fights for the city of Chicago. It despises Chicago. It hopes for Chicago. It is awake. It is alive. It is remarkable.