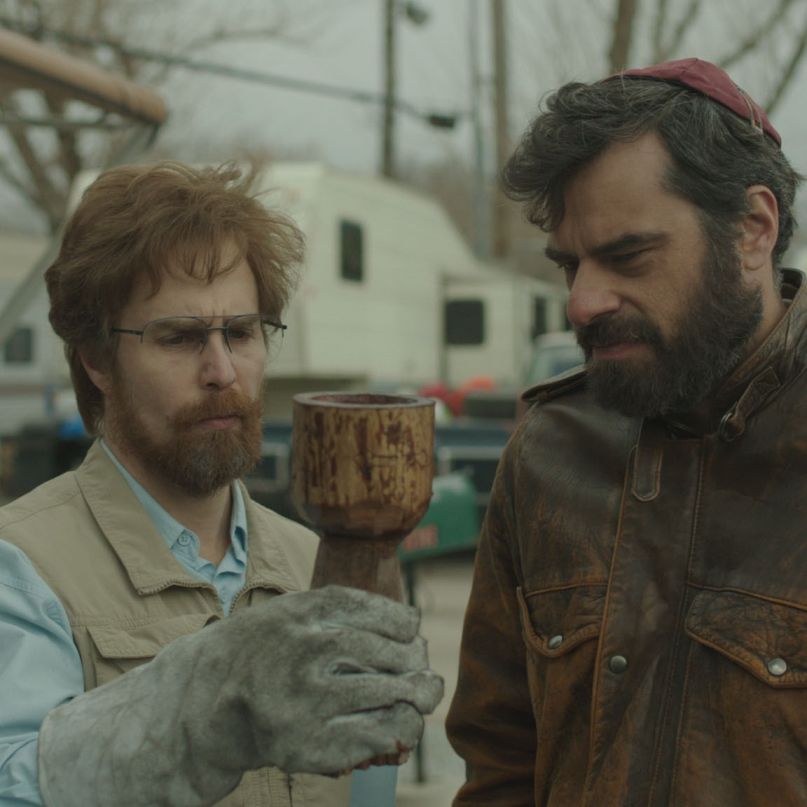 Don Verdean is the sort of comedy which presumes its own hilarity long before it gets around to telling any actual jokes, or staging anything that might otherwise be considered funny, unless you’re of the sort who finds organized religion inherently quaint, annoying, and hilarious. If you find yourself of that sensibility, then let us suggest that perhaps you try and do better in life, or at least find entertainments reflective of your worldview that’re more well-developed than Jared Hess’ latest exploration of the inherent comedic value of people who don’t and haven’t lived in cities before.

Since Napoleon Dynamite, Hess’ fixation with the strange inhabitants of flyover territories has yielded one decent comedy (Nacho Libre), and the rather terrible Gentlemen Broncos. Here, Hess and his wife/writing partner Jerusha Hess manage to find a space beneath the latter film by doubling down on the smug condescension that made that film so unpleasant, even as they claim to offer a more uplifting tale.

Don Verdean follows the adventures of the titular archaeologist (Sam Rockwell), who once made his name as an intrepid seeker of Biblical artifacts that may prove and validate the existence of a higher God. However, that was at least a decade ago, and presently Don occupies his time by lecturing the sparse handfuls of churchgoers around the country who might still want to hear his tales of recovered Christian goods. Despite the best efforts of Carol (Amy Ryan), his relentlessly positive assistant, Don seems to be falling into despair, convinced that the well has run dry. That is, until the head of a prominent and struggling local church (Danny McBride) offers Don the chance to have all his future digs bankrolled in exchange for the sort of flashy find that could revive an increasingly secular nation’s faith in Scripture.

Of course, Don is at once a true believer and a cynic profiting from devotion, so when his initial aspirations of a Holy Land dig are cut short by Israeli police, he and Boaz (Jemaine Clement), a local with knowledge of the territory, scheme to fabricate the find of the century: Goliath’s skull, still caved in by David’s slingshot. Soon Boaz becomes too acquainted with American luxury, the lie of exactly where and how Don found the skull escalates, and both find themselves desperate to maintain their fiction for the sake of spurring on a new era of faith, or failing that, keeping the money they’ve already amassed. The film crawls through its 90 minutes, drawing out every imaginable aspect of their doomed hustle for the sake of comedy that never really avails itself.

While Rockwell does unnecessarily soulful work as a false prophet who truly wants to become good and beneficial to those around him, and Ryan finds the soul in an aggressively underwritten “patient love interest” stock type (she’s so good that Carol starts to feel like a character from another, better film after a time), Don Verdean struggles under its own weight from the moment the opening VHS-tinged prologue establishes Don as the exact sort of behind-the-times analog type that the family Hess has long enjoyed prodding.

The film busies itself with assaults on easy targets, from the rubes who turn out to witness Don’s dubious findings to Leslie Bibb as McBride’s ex-stripper wife, who delivers an early hymn about the importance of blindly obeying one’s husband. If Don Verdean eventually decides to avail itself as a sincere parable about forgiveness and sin, the 95% of the film devoted almost solely to heckling religion and those taken with it seems to be unaware of this intention.

Granted, it’s not as though cults of blind devotion aren’t ripe for parody. They just warrant a better, more well-considered parody than this one. Like all of Hess’ work since his breakout 2004 hit, there’s a mean-spirited streak to Don Verdean that undercuts the film, whether it’s Clement over-exerting his way through a selfish caricature or the film’s general ethos of “everyone’s full of it,” seen through everybody from the central pair to the late-film appearance of a hoarily stereotypical Chinese millionaire with designs on the grandest Biblical find of them all.

By the time Don Verdean shifts gears from dull comedy to those of an incongruous adventure thriller and back again, the damage is already long-since done. The film exists in a universe where people living in trailers, people who dress funny, people who run churches, and people who believe in some deity or another are all hilarious weirdoes ripe for a sending-up, and it leaves an ill taste in the mouth after a time. It’s not just that Don Verdean is the sort of comedy where the laughs are few and far between, though they are and it is. It’s that it’s also an oddly cruel one as well.