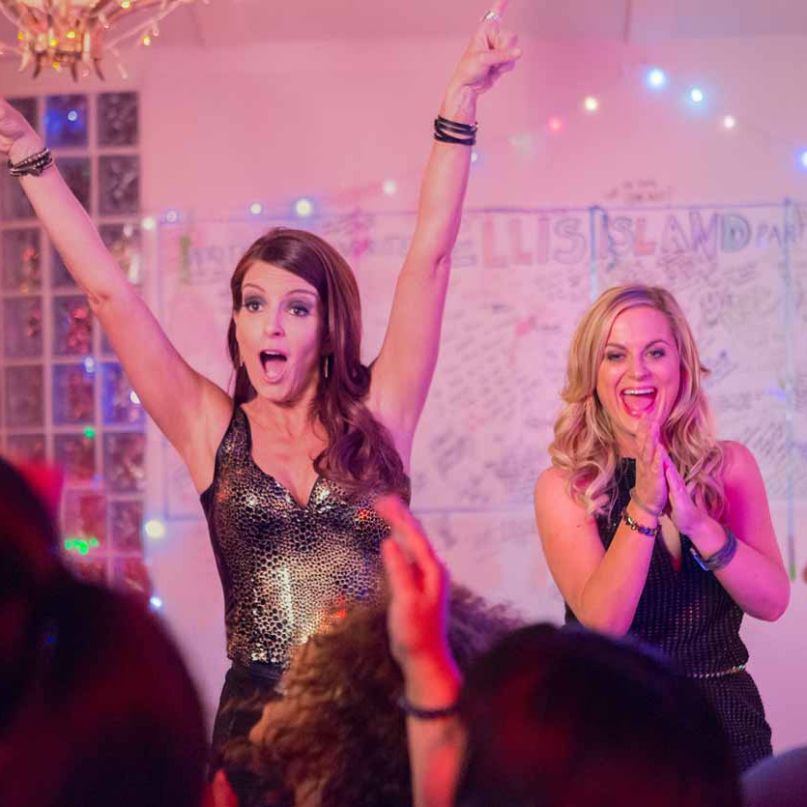 02. Amy Poehler and Tina Fey are affable and at the top of their game.

03. This film’s a big step forward from Baby Mama.

04. The movie gets going quickly, and is rarely unfunny.

05. It has pathos, affect, and a preternatural understanding of sisterhood.

06. The film’s a lot better than the lady-bro fist pumping the trailers promised.

07. This is a truly R-rated film that doesn’t push boundaries, but plays well within its framework.

08. Snow’s “Informer” may never be this special ever again.

Trust that and you’re good to go. That was a safe, succinct push that doesn’t tell you how far the leads go, or how many drugs Bobby Moynihan and John Cena consume, or what happens in the bedazzled carnival of the film’s central house party. See Sisters and laugh aloud with it.

Sisters is made of pure, frenzied comic momentum. Here’s a bra-baring blowout with a nice mix of gross-out, Hughes-ian ‘80s gags, and a lot of girly oomph on its side. This may look like a basic high-concept comedy (the single-night party movie), and it is to a point, but Sisters is among the best of its kind. This is what happens when you take two top talents like Poehler and Fey and let them play with absolute power. They work hard for the jokes in Sisters. Buddy humor. Naughty one-liners. Large-scale sight gags. Farrelly brothers-level shocks. A caring cast of comedians. Hair ties. Hammer pants. Michael J. Fox posters. Xanadu posters. Bra joke after bra joke. The film’s sense of humor works frenetically.

Sisters offers up a modern-day Oscar and Felix, a well-worn trope that Fey and Poehler wear to perfection. Poehler is Maura Ellis, a registered nurse, divorcee, and responsible younger sister. Fey is Kate, the elder, the flake, the single mom, and worst of all, the backroom hair salon plea bargainer. Maura is the kind soul, the sister with a one-eyed shelter dog and her heart on her sleeve. Kate has a history of bragging about penises and paramours in her diaries. Yet they embody that sort of opposites-attract, you-just-don’t-get-it-till-you’re-sisters kind of thing that clicks. Fey and Poehler nail the shorthand and the genuine comfort of sisters. They share war stories, cover each other’s backs, and wear vintage garb and fiddle with trophies like a Lisa Frank fantasy on Three Olives vodka.

Kate and Maura get wind of their parents selling their childhood home, and the two lost siblings make a point to have a last hurrah in their old haunt. Now, this being a party movie, things get wildly out of control. The humor alternates and escalates in a pleasingly silly way. Sisters knows the party genre better than most, and plays with the formula in clever ways. The party starts drab, with humdrum ruminations on the lameness of middle age. There’s a whole lot of insight on parenting, embarrassing health issues, and the sad state of some people’s Facebook profiles photos. Then come the uninvited guests, and the substances, and the party giddily explodes. What elevates the format is the script. Paula Pell of 30 Rock wrote Sisters, supposedly with guidance from Fey, and her humor is often either precise (the spastic bedroom decoration of adolescent girls), or flexible for improvisations (a wonderful two minutes of Poehler struggling to pronounce a name). But Sisters is always about just that.

Sisters is tied into the hopes and dreams of two sisters working their stuff out at the dawn of their forties. While the film does bring the gags, Sisters is anchored to two likable, flawed, and interesting people. In the annals of comic duos, Poehler and Fey will be remembered for their charitable musings – each is at once a straight woman and a ham. They make you want to hang with them, and perhaps that’s why Sisters works so well.

Without giving away all the reveals, because there’s a nice element of surprise to the casting, there’s something like a baker’s dozen of cameos from recognizable and very funny faces. Sisters is a sort of who’s who roster of SNL alumni, NBC sitcoms, and yes, the WWE (Cena’s in the ads, yes, but holy mackerel does he make his 15 seconds count). Sisters, in addition to its leads and conscientious comedy of inflation, is the kind of movie that benefits from people who look like they clearly want to be in it and do their best stuff in small parts. To name just a few, Ike Barinholtz of The Mindy Project is a charmer of a neighbor. Dianne Wiest and James Brolin get bawdy as the Ellis sisters’ parents. And Maya Rudolph, well, let’s just say she mixes awkward and resentful quite well.

There’s a one-off line from a spinster character played by the eternally under-used Rachel Dratch, and it’s funny in how it’s used to assess the dire straits of a party filled with cattle-like fortysomethings: “At least the women are making an effort, but the men look like they’re being slowly poisoned.”

And yet, what’s funnier is how it becomes a sort of thesis for current female-fronted comedies, and possibly the state of popular films right now as well. Sisters has arrived at a curious moment. Its exterior is that of a kind of Animal House variant with leading ladies, not unlike last year’s Neighbors, or the recent The Night Before. Yet unlike those movies, the insistence isn’t on big-shouldered broad comedy achieved through cheap drug humor and hyperactivity. No, Sisters remembers how to make a joke with wit and timing, along with expert craft. And filth. (“I have to go clean ‘I Heart Balls’ off the fridge.” Fey says. “Yeah, sorry I wrote that.” Poehler responds.)

Look at what’s out there right now, as prestigious films jockey for awards season positioning. There’s Leo getting mauled in the wild. Daniel Craig is ushering in the “sad Bond” era. Fey and Poehler are just looking for a good time, and it’s duly appreciated. The only poison they put in themselves is a few too many shots, but if Sisters is any indicator, they’re happy to share.