Henry Rollins: Comedy, Violence, and the Boredom of Eternity

The longtime frontman discusses his first role as a leading man 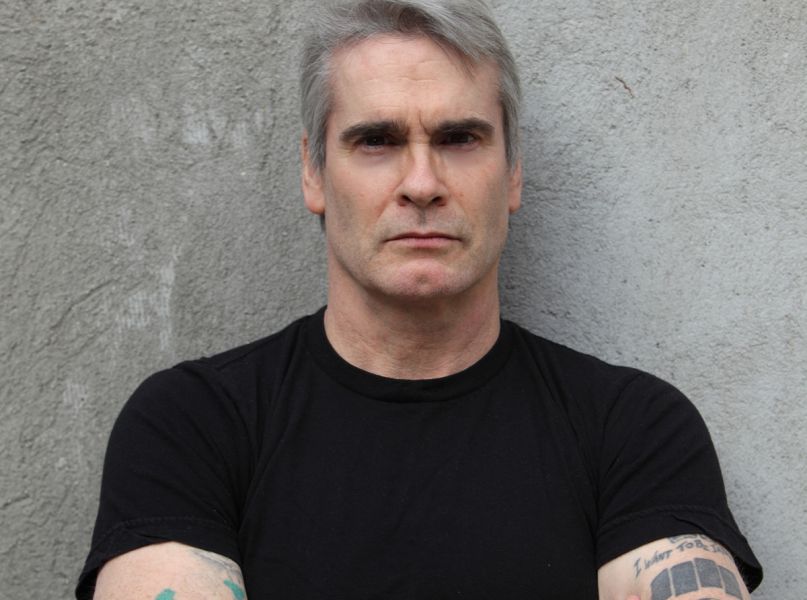 Henry Rollins’ famous intensity has for years made him a virtual shoe-in for any number of small, supporting roles. He’s played everything from cops and hired muscle to slightly unhinged youth hockey coaches, all driven by the same menacing rage that’s long made him a musical icon. He’s managed a successful career by being painted in those broad strokes, but he’s never been afforded leading man status — that is, until writer-director Jason Krawczyk handed him the script for He Never Died.

Krawczyk had Rollins in mind when he penned the character of Jack, a man bored stiff by his immortality who lives life trying to suppress his violent urges. He’s mostly successful at keeping his blood lust at bay, until the abduction of his daughter sets off a freakishly gory chain of events. A hilarious, ultraviolent romp, He Never Died genre-hops across comedy, horror, and science fiction with wild abandon, and Rollins carries the film admirably with broad shoulders from first frame to last. We caught up with Rollins by phone to talk about the film, making the jump to a lead role, the drudgery of eternity, and why’s he’s expertly cast as a bloodthirsty cannibal.

How did you get involved with the film? Are you a fan of science fiction or horror?

Not necessarily. I was just given the script. It quickly occurred to me that it was one of the best scripts I had ever read and that I wanted to be involved. That’s kind of it. It had nothing to do with horror. I just read it and went, “Damn. This is brilliant. It’s funny and smart and different.” The timing worked out, and I literally met with the director and producer the next day. I found out from them that it was written with me in mind. I thought, “Well, OK.” That was a very new experience for me. I just said, “I’m in,” and we went forward from there.

A lot of actors feel pressure to meet expectations when roles are written for them. This being your first leading role, was there any of that as you were preparing for the part of Jack?

Well, when he told me he wrote it for me, I said, “Really? A guy who eats other people, who kills and is a total monster? Thanks, Jason. How nice of you. What have I done that makes you think I’d be right to play some ghoul?” He said, “Just watching you work, I really think you understand the idea of violence and comedy being one thing at the same time.” And that’s why I laughed my ass off reading the script. It was by turns funny and violent, and I just loved it. He just thought I could entertain both worlds at once. I just said, “Cool.” I was lucky to have him interested in me and to write this cool thing, so we shot it. The whole thing was one stroke of luck after another.

Quite often, someone will come to me and say, “Hey, here’s a script. We really want you for this part. We know you can do it.” I’ll say, “Great, I’m on if it ever gets funded.” Then you forget about and think, “Oh yeah, what ever happened to that?” And someone tells you, “Oh, well, it went away. They couldn’t get it.” That’s usually my experience. Much to my surprise, these people kept in touch with me, [producer] Zack [Hagen] and Jason. They kept in touch with me through Heidi, this woman who runs my office. She said, “Guess what? They got the funding. This is gonna happen.” Get out of town. I had 11 months to prepare my character, and I used all of it. Suddenly, we’re in Toronto and I’m blocking out my scenes. It’s like, “Really?” We did the damn thing. To be able to actualize something so cerebral and a year later to be in a theater watching it, it was an extraordinarily rewarding experience.

Right, just that sense of accomplishment.

I’m used to getting that on my own. I write a book. I put out the book. I publish it. I make a record. I record it and produce it myself. It comes out on my label. I have no problem entrusting myself to do it, because I’m gonna get it done. In a movie, you have to depend on so many people. If one person goes, “Nah,” then OK, off down the hill we go tumbling.

A lot if it is letting go of that control, just letting the process take care of itself and focusing on what you can do to make it work.

Yeah. I asked them, “Is there anything I can do?” They said, “Not yet. If we need you to charm someone, we’ll let you know.” But the money came about fairly easily.

But you were involved in the film beyond your role onscreen, right?

I helped cast it, and I was involved in the soundtrack. That’s why you see me credited as a producer during the end credits. I’m not a real producer, but they asked, “Would you help with casting?” I said, “Well, OK.” I didn’t want to. I never saw myself as a casting agent, but I did it, and I think I made good choices. The choices I made are the people you see in the film. It was unanimous, we all decided. Those who got cast, it was obvious. The part was theirs.

Your performance particularly was interesting because of how minimal it is. It’s a very restrained character. He doesn’t say much. There’s an economy of words.

Well, that’s Jack. He goes for efficiency. When he kills someone, it’s not dramatic. It’s “boom, boom” and he’s done.

I bring it up because you strike me as someone who operates in a similar fashion in your own life. I get the feeling you take the approach of, “Let’s not bullshit. Let’s get it done and move on to the next thing.” Did you draw on some of that from your own life when you were working out the character?

The film plays with the idea of immortality and eternity in an interesting way. Most people dream of what it might be like to live forever, but your character shoulders it as some kind of burden, like it’s this thing he has to contend with.

He does. Jack lives a 24-7 existential crisis. That’s the biggest thing that drew me to the character: the hell of eternity. I don’t want to die tomorrow. I have a lot of stuff that I want to do, but I really don’t fear death. I don’t know if I’d like to be in my body 120 years from now if it keeps aging the way it does. You and I, we do everything we do with our mortality in the back of our minds, as in “10 things to do before you die.” We say that and we laugh, because death is assured. Should I talk to that girl or not? What do I have to lose? I could be dead tomorrow. You just do whatever it is you’ve gotta do, because death is certain. If you take that off the table, then where’s your urgency? I think Jack is kind of an example of that. Anything that happens in his life happened 600 years ago, 1,200 years ago. How are you gonna blow his hair back? There’s nothing you can do. So that’s his approach, just that of this depressed, kind of bummed-out guy. When I asked the director, I said, “He’s very low key.” He was like, “Oh yeah, to the point of being no pulse.” And that’s the way I read him. That’s why I talk in a monotone. I only raise my voice one time in the film, when I ask the bartender about my daughter because he’s not paying attention to me. Then it’s back to my monotone flatline.

Has tackling a lead role changed the way you look at acting? Has this film in any way raised the bar for the kinds of projects you’ll be looking for now that you have a lead part under your belt?

I’m one of those types who’s grateful for anything. If they came to me with He Never Died and I was one of the dumb bad guys, I would have said, “Sure.” I would have been jealous, because I would I have thought, “Damn, I could have done the Jack part.” But I wouldn’t have been surprised with getting one of the smaller parts, because that’s what I’m used to. I have no illusions of myself or my acting talent, so I’m grateful for any parts that fall onto my plate. Playing the lead role was an amazing opportunity, and honestly I was quite surprised. Usually I’m the guy who gets his throat torn out or the guy who gets thrown into the water. I’m quite used to those parts, and I take them. I’m happy, and in four days, I’m done.

That said, you’ve shown that you can tackle a bigger part with some teeth.

I think I pulled it off. I was happy with my work. I think I shouldered it. I asked Jason at the end of every day, “Please, lay into me if I’m not making you deliriously happy.” He said, “Are you kidding me? You are crushing all expectations. Everyone’s loving it.” So, I took that as an OK.