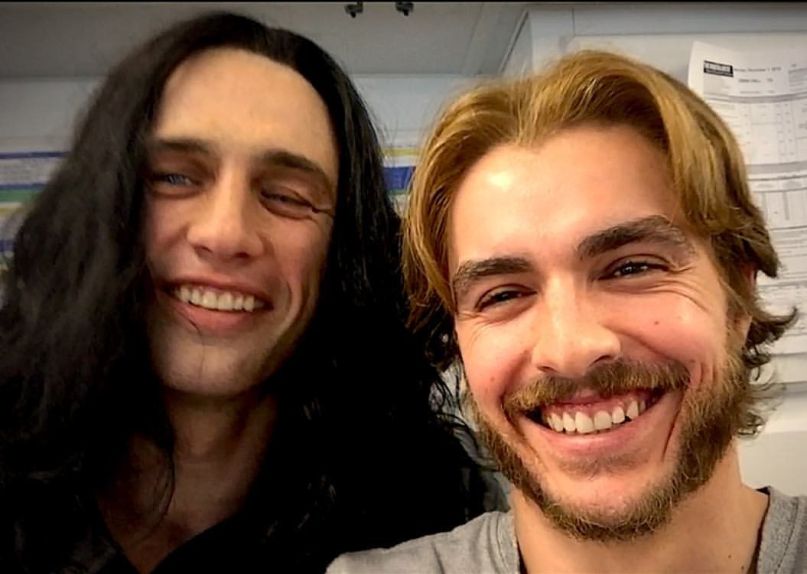 Earlier this year, it was announced that James Franco and Seth Rogen would helm a film based on the making of Tommy Wiseau’s so-bad-that-it’s-good classic The Room. In true Wiseau-form, James will both direct and star in the movie as the lead role of Wiseau. He will star opposite of his brother Dave Franco who will be playing Greg Sestero, the actor who portrayed “Mark” in the original movie as well as the author of the book that inspired the film, The Disaster Artist. Production started on the movie today and with that comes a photo of the Franco brothers in costume. It’s quite the sight to behold.

This isn’t the only big news to come out for the movie this week. The Hollywood Reporter announced on Friday that Josh Hutcherson (The Hunger Games, The Kids Are Alright) would be taking on the role of Philip Haldiman, who played Denny in The Room. Hutcherson will be joined by an eclectic cast that has also been revealed today to include Hannibal Burress, Kate Upton, Ari Graynor, Jacki Weaver, and Andrew Santino. Buress will portray Bill Meur, the owner of the stage rented by Wiseau for the film; Gaynor will dawn the famous red dress to take on the role of Juliette Danielle, aka “Lisa”; Weaver will portray her character’s mother “Claudette”; and Santino has been cast as the actor who plays the goof-ball friend “Mike”. Upton’s role is currently unknown.

Update – Friday, December 11th at 9:30 a.m. CT: According to The Hollywood Reporter, Alison Brie, who is engaged to Dave Franco, has also joined the cast.

The film currently does not have a release date, but if this photo and casting are any indication, we think it has a good shot at tearing us apart. Revisit the trailer for the original The Room below and admire the Franco brothers striking likeness to the movie’s leading men.