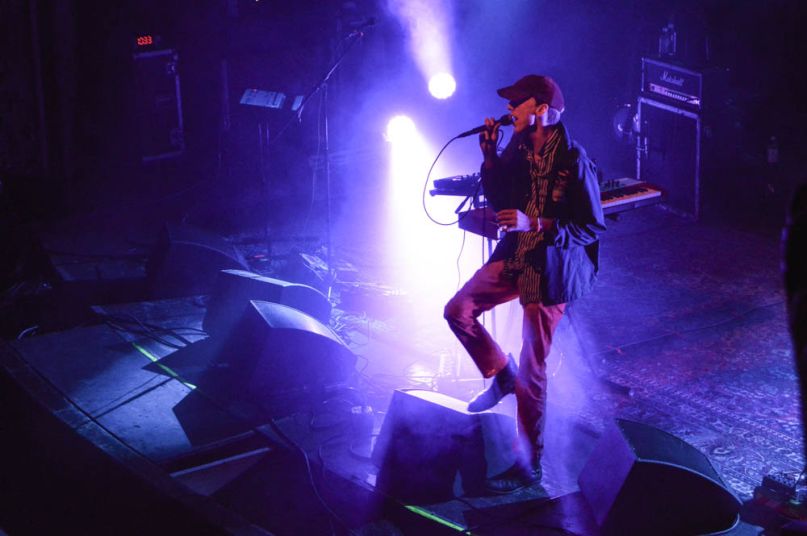 There was a two- or three-minute delay between Deerhunter taking the stage and starting to play. It looked like the band had a couple surprises, maybe even a cover or two, up their sleeves, but whatever special plans they had would have to be tabled for another show. “Well, two ideas failed, so we’re just gonna play the same setlist that we did earlier,” said Bradford Cox, the band’s frontman, after a quick, unsuccessful go at solving some technical issues.

“Challenge yourselves!” yelled some clown who wasn’t aware (or didn’t care) that he was speaking to a guy performing his third set of the day in the middle of an intensive tour behind an album his band made within months of him being discharged from the hospital after getting run over by a car.

“I challenge myself every time I walk onto the stage,” Cox responded without a trace of combativeness or defensiveness in his voice, the way you might inform somebody that it’s raining outside. The crowd roared. That was the end of that. It was also the start of Deerhunter’s Sunday night set at Thalia Hall, the venue’s second Deerhunter show of the evening, which also had Cox opening for his own band as his solo persona, Atlas Sound.

The last time Deerhunter toured, they were floating a new look: two new core members in guitarist Frankie Broyles and bassist Josh McKay; grittier, colder sound tendencies; and Cox in a new, nine-fingered character. That was in 2013, in support of Monomania, their sixth album in eight years.

The suggestion behind these Fading Frontier shows, however, is the same as the album’s, and it is clear: Life feels too fragile at the moment to spin new looks, to try on a radically different lens, to go for anything but an update of the consummate Deerhunter — it’s time to win now. Cox’s wig and hand bandage have made way for a baseball cap and patch-smothered jacket. Guitarist and occasional bandleader Lockett Pundt, drummer Moses Archuleta, and McKay — the remainder of the latest lineup — were meanwhile looking sharp, stretched, and simply at work. Those who depend on Deerhunter strictly for the instantaneous thrill of a good, hard-left pot-stirring are welcome to hibernate and come back to Fading Frontier in 20 years with more appreciative ears. Everyone else would be wise to respect the cap.

Not that Cox was concerned with 2035. If anything, his mind was 20 years in the past. For four consecutive songs, Cox followed the last notes by taking the mic and casually name-dropping an artist of a past era, for reasons not entirely clear to me. “Roxy Music,” he said after “Living My Life”. Made sense: this was a punchier, alternate version of the lush Fading Frontier single, its rhythm section more dance-ified than the original. “David Bowie,” he said after “Rainwater Cassette Exchange”. Sure: another tweaked arrangement, tough to detect the exact Bowie-ness, but then again, is there such a thing? Then, “Wire” after Fading Frontier opener “All the Same”, and finally, “The Walker Brothers” after “Take Care”. Why not: This last one was the highlight, a glowing waltz that closes Fading Frontier’s first half with a graceful authority and thrives even more from the stage, enhanced by a stratospheric guitar solo from Pundt. It basically gives Cox the right to align himself with whomever the hell he wants.

Now, considering his choice to open for himself for dozens of consecutive shows, it would seem that Cox designed this tour with a central goal of painting the most telling, accurate portrait of man and band possible. It’s a frame of mind that lends equal weight to this very moment and a band-legacy in progress. “No one wants to die alone,” he sang on “Shelia” in his Atlas Sound set — a beautiful and generous 45-minute work of loop-founded melodies and atmospheres — before following that lyric with a more comforting idea, to “die alone together,” and repeating it over and over. That particular line felt centering amidst a sold-out room full of listeners.

They, above all, are who Cox and Deerhunter are giving it up for this year. The setlist (even if it was Plan B) was one that could reasonably double as a “Best Of” track listing — with some slight, expected favoring towards the new album (though they skipped “Ad Astra”, a recent regular and the namesake of a special scotch ale from Middle Brow Brewing that was served at the show and that I very much enjoyed). The Pundt-led Halcyon Digest nucleus “Desire Lines” kicked it off, followed by new single “Breaker” — marked by the rare sight of Cox and Pundt harmonizing on a chorus — and capped with a 15-minute version of “Nothing Ever Happened”, which remains the most electrifying live Deerhunter achievement to date.