We Are All Coldplay 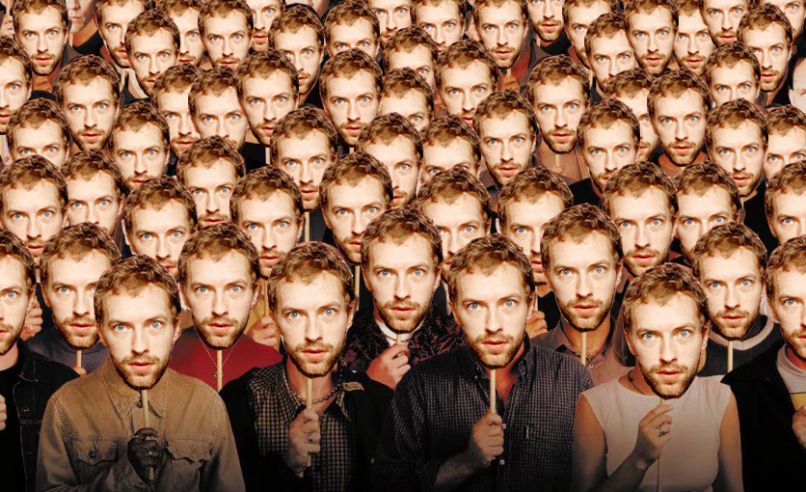 Even for the biggest rock band in the world, sampling the sitting President of the United States is a shift toward the mainstream. In the run-up to Coldplay’s seventh (and possibly final) LP, A Head Full of Dreams, news broke that the band would use a clip of Obama singing “Amazing Grace” on one of the record’s songs. The sample unites the most recognizable person on the planet with one of our culture’s most recognizable melodies, a moment shot through a pop culture supercollider by the world’s most widely known rock band. What we have here can only be called a singularity of ubiquity.

Mass culture, whatever our comfort and discomfort with it, represents a relatively new phenomenon of the last 75 years. Even to be able to type the words “biggest rock band in the world” reflects a common understanding of industrial, technology, and economic development stitching us together with invisible tendrils. The same apparatus allowing you to read these words, a product of extractive resource management and 20th century capital and nation-state formation, has allowed Coldplay to exist in the collective consciousness as a cultural icon. Whether you love or hate Coldplay, no one needs to explain their existence to you.

Like wireless internet, mass culture surrounds us whether we see it or not. Hannah Arendt worried in her 1961 essay “The Crisis in Culture” that “market-driven media would lead to the displacement of culture by the dictates of entertainment.” More than any rock band since U2, Coldplay harness the overlap of mass culture and mass media. Like an overly focus-grouped movie, each Coldplay album since 2003’s A Rush of Blood to the Head has distilled prevailing media trends into a codified, entertaining, and sometimes cynical package of songs.

The litany of Coldplay’s digestion and regurgitation of cultural trends is long: the post-Arcade Fire impulses of “Viva La Vida”; the wide-screen global pop of “Every Teardrop Is a Waterfall”, “Paradise”, and the Rihanna-driven “Princess of China”; the electronic R&B of “Magic”; and the cut-rate EDM of “A Sky Full of Stars”. Each moment revealed Coldplay to be a few years behind the leading edge of new cultural developments. It is perhaps no surprise that Chris Martin is so often walking toward the viewer in the band’s videos. He is quite literally behind the receding camera, never reaching the viewer moving away from him at every moment. He is always slightly removed from us, always chasing us. And yet Arcade Fire never sent a song to no. 1; the “Viva La Vida” video has been viewed 220 million times.

When Chris Martin and his band performed their latest single, “Adventure of a Lifetime”, at the American Music Awards, four dancers in gorilla suits arrived near the end. Maybe it was supposed to feel edgy and fun; instead, it felt like Wayne Coyne and Miley Cyrus reprocessed for PG audiences. The performance was only a few degrees from the Kia commercial with dancing hamsters. The song itself, while hard to pinpoint as outright plagiarism, reflects Coldplay’s desire to ride the last moments of a guitar sound that rocketed songs like “Uptown Funk” and “Moves Like Jagger” into the mainstream. Not unlike sampling the President, Coldplay now aren’t cribbing their moves from the edges; they’re repackaging aesthetics from dead center.

The band has become broader in its appeal and scope, producing a reflexive backlash. Describing new song “Everglow”, on which his ex-wife and celebrity Gwyneth Paltrow sings, Martin gushed: “I was in the ocean one day with this surfer guy, who spoke just like you’d imagine a surfer guy to speak … He was like, ‘Yo, dude, I was doing this thing the other day man, it gave me this total everglow!’ I was like, ‘What an amazing word!’ Then the song came completely out.” It could mean – and is – anything to anyone.

While some of the cynical marketing and generic songcraft explains Coldplay’s fantastic popularity, it only hints at their unique position of being loved and hated with passion. In 2005, reviewing the band’s tipping point X&Y for Pitchfork, Joe Tangari called the band “carefully measured” and “nervously self-conscious.” So too are Coldplay’s fans and detractors. Listening to Coldplay has always been a look in the mirror, hearing a familiar sound or seeing an aesthetic retreaded for mass consumption – producing, alternatively, allure and disgust. Loving and hating Coldplay come from the same moment of recognized reflection, of self-consciousness. We glance at a version of ourselves.

Coldplay, because of their incredible visibility, hold the unique power to throw trends back at us. Look at yourself long enough in the mirror and you will feel equal parts beauty and disgust. Look longer and you become unrecognizable, just a bag of flesh holding your soul. Look long into Coldplay and you may see nothing but a version of yourself; look longer still, and you see nothing at all. Their popularity is undeniable, as is their ability to divorce signifiers from meaning.

Perhaps they are so beloved because of their ability to render cultural trends meaningless. Our comfort and disgust with the band lies in their emptiness. They’re the final word in cultural discourse; once Coldplay does it, it isn’t a thing anymore. We are, likewise, constrained and freed by their meaninglessness.

Did our cultural climate demand a band like Coldplay, or did the band merely fill a need we never knew we had? Did we make Coldplay, or did they make us? Are they us, or are we them? Coldplay represents a simulacrum, a copy of a copy. Only Chris Martin could put a painting from the 1830 French revolution on the cover of a pop record, firmly divorcing the radical Delacroix work “Liberty Leading the People” from any meaning. In the video for the title track, “Viva La Vida”, the band becomes artwork through the power of a camera filter meant to approximate the finish of a cracked oil painting – the simulacrum in action. The album’s title, maybe their most apt, reflects its own meaningless linguistic ouroboros: Viva La Vida. Live life. This blithe tautology could mean anything to anyone, and it does.

At the conclusion of the videos for both “Fix You” and “A Sky Full of Stars”, the audio of the band’s performance becomes a chorus of voices from the recorded crowd. While this sing-along is a fairly common trick in pop and rock music – the pointing of the mic to your many vociferous fans – it is less often done in the confines of a music video. But the part where they become us and we become them is critical to grappling with Coldplay in 2015. In the video for “Adventure of a Lifetime”, the band is played by poorly animated apes. Martin’s digital primate walks towards the camera again, close but never quite reaching us.

It is the space between viewer and band that Martin and his band try to collapse. That space is the “Happy Birthday” aspiration, the song and the band that everyone knows. Coldplay are as close as any band to closing it, and yet the space remains.