A celebration of the legend's greatest roles -- some evil, some good 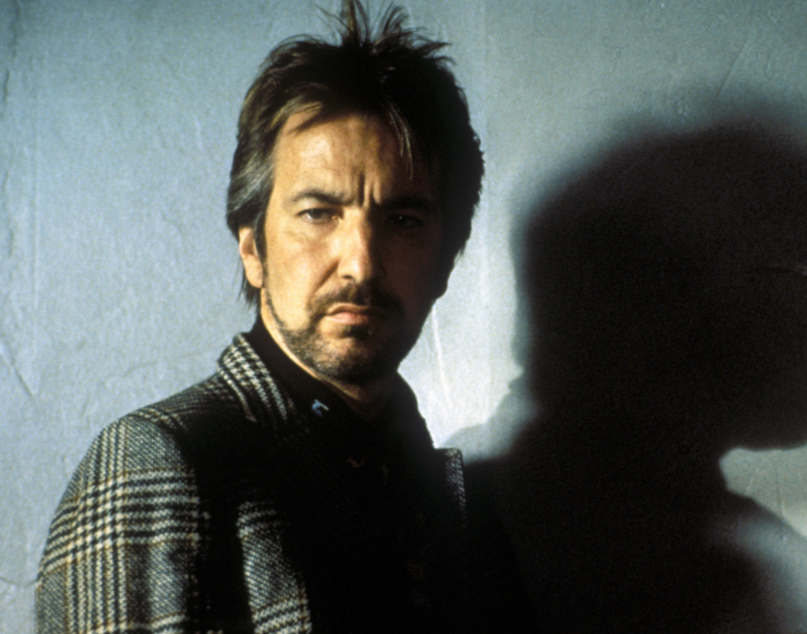 He was the villain. Until he wasn’t.

You can take this angle on the late Alan Rickman in two ways. The first is his film career, in which the actor set himself up to be a go-to heavy for years to come. His Hans Gruber in Die Hard was the perfect foil for Bruce Willis’ John McClaine — the former neat, succinct, calculating while the latter was a mess, foulmouthed, and always improvising. Then there was the scenery-chewing performance as the Sheriff of Nottingham in Robin Hood: Prince of Thieves, a movie oft-maligned but not because of Rickman. Far from it. These evil performances were not an indication of what would follow. Most of Rickman’s future, post-Robin Hood roles found him playing good people or at least non-terrorist/murderers. You could root for most of the characters on the following list without feeling bad or ashamed (shhhh #teamgruber).

The second take on the villain/not a villain lands in the world of Harry Potter. Is it safe to spoil now? Better not, though I guess I already did. Read on.

Alan Rickman’s career began on the stage, but it was his performances on screen that took him across the world. It’s there where he’ll live on forever. We now present to you a celebration of his greatest performances. Some evil, some good…

I am far and away the least qualified candidate to speak on the historical accuracy where Russian royalty is concerned, I barely passed AP World History as a teenager. However, where Rasputin comes in, only two names follow – Christopher Lloyd of Anastasia fame and the drunken antics of Alan Rickman’s (not so metaphorical) dick-waving turn at portraying one of human civilization’s most notorious occultists. Sure, he ain’t Russian (or German or anything else), but just look at his grime; look at his madness. Rasputin is Rickman’s equivalent to Amadeus: a fictionalized, exaggerated, award-winning brilliance that we can see no other man taking on. Go ahead and challenge him. We dare you. After all, this is not a character that’s known for dying easy. –David Buchanan

Now here’s a cutesy, witty, snarky indie flick about oenophiles and their obessions with wine. No, no, it’s not Sideways. Bottle Shock is a forgotten farce about the early days of wine and wine-making in 1970s California, and Rickman is cunning and charismatic wine shop owner sommelier Steven Spurrier. What’s most fascinating about this dramedy is the English purr of Rickman’s voice describing the art of wine, the process, the history and creation and craft that goes into every grape and glass. You listen to him speak with eloquent grace, and think, This guy should’ve been doing commercials, describing dew drops on grape skin, and winery pride or something. That is to say, Rickman embraces a certain snootiness (this is wine), but owns every line and every sip here. Rickman’s all smiles and bliss, charming, and is likely sporting a buzz here that makes him so very likeable. –Blake Goble

It took years and years for Douglas Adams’ beloved, existential sci-fi comedy romp about a posse of strange friends jaunting across the universe to make it to the big screen. And when it finally got a release in 2005 … the film broke even and has sustained a quiet home video life mostly thanks to the good graces of Douglas Adams enthusiasts. Hah. 42. Towels.

However, it can be easily declared that the very best thing about this movie was Alan Rickman as the bulbous, broken-hearted, clinically depressed robot, Marvin. Look at the sad green eyes! It was a role Rickman was born to play! Just listen to Rickman’s robotic sigh! He nailed the withering, oh-woe-is-me self-pity of Adams’ robot. It’s just funny to see a diminutive, shiny robot have the finely tuned voice of Rickman bemoan his lot in life as an assistant to far inferior humans and alien creatures. *deep sigh* –Blake Goble

There is a long-running battle between my mother and my fiancée for the defense/offense of Costner’s acting in Robin Hood, the biggest con being his absent accent in a period fiction. What we all seem to universally agree upon is this: If you’re striking for devilishly hammy authenticity, you can do no better than Rickman’s Sheriff of Nottingham. Just hearing the deliberate stammering emphasis on his pronunciation of “Locksley” is enough to send Maid Marion into a damsel panic. His near-BDSM-caliber outfit, his presence, and speech clearly later meant for one of Rowling’s great tragic characters – the question was not if he’d chew you up and slither away, but when. Another excellent case of his villainy genuinely making the film work. –David Buchanan

What was it about Rickman’s voice? It could express grave confidence and prove calm amidst hysterical co-actors. It could also be used with perfect comic intonation, conveying a sense of deep indignation that was hard not to laugh about. His audible pain could be our pleasure. For the master’s class in the latter, look no further than Rickman’s beloved role as Alexander Dane, or rather, Dr. Lazarus, in Galaxy Quest. He played the role like you might expect: a classically trained, preening actor. Rickman potentially drew on his experiences jumping from the stage to camp onscreen, but he does it in such a knowing, smiling, and frankly memorable way. Rickman put on the cheap prosthetic and eye makeup and showed up his flashier (and probably more expensive) co-stars as a mistaken alien god of sorts. Rickman was seriously funny stuff here. It’s no wonder he stole the movie from Tim Allen and has Galaxy Quest’s biggest quotable line. By Grapthar’s hammer … what a great bit part. –Blake Goble

“I kept thinking, just my luck. Dying of a sore threat.”

In Anthony Minghella’s soft-spoken romance of afterlives and last chances, Rickman was Jamie, a recently deceased husband coming back to visit his mourning, struggling wife. And that’s the first thing he says, and it’s with a sense of bittersweet knowing that we hear his modest disbelief. Rickman embraced a certain smiley-eyed gratitude and mannered optimism in a role that could have easily been deemed awkward, or worse, “that film with that ghost hubby.” Yet, Rickman glides through Truly, Madly, Deeply with such grace and warmth. The film originally aired on the BBC, but graduated to a theatrical release and netted Rickman a BAFTA nomination for Best Actor. It’s a soulfully touching performance, which really makes you wonder about love and time and what we truly, madly, deeply want to say to those we love before we leave this world someday. –Blake Goble

Rickman’s most famous roles have a very sharp edge to them, from Hans Grüber to Galaxy Quest, but one of his most mesmerizing performances was bewitchingly soft. As Colonel Brandon, the lovelorn friend to the Dashwoods in Ang Lee’s Sense and Sensibility, he crept forward by small steps, from his first wordless moments to a final jubilant, but still bashful, smile. That quiet approach made his slow, unlikely romance with Marianne (Kate Winslet, pre-Titanic) more than just plausible. He made you want to take Marianne by the shoulders, shake her, and bellow, “Girl, what is wrong with you?!”

What really makes Sense and Sensibility soar isn’t the love story, however. Colonel Brandon’s friendship with Elinor (Emma Thompson, a longtime friend and frequent collaborator) gives the film nearly all of its best scenes. They’re two people who have loved deeply and lost dearly and who find in each other kindred spirits: two souls that keep soldiering on, caring for others when the world offers little more than cruelty. How do they do it? With wit and warmth, or to state the obvious, with sense and sensibility. –Allison Shoemaker

It has been said countless times that Rickman had a voice in the pantheon of notable greats such as Connery, Curry, and especially Morgan Freeman. But long before Freeman became God, Rickman spoke for Him as the cynical, booming, and eerily calming Metatron in Kevin Smith’s protested-yet-poignant parody analysis of the Catholic faith, Dogma. He steals every scene, syrups every exposition, and would even make Revelation sound like a day at the Brimstone Beachfronts. And of course, let’s not forget the impressive, angelic wingspan or loathing of Wisconsin. As an old friend and Dairy Country native once said to me, “If hearing that voice of command meant being damned to eat cheese for eternity, I might consider it.” Long live the Voice of God. Now, stop talking to yourself and have some tequila. –David Buchanan

“Due to the Nakatomi Corporation’s legacy of greed around the globe, they are about to be taught a lesson in the real use of power. You will be witnesses…”

True. Witnesses to the definitive “bad guy” of the 1980s. Witnesses to a character that identifies himself as receiving the “benefits of a classical education” before ruthlessly gunning down corporate executives and corporate slimeballs with an equal lack of remorse. Not exactly your prince amongst thieves. Rickman’s breakthrough performance just missed the top spot (it was an honest-to-Yahweh back-and-forth), but it’s unforgettable. Hans Gruber is menacing. He can silence a lobby’s worth of hostages with a single glare. The actor plays this menace without hamming it up (too much). Actors have since attempted to duplicate his villainy (see: Tommy Lee Jones, Powers Boothe, etc.) just as much as they aped John McClane, but like those replays of Willis’ iconic character, most fell flat. There is only one Hans Gruber because there is only one Alan Rickman. –Justin Gerber

Picking one Harry Potter film to sum up Rickman’s funny, fiercely intelligent, and ultimately compassionate portrayal of Professor Severus Snape is an exercise in futility. Pick The Half-Blood Prince, which gives him the most complex material of the series, and you exclude the emotional heft of his final moments in Deathly Hallows: Part Two. Choose Deathly Hallows, and you miss out on the villainous, droll work he does in the early films. Pick one such film — say, Prisoner of Azkaban, in which he hops out of a cupboard as a boggart in Grandma Longbottom drag — and you exclude the terrific stuff in Order of the Phoenix, and on, and on.

Alan Rickman was a part of better movies than these, but what he accomplished over the course of the eight Potter films is staggering. He made the series so, so much better through both his performance and his presence itself. He took a character that was easily one of the most complex on paper and added incalculable depth, menace, and humor. Beyond that, he seemed to bring the best out of his young co-stars, Daniel Radcliffe in particular. Even when the young Harry struggled to find his footing as an actor, his scenes with Rickman sparked, and once Radcliffe had gotten his sea legs, their work together really took off. It’s a debt Radcliffe acknowledged today: “As an actor, he was one of the first of the adults on Potter to treat me like a peer rather than a child … I will carry the lessons he taught me for the rest of my life and career.”

That’s all a long way of saying that the Harry Potter books mean a great deal to people — kids and grown-ups alike — around the world, and not a person who worked on their adaptations brought more thought, heart, and depth to their realization than Alan Rickman. Will we remember it for years to come? Always. –Allison Shoemaker