Atlanta rap trio talk about innovating and originating, but don't do much of either 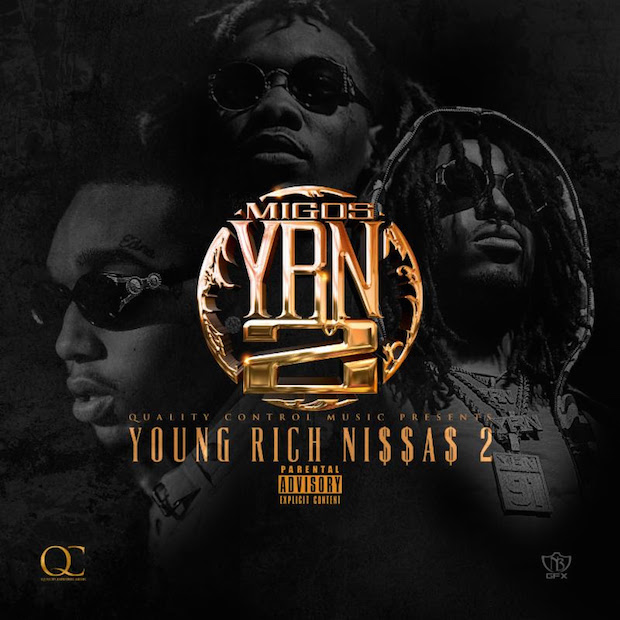 Over the course of the last few years, Atlanta rap trio Migos (comprised of fast-talkers Quavo, Offset, and Takeoff) have become fodder for irreverence and praise in equal measure, a cultural pacemaker turned meme that became a litmus test for taste when fans pushed them into competition with decades of Beatles acclaim. Talk of Migos being better than the Fab Four was at least partially a response to fatigue surrounding the latter’s seemingly impenetrable critical consensus, but the rap group’s Beatles-shaming ovations, though exaggerated and often offered in jest, were based on real merit: Migos’ compact, chant-happy bloviations lend themselves well to virality, with phrases and ideas that speak the Internet’s real-time, keystroke-oriented language.

The Migos phenomenon doesn’t happen without Young Rich Niggas, the breakthrough mixtape that produced brand cornerstones like the Drake-pushed “Versace” and “Hannah Montana”. It still stands as the most prominent work from the trio. The success of the project and its follow-up, No Label 2 (which produced the hit “Fight Night”), inevitably led to a deal with 300 Entertainment and Atlantic, and momentum seemed to be building for a big rise. But 2015 proved to be a down year for Migos: Buzz began to dwindle and Offset was repeatedly denied bail during the group’s album rollout after an incident at Georgia Southern University in which all three members were arrested. Despite being a fascinating listen and a palate cleanser for rappers who had been growing increasingly repetitive, their debut, Yung Rich Nation, was met with little to no fanfare, a near death-blow for a rap trio screaming to be heard, one that needs call and response.

It makes sense, then, that on the heels of a poorly received (albeit under-promoted) debut and shrinking interest, the trio would return to the well from which they first struck oil — a sequel to the Young Rich Niggas tape that established their buzz in the first place. On the surface, Young Rich Niggas 2 picks up where its predecessor left off, drilling the pockets of empty space in productions from Zaytoven, Dun Deal, Phenom Tha Don, and StackBoy Twan with cascading cadences. “Bars”, for example, is the definition of a Migos song. But where YRN felt like a fun-fueled expression of trap enthusiasm, changing the status quo with a rough-and-tumble approach to lyricism, YRN 2 often feels like a desperate attempt to cling to relevance.

On YRN 2, Migos seek their due. The trio really wants credit for inventing dabbing, the viral dance craze that’s become the move of choice for MVPs and presidential hopefuls alike, and they mention it often. (“We the ones came up with dabbing/ We put ‘em on trap fashion,” on the intro; “We gave the world dab,” on “MuhFuckn Tired”; “Want to talk about dabbing/ The difference between us and them/ We created that shit,” on “WOA”; “The way they took a nigga’s dab I want to smack a nigga,” on “Commando”.) They also want to be acknowledged for coining the term bando (On “Commando”: “We the first ones that came up with the bando”). These new, desperate attempts at ownership join their now incessant attempts at patenting triplet-rapping under the “Migos Flow” tag. Around every corner of YRN 2 is a reminder of what they’ve already done, so much so that it’s a deviation from what they do best: free-form, fun rapping untethered to messaging. There’s too much talk about innovating and originating and not much doing.

That doesn’t mean that Migos are suddenly incapable of bottling that energy. The tape boasts a few good songs, especially “WOA” and “Tripping”, which are both beholden to their Migosity. There are still meetings with the plug all over the globe (most notably in Lebanon) and remarkably colorful, seemingly off-the-cuff punchlines (“Chop a brick like I’m Tsung Shang” or “Young nigga in the hood eating honeysicles/ I’ma send your ho a text with the purple pickle”). There’s even a poignant moment from the usually spirited group on “Chapter 1”, where Takeoff raps, “Trap niggas trap in the trenches/ They been fingerprinted, they all in the system/ Rest in peace, Sandra Bland and Michael Brown/ I pray I don’t become a victim.” It’s a touching peek beneath the caricature. But despite fleeting glimpses of the garrulous gabs that garnered Migos acclaim in the first place, there is simply nothing novel here.