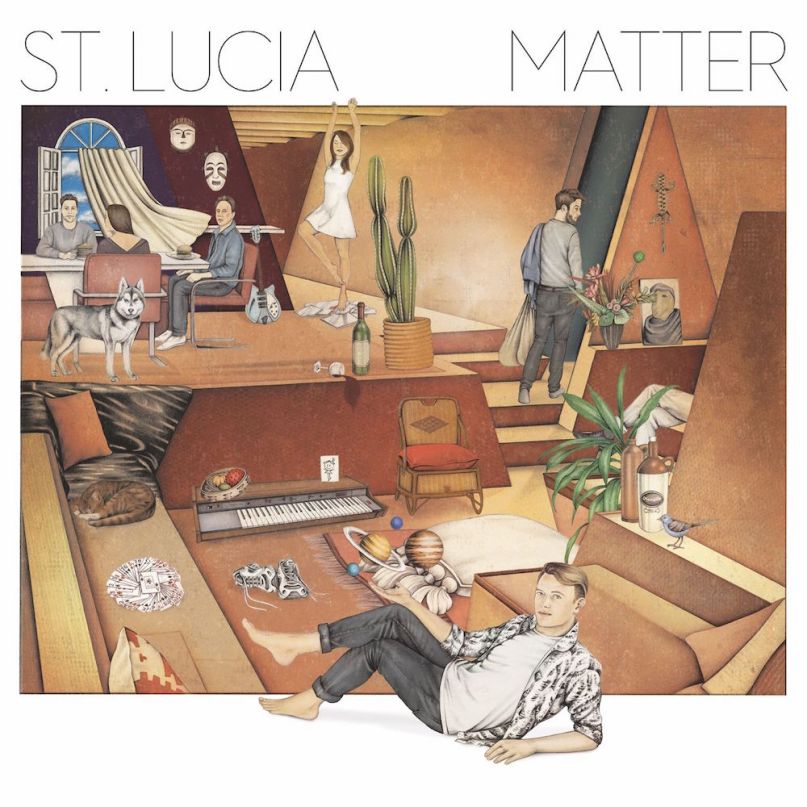 If some is good, more is better. That seems like a bizarre tenet from which to operate in an era of uncertainty and self-consciousness. But synthpop is fast becoming the last refuge of the conspicuous consumer — a genre where excess isn’t just rewarded, it’s an organizing methodology. It is within that world that Brooklyn-via-South-Africa musician Jean-Philip Grobler returns with his second LP as St. Lucia: Matter, an exploration of the limits of decadence in what might be the last days of over-indulgent pop.

Grobler has gained moderate renown for his weightless synth arrangements, the kind of music colored exclusively in shades of turquoise. St. Lucia proved an apt moniker for early singles like “All Eyes on You”, in which swirling synths spun in eddies of big drums and memorable hooks. It was beach music for the city, like a four-minute-long Corona commercial. Neon Gold, the label that broke Passion Pit and Ellie Goulding, signed Grobler and released his first EP and LP, the latter under a relationship with Columbia Records. Passion Pit in particular hangs gargantuan over St. Lucia, and in fact the entire discourse of synthpop in the past decade. They’re the rare band that could name an LP Gossamer and fulfill it perfectly. With Matter, Grobler tries to follow their pattern, in all the excess, brilliance, and terror.

On lead track “Do You Remember”, Grobler sets an ebullient keyboard loop against booming synthesizer blasts. Motoring along toward one of those cloud-clearing choruses to which most St. Lucia songs aspire, this one arrives at a chanting hook modulating between a few pitches, a gesture inspired by Top 40 radio even if it will never play there. Creeping commercial cynicism hangs everywhere in the album’s grandiose optimism. On the bizarrely anti-intellectual “Dancing on Glass”, Grobler wonders “How long ‘til we learn dancing is dangerous?” The chorus surges with a familiar impulse, fists raised to the sky like a John Hughes movie climax 30 years too late, in which everyone is conventionally attractive, happy, and rich.

By the time the yelping and propulsive “Physical” arrives at track four, Matter has already become exhausting. Grobler spends a good portion of the track yelling “Phys-phys-phys-physical” at the listener, a line that works in describing both his desire to move you and the degree to which it can all be tiresome. The song builds layer upon layer, creating a richness that isn’t quite depth. When the chorus hits, a vocal loop that sounds like a police siren arrives with it. If it isn’t gilding the lily, it’s certainly bedazzling the shit out of it. On the six-and-a-half-minute “Rescue Me”, an unintentional and biting double entendre, listeners are treated to a post-modern traipse through recent pop history: The synth stabs and chord resolutions are lifted from “Thriller”, the melody is “Addicted to Love”, and the back-beat is cut straight from Frankie Goes To Hollywood’s “Relax”. It’s dense and hypnotic; it feels endless and not at all relaxing. Any of these songs in isolation might be enjoyable, but as a collection, they’re nearly nausea-inducing.

St. Lucia shows a modicum of range on the snapping slow-jam “Love Somebody”, but the damage of bloated arrangements has already been done. Committed to maximalism, it’s hard to picture to which (if any) impulses Grobler said no to when composing Matter. The album possesses a powerful if misplaced optimism. Even the title operates on two levels, substance mixing with a crushing desire to mean something to someone. The world Grobler crafts on Matter isn’t colored with the iridescent shades of blue from his early career; it is now a palate so bright and garish that it hurts the eyes.

Essential Tracks: “Do You Remember”, “Love Somebody”, and “Physical”