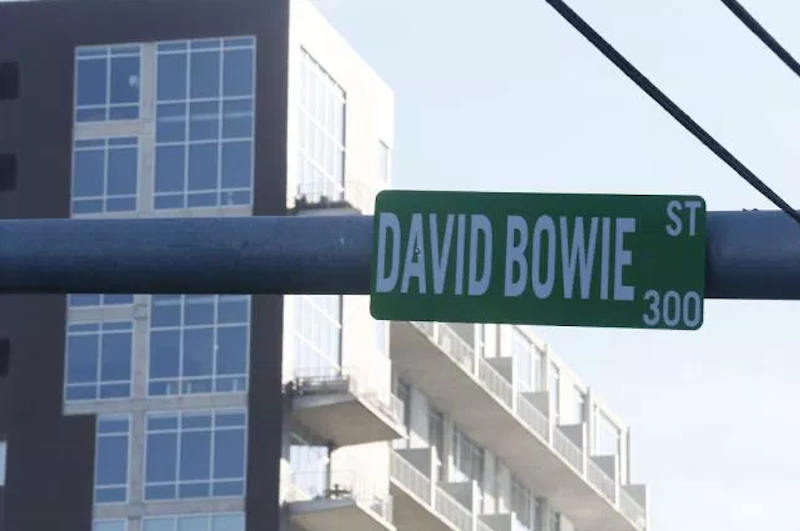 Tributes honoring the passing of David Bowie have been far ranging, from covers to clip recaps, from extensive features to tweets. However, not all the homages have been technically legal. As Austin360 points out, some enterprising fan in Austin, Texas has changed the Bowie Street sign at 5th Street to read “David Bowie Street”.

It’s not yet known exactly who made the ch-ch-change, but it just so happens that the South by Southwest offices are right across the street from the sign. Officials for the festival deny involvement in the swap, with founder Roland Swenson saying, “It’s just a coincidence it’s across the street from our office at 400 (David) Bowie St.”

Now, by all rights and laws, this is an act of vandalism, and since it appears the original Bowie St. sign has been removed to make room for the David Bowie St. one, we can add street sign theft to the list of offenses. However — and this is the amazing part — because Austin is as awesome a city as you’ve heard it is, officials have decided to leave the signage up for a full week as a memorial to the late iconic singer.

“The Austin Transportation Department has been notified that someone got creative with the street sign at Bowie and 5th Streets,” the ATD said in a statement, “changing the sign to read ‘David Bowie’ in memory of the musician and pop-culture icon. We appreciate Austin’s reputation as the Live Music Capital of the World and recognize David Bowie for all he did for the music industry and more. To this end, we will leave the sign up until Tuesday, January 19th, so our community can enjoy the makeshift memorial a few days longer. At that time we will have to replace it with the real street name sign.”

While we wouldn’t be surprised to eventually hear that some town somewhere has permanently renamed a road after The Thin White Duke, the short street in Austin’s Market District will have the honor for one week.