At 19 years old, the rising electronic artist isn't about to let preconceptions get in the way of her catharsis 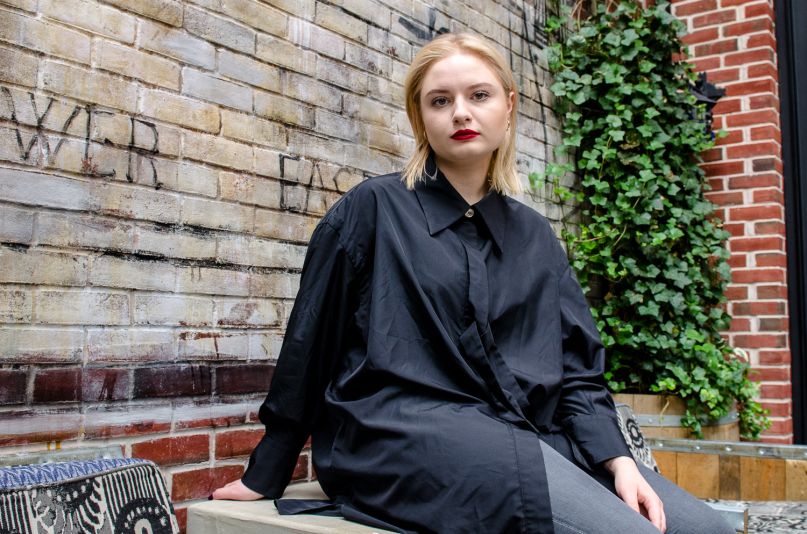 Her music isn’t confrontational, but Holly Lapsley Fletcher isn’t shy when it comes to her artistic capabilities. “I’ve spent hours producing this album,” says the 19-year-old singer and producer, who makes music as Låpsley, near the start of our phone call. “For my name not to be mentioned in the production credit is disgusting, and it wouldn’t happen if I was a boy.”

The rising British star believes deeply in cultivating her youthful perseverance and creative redemption and wastes no time explaining why write-ups all over the web are incapable of assessing her craft. “I definitely have no fear in standing up, so I’m rather going to say something than shit just staying the same,” she says. Although her upcoming album, Long Way Home (due out March 4th via XL Recordings), was recorded with the label’s in-house producer Rodaidh “Roddy” McDonald, she’s quick to point out that he was more of a creative facilitator. She was going from a home studio to a “massive fucking professional one” and needed help crafting melodies on a technical level. “If you interviewed Roddy himself, you’d get the full story. He’d be like, ‘Yeah, all the ideas came from Holly.’”

Låpsley’s past two years in the music business have found the rising Liverpudlian star struggling with people using her age and gender when assessing her talent. “I dunno, it’s like people don’t believe you,” she says. “I don’t feel like it’s vain to say I’m proud of my work, because men would get the appreciation. Sure, my production isn’t the same as Max Martin, but I have a go, and this is my stamp.”

Songwriting is a cathartic channel for Låpsley’s inner most anxieties and experiences — details she wouldn’t divulge candidly to a stranger, but which play out fluidly in her music. On songs like the surprisingly smooth slow-burner “Falling Short”, a despondent lower-register vocal underscores hers, allowing both voices to duel out opposing versions of her past. “Thought a lad sang this,” reads a comment on one of her YouTube videos. “I thought it was stupid that people would think it was anyone else but me,” she responds. ”It was obviously me singing!” Lyrically, she leans on a kind of conversational storytelling, reckoning with the ruins of a relationship by creating an alternate pitch shift to act as the ex’s point of view. “It’s all me,” she reiterates.

Though her approach to songwriting sounds modern, her technique has been brewing for years in an entirely different genre: classical music. Låpsley grew up playing oboe in the Sefton Youth Orchestra in Liverpool, in addition to jamming on the drums,  guitar, and piano. She learned a variety of techniques and instruments, and her parents supported a potential career as a classical musician. But she felt classical music was constrained by hard parameters. “I was very much a creative person, and I kind of hated playing music because it was written by somebody else,” she explains. “But I had this massive appreciation for the composers. Being sat in an orchestra and surrounded by this music that someone has written was just inspiring.” This realization allowed her to begin writing and producing her own material. “Like stepping stones, it really made it a lot easier to perform and write songs with the understanding of chord progression.”

That alchemy comes naturally to the 19-year-old, who cites the timelessness of music theory as encouraging. “Studying theory in music gives you an insight and a respect for music that I think a laptop can never give you,” she says. That said, she isn’t one to decry computer culture. “Laptops are the present classical instruments. Maybe this is the new era, and maybe we just need to explore it more.”

Close your eyes while listening to Låpsley’s recent singles, and you’ll hear plenty of playful analog synths added to her organic instrumentation: guitar, bass, piano and unusual percussive techniques. “One morning at 2 a.m., there I was, busy recording me shutting the door,” she laughs. It all knits together harmoniously, even if she’s singing about relationship incompatibility. Her airy leads and pitch-shifted, dense vocal counterparts transport you to a shadowy movie house. “I couldn’t shake off the fact that I was fascinated and obsessed with electronic music and how it was so synthetic, but man-made,” she adds. “I just loved everything about the soundscapes’ use of space.”

With such bold proclamations about space, it’s unsurprising to find out how much of it she was given when she was younger. Låpsley was born in Yorkshire and later moved to the northwest coast of Liverpool, where she dived into the underground rave scene. “I was really interested in experimental electronics,” she says. “We used to go out to techno and deep house raves.” Electronic artists can be a cagey lot, but Låpsley doesn’t fit the stereotype; she was a typical teenage music disciple who would spend days listening to everything from Foals, Arctic Monkeys, and Mystery Jets to Joni Mitchell, Kate Bush, and a northern UK trifecta of The Cure, The Smiths, and Joy Division. (“Of course, because my parents are from the North and very specific about their music.”)

Along with her assertiveness, one of the singer’s strongest traits is how she’s never really had rock star aspirations. “I didn’t want to do this at all,” she says. “I had my life planned out, with really good grades. I wanted to go to Cambridge and study glaciology and geography.” For most artists, pursuing a career in music at 17 would be intimidating, but for Låpsley, it was the only map she wanted to navigate. “The way I was brought up was that you have a fulfilled life because you have a certain profession that you worked hard on,” she explains. “There’s doctors, lawyers, and engineers in my family, and we were taught to work hard. I’ve always thrown myself into everything.” She admits she’s a confident person but has serious anxiety at the same time. “Whether that’s because I’m 19 or not, it all started because I was depressed in school and didn’t know what it was,” she says. “And obviously it was this creativeness that was being suppressed. You know those people who go to an art class once they retire and then realize, ‘Shit! That’s what I should have been doing?’ Well, I didn’t realize until I started writing music that, shit, this makes me happy.”

Her motivation began with her parents, who encouraged her to improve constantly. “My mum was more about, ‘You are a girl, so you can be whatever you want to be. You can be a female surgeon if you want,’” she says. “So I worked really hard, and then suddenly to have this career that’s not defined by exams, and you don’t know where the future’s gonna take you or whether or not you’re gonna have a pension…” She pauses momentarily with a sigh.  “It’s kind of like an insane wilderness. I hit a point where I thought maybe I need to jump into nothing, and that’s what it was.”

Lyrically, Låpsley pushes ideas inward to create a bold — even slightly unhinged — narrative voice. She’s enchanted by self-reflection, captured best during “Brownlow”: “I’m jumping into a pool/ And I don’t know where the bottom is.” She uses metaphors to soften the impact of that personal reflection. “I think it’s easier to write about things that are fresh,” she says. “Long Way Home was written in the course of a year, documenting different points of a relationship … Words come easier when the emotions are really strong, which is why I haven’t ever written a happy track,” she laughs. With songs like “Love Is Blind”, “Heartless”, and “Hurt Me”, she’s happy to get philosophical and real about her relationships, even directly with her ex. “I met up with my ex-boyfriend a few weeks ago,” she explains. “And I was like, ‘I’ve written an album, and it includes you. I’m not worried about saying too much. It’s a truthful account of my emotions.’ My shit is saying it, singing it, and writing it. That’s just how I cope.”

Despite being in the industry for only two years, her drive, ideas about life, and musical training led her quickly to three important milestones. To talk to the real Låpsley, Holly, is to marvel at the self-assurance of millennials. She’s a technically accomplished electro-fiend whose first two recordings, “Station” and “Painter”, were made with GarageBand, put up on SoundCloud, and immediately garnered attention. “Suddenly I was getting emails,” she says. “‘Who’s producing your music? Who is writing it? Do you want to sign this contract?’ I was like, ‘What!?’ Because I didn’t have this obsession or need to do this job, I’ve been able to look at things rationally, so I waited until after my exams to sign. I was like, ‘No, you can all wait.’”

At 17, three days after her A-Level exams with two days to rehearse, Låpsley’s first proper performance happened to be televised on the stages of one of the world’s most acclaimed festivals: Glastonbury. “I was like, ‘What the fuck am I doing?’” she says. “It was obviously the shittest performance I’ve ever done, but I swear to God, thrown in the deep end, that shook me, and I felt if I could do that, I could do anything.” That was the canon that catapulted her into the spotlight; next, she earned a nod as one of NME’s Best New Artists of 2016. “When I heard that I thought, ‘Shit, music must be bad if I’m one of the best new artists!’”

The US market hasn’t been far behind. Friday, January 22nd marked Låpsley’s American network television debut on The Late Show with Stephen Colbert, which came up during our conversation a day before the airing. How does she talk herself down when she’s anxious? “I think I’m so used to putting a face on,” she says. “It’s like I can act myself better. I can put on an act of myself, which is me, but it’s a confident version of me.”

With Låpsley’s tightly controlled sense of self, it’s no wonder she grabbed the attention of English indie record label XL Recordings. Radiohead, Adele, The Prodigy, M.I.A., and FKA twigs have all released music on XL, proving what the label excels in: ushering pioneering music directly into the mainstream market. Låpsley has gotten to tap into facilitators like the unflinchingly talented Cherise Payne, who has worked with Jamie xx and Adele. She also cites her label mates as inspiration. “Adele is an inspiration, but only recently have I started to look upon other artists and realize, ‘Shit, they’re people going through the same thing as me,’” she says.

Though she has a clear idea of the heights she wants to reach, Låpsley still isn’t aiming to be a rock star. She’s excited to see what reception her album will receive, but isn’t even completely sold on the career. “I think it’s going to give me a better idea for a second album and see if it’s even right for me,” she says. In the meantime, she’s enjoying every second of it, as evidenced by the album title: “If you’re walking back to a station, instead of going the shortest route, you decide to take the longest route home so that you can extend the amount of time that you want to be with [someone] before you have to say goodbye. Taking the long way home because you don’t want it to end.”