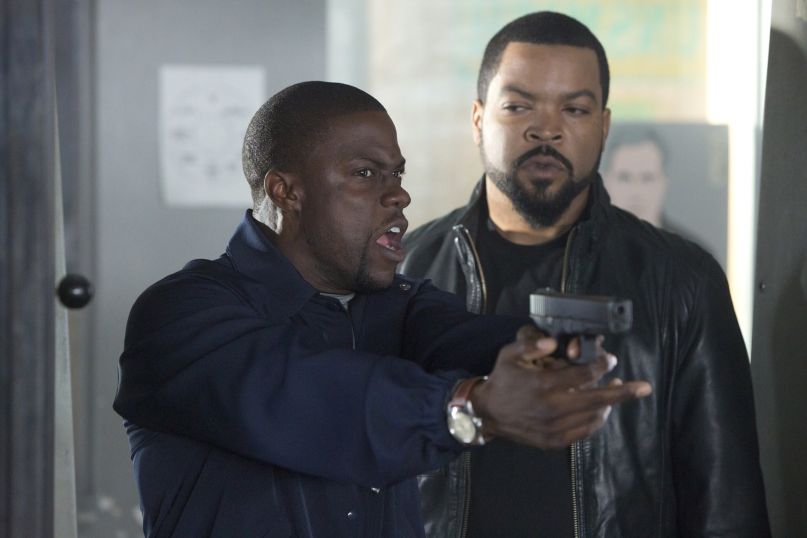 Kevin Hart is a treasure. Kevin Hart is so, so funny. Seriously. Just let him talk. He’s funny. He’s charismatic. He’s money in the bank. Ice Cube, too. The dude’s an unconventional heavy with a notorious real-life history that somehow never negates his ability to endear. Pairing them up seems like a foregone conclusion: one’s big, one’s small; one’s masculine, one’s metrosexual; one grunts, one shrieks. Dollar signs, y’all.

If you look at the box office numbers, that answer would be nothing. The first Ride Along, released two years ago this month, more than quadrupled its budget. The film cemented Hart as a viable leading man. It spawned a sequel. None of this is a surprise, necessarily; the formula’s airtight, the actors reliable, the checkboxes marked: comedy, explosions, cleavage.

The tough thing about creating a buddy cop movie is that it must also be a buddy movie. When there’s a story independent of the comedy, the traditional tough guy/wise guy routine doesn’t work. One cannot exist solely to serve as a foil to the other. Both characters need drive, nuance, and purpose. A dynamic must be forged. The archetypes of the comedy duo can exist, but they must serve simple as a foundation for character. It can’t be so simple as big/small, masculine/metrosexual, grunt/shriek. Unfortunately, that’s all that distinguishes the relationship between Hart’s Ben Barber and Cube’s James Payton.

In Ride Along 2, we discover that Ben is now a probationary officer, having been inspired to join the force after the events of the first movie. He’s also set to marry James’ sister, Angela (Tika Sumpter), a fact James grew to grudgingly accept after Ben earned his respect on their previous go-around. Otherwise, everything else is pretty much the same. Last time James didn’t think Ben was good enough for his sister. This time he doesn’t think Ben is good enough to be a detective. Once again, Ben must “ride along” with James to prove that he is worthy. So the duo is off to Miami–portrayed as 99% breast implant–where the pursuit of hacker AJ (Ken Jeong) gets them mixed up with nefarious, two-faced businessman Antonio Pope (Benjamin Bratt). Hart riffs, guns pop, boobs bounce. You know the drill.

As in the first film, director Tim Story keeps the action to a minimum, opting instead to focus on the improvised verbal sparring of Hart, Cube, and Jeong, who’s as grating as ever. Story even hobbles the film’s bravado set piece–a high-octane car chase down a Miami thoroughfare–by intercutting animated sequences that signify how Ben’s prowess at a Grand Theft Auto-adjacent video game prepared him for such a scenario. Not only does such a sequence resonate as a cheap way for Story to simplify the action, but it also resurrects the first film’s lamest conceit: that Ben’s gaming talents translate to real-life auto and weapon expertise. Hillary Clinton was right!

None of it’s very funny, either, which is a shame because the first Ride Along found ample humor in Hart’s nonsensical digressions. Here, Hart milks the most laughs from Ben’s reactions to the moments that were meant to be humorous. Watching him fall into a chicken coop isn’t funny. To see him pluck feathers from his hair and remark on how ridiculous that is afterward? Hilarious. As is often the case with Hart, the funniest moments feel improvised and, as such, weirdly detached from the movie. It’s not Ben we’re laughing with, but Hart himself.

That’s fine and all, but it doesn’t make the case for the Ride Along series as any kind of great “buddy cop” movie, especially when you factor in the non-entity that is James. Not only is the character non-existent on the page, but Cube looks positively listless. He can absolutely be a charismatic presence onscreen and onstage, but he’s never been one to make bad material great. He’s not naturally funny. And he’s not that nuanced of a performer. Simply put, he thrives when he has good material. And Ride Along 2, unfortunately, is not good material.

Movies like these rely on character. Rush Hour, for example, riffed on familiar formulas while still allowing Chris Tucker and Jackie Chan a chance to get weird. Both were the straight man. Both were the wise guy. The same goes for Eddie Murphy and Judge Reinhold’s dynamic in the Beverly Hills Cop movies. There was a spontaneous, unpredictable interplay between those characters, the sense that either one could surprise you at any moment. Hart, the firecracker that he is, has a fitting comedic (and crime-fighting) partner out there somewhere. But it’s not in the Ride Along series.