Kendrick Lamar met with President Obama in the Oval Office

"Can you believe that we’re both sitting in this Oval Office?" POTUS asked K.Dot 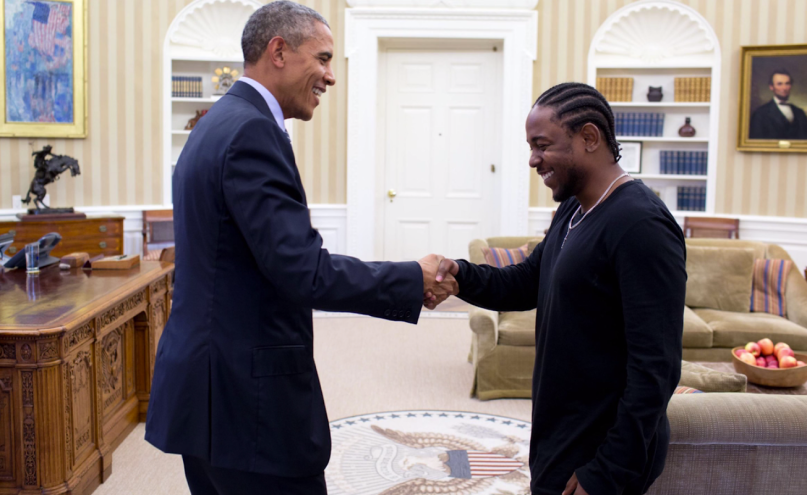 The relationship between hip-hop and politics hasn’t always been a pleasant one — just ask FOX. But over his years in office, President Obama has done his part to change the narrative. Most recently, he welcomed one of the most influential names in modern rap music, a man who put a bunch of rowdy Compton residents on the White House lawn for the cover of the best album of the year, into the Oval Office: Kendrick Lamar.

The moment was likely as much of a fanboy moment for one as it was the other, as POTUS named Lamar’s “How Much a Dollar Cost?” his favorite song of 2015. Either way, the surreality of the first black President sitting in the country’s most important office with a young man who made a name for himself through hip-hop wasn’t lost on Obama. According to senior adviser Valerie Jarrett, Obama turned to the “nervous” rapper and said, “Can you believe that we’re both sitting in this Oval Office?”

Kendrick didn’t let the opportunity go to waste with just sitting, however. As revealed in a new Top Dawg Entertainment video supporting youth mentoring, Kendrick and Obama discussed “topics concerning the inner cities, the problem, the solutions, and furthermore embracing the youth.” Images of the meeting, including the pair hugging it out, can be seen in the clip entitled “Pay it Forward”.

Directed by Dave Meyers & The Little Homies, the video is Lamar’s way of promoting the government mentoring program My Brother’s Keeper. In the short message, Kendrick explains that he wouldn’t be where he is today without “the presence of an older acquaintance telling me what’s right and what’s wrong. Telling me the pros and cons of every move I was about to make. Telling me the best way to plan success for my future.” Watch the video below.