Live Review: The Decemberists at San Francisco’s The Masonic (12/31)

"A Decemberists’ New Year’s Eve is going to be a little dour." 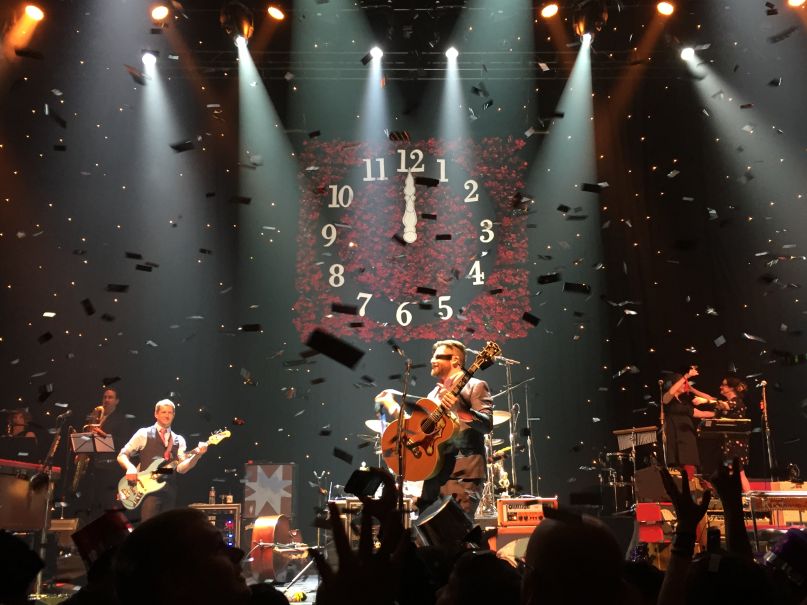 Playing their first show in San Francisco in five years, The Decemberists‘ bid farewell to their namesake month and the year at large with an energetic set that reached back through their sizable catalogue and featured an array of memorable moments. Meloy’s stage presence was in full force, feeding the crowd with stories of his wife’s time as a hot dog vendor and later passing his acoustic guitar through the crowd in lieu of proper crowd surf.

Despite the often-morbid tone of the band’s lyrics, the evening was indeed a festive affair. San Francisco natives Thao & The Get Down Stay Down kicked things off with an hour-long set that made converts out of any audience members who weren’t familiar with Thao Nguyen’s harmonic, brash brand of rock.

If there were any skeptics left before the band combined their song “Move” with the lyrics of Ludacris’ “What’s Your Fantasy”, they were quickly converted. Still, Thao & The Get Down Stay Down acknowledged that much of the crowd might not be aware of their work.

“This is a new song,” said Thao, previewing their forthcoming album, A Man Alive, “although if this is your first time with us, I suppose every song is a new song.”

The sentiment held true even after Thao and her bandmates relinquished the stage to Colin Meloy and the Decemberists. Despite the masses on the floor who sang ever word, the cheers that erupted each time guitarist Chris Funk struck but the first few notes of a song, there was something fresh in hearing old classics like “The Infanta” and “July, July!”. The band seemed renewed, perhaps thanks to their self-imposed hiatus that the New Year’s Eve crowd was only too happy to bid farewell to with the passing of 2015.

The headlining set began with Meloy taking the stage alone, where he offered acoustic renditions of “The Apology Song” and “Red Right Ankle”. In reference to the former, he told the crowd that in seeing out 2015, it was best to start with an apology. As Meloy launched into “The Crane Wife 1 & 2”, one by one his fellow musicians took the stage, a wonderful illustration of their collective power and individual contributions.

Jenny Conlee arrived first and settled in behind her organ, while Nate Query and John Moen hit the stage in dapper outfits to take their places at the bass and drums, respectively. Then came Chris Funk with an expression equal parts scowl and smirk, and behind him back-up singers Kelly Hogan and Nora O’Connor. Finally, there was the horn section, a trio booked especially for the New Year’s Eve performance. Together the musicians exhibited an irresistible chemistry.

Their unity was perhaps most pronounced when Meloy graciously accepted a flask from a member of the crowd, and after taking a few sips, passed the vessel around to all nine people on stage.

Never a band to take themselves too seriously, The Decemberists opted to perform a cover of The Outfield’s “Your Love” as the lead-up to the New Year’s Eve countdown. With the full swagger of a punchdrunk lounge singer, Chris Funk embraced lead vocal duties, singing the chorus (“I just wanna use your love tonight/ I don’t wanna lose your love tonight”) in a helium-caliber falsetto to the crowd’s immense enjoyment.

As balloons and confetti rained down, they stuck up a quick take on “Auld Lange Syne” before transitioning to a cover of Leonard Cohen’s “Don’t Go Home with Your Hard-On”, which was somewhat inevitably overshadowed by the sounds of balloons popping underfoot, a jarring sound effect that would carry on through the group’s set and encore.

Still, the excitement in the air and glee of the performers on stage was more than an adequate remedy. Several times Meloy tried in vain to get a feathered “Happy New Year’s” band to stay atop his head, and when the group returned for their encore, it was with champagne bottles in hand, one of which was given to the crowd with instructions that each person take a sip and pass it on.

Despite The Decemberists’ best intentions, their New Year’s Eve show wasn’t dour in the slightest. It was energetic, communal, cathartic, and revelatory. When Meloy asked for a show of hands from people who’d traveled long distances to attend the show, most of the venue raised an arm. There is a reason that after fifteen years and seven albums, enthusiasm for their work hasn’t waned – the Decemberists are the type of band you want at your New Year’s Eve party, even if it may require a few murders.