Old 97's, The Minus 5, and The Jayhawks also joined in at Peter Buck's Todos Santos Music Festival. 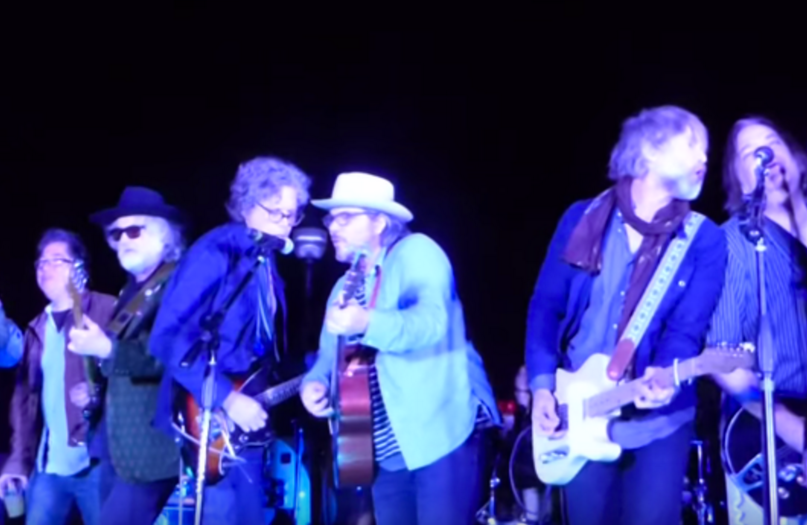 Todos Santos Music Festival is an annual two-weekend benefit event thrown by R.E.M.’s Peter Buck. The festival kicked off this past weekend in Todos Santos, Mexico, and there were a few notable moments inspired by the late David Bowie.

First came a pair of covers from Filthy Friends, a one-off supergroup led by Buck himself and Corin Tucker of Sleater-Kinney and featuring drummer Bill Rieflin, The Young Fresh Fellows/The Minus 5’s Kurt Bloch, and The Minus 5 frontman Scott McCaughey. The band took on “Jean Genie” and, along with R.E.M.’s Mike Mills, “Rebel Rebel”.

The big number came at the end, however. Jeff Tweedy was weekend’s headliner, and he brought along his bandmates from Wilco and his son Spencer. Joined by members of Filthy Friends (including Buck and Tucker), The Minus 5, Old 97’s, The Jayhawks, and Mills, Tweedy and friends closed out the festival with a gang-chorus performance of “All the Young Dudes”. With the rousing and memorable chorus, it was both a fitting closing number and a beautiful homage to one of the last truly innovative artists.

Watch fan-shot footage of the various performances below.

“All the Young Dudes”: